This classic Victorian-era dessert of fresh peaches, vanilla ice cream, and raspberry sauce is easy to prepare and makes an elegant last course.

I think it’s fair to say that most desserts prepared in the French style could be described as elaborate. However, this French dessert is delightfully simple. It was created by famed chef Auguste Escoffier around 1892 to honor Australian opera singer Nellie Melba.

Because this recipe relies on few ingredients, use the best of each available. In Escoffier’s words, “Pêche Melba is a simple dish made up of tender and very ripe peaches, vanilla ice cream, and a purée of sugared raspberry. Any variation on this recipe ruins the delicate balance of its taste.”

Predictably, I deviated from Mr. Escoffier’s advice – but only a little! Peaches are not yet at their finest, but they are already showing up at market and I could not resist their scent. The peaches I bought were slightly tart but they mellowed when layered with the other ingredients.

Also, I used Polaner All Fruit Seedless Raspberry Spread in place of the fresh raspberry puree. It’s has very little sugar added and it’s something I keep in my pantry.

There’s not a lot of prep involved aside from peeling, pitting and slicing the fresh peaches. You can do this ahead and toss the slices with lemon juice to prevent browning, then store them in the refrigerator until time to serve. If your peaches are tart as mine were, you can sprinkle a little sugar over them before chilling.

One small thing I do when serving layered ice cream desserts (affogato especially comes to mind!). I portion ice cream ahead of time and store the scoops in the freezer on a baking sheet. I like to do this because 1.) I’m the world’s messiest ice cream scooper and 2.) any step I can save myself during a dinner party creates less stress and keeps the party rolling.

I like to serve Peach Melba with rolled wafer cookies, which can be found prepackaged at most grocery stores. Pirouettes are widely available, but the French butter cigarellos I used can be found at kitchen specialty shops and import stores (Biscuiterie du Quercy).

Peach Melba is the perfect dinner party dessert, if you ask me. Not only is it super simple to prep, it holds a symphony of beautiful flavors. It’s a popular offering on restaurant menus today, but not many people know its origin story, which makes for excellent dinner conversation. 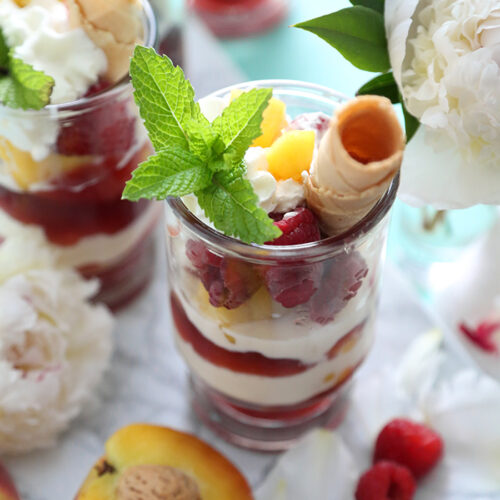 For fresh raspberry puree, place 1 1/4 cups raspberries in a blender. Add 1 cup powdered sugar a little at a time. Sieve to remove seeds. Refrigerate until ready to use.
Keyword auguste escoffier, easy, french dessert, savoy hotel, summer
Tried this recipe?Let us know how it was!

This looks really delicious. Its definitely a must try

Your work is so full of useful information.