Have you ever heard of walking tacos? They have all the ingredients you’d imagine a taco would have like ground beef, cheese, lettuce (et cetera) but instead of being layered in a taco shell they are stuffed in mini bags of Fritos. Their portability makes them perfect for camping, picnics, or just for eating in front of the TV.

Well, this recipe is a lot like that except with banana pudding!

This all started when I was in Target looking for anything but bags of mini Nilla Wafers. I wasn’t sure what to make with them but I couldn’t pass them up. Nilla wafers are a pantry staple for me and they don’t always make it into a recipe (if you know what I mean).

Another important question – have you ever stuck your nose inside a freshly opened bag of Nilla wafers? If not, I recommend doing so ASAP. It’s like inhaling vanilla birthday cake.

This recipe makes about 10 servings.You’ll pour about half the contents of each Nilla Wafers bag in a bowl so you can layer the pudding and bananas easily. Give the bananas a quick toss in lemon juice so they don’t brown.

The cherry is optional but it seriously increases the cute-factor because it matches the bright red “Nilla” on the front of the bag.

After these are assembled you can serve them immediately but the wafers will be crunchy. Instead, you can store them in the refrigerator for 1-2 hours so the wafers become soft like traditional banana pudding.

Y’all. These are so much fun and talk about easy clean-up! Be sure to stick a disposable spoon in each bag before serving. I like birchware spoons which are biodegradable. 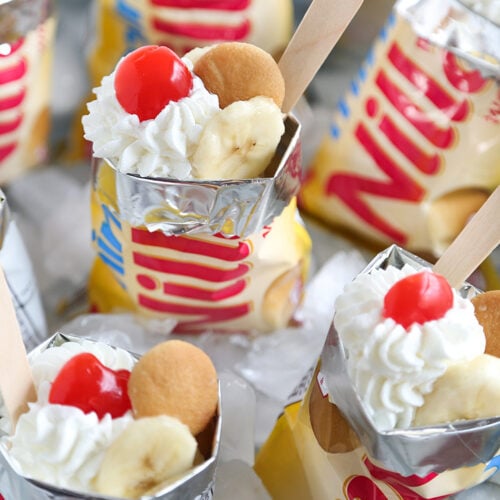 Banana Pudding in a Sack

These are adorable and such a great idea for easy eating and easy clean up!

I love these! They would be perfect for parties. Your a genius Heather!

Ugh, your creations are sooooo amazing!!! Love your blog!

I plan to make these for snack time in an after school program at my church. The kids are gonna love them!

Where can I get these little snack pack baggies

I would like to do this for camping, is it possible to use instant pudding?