Black forest cake has been on my baking bucket list for ages. I’ve attempted it several times – and made it as far as the deep chocolaty cake layers – only to find that my jar of cherries had gone missing (i.e., eaten by a forgetful me). This time I bought two extra jars and resolved to just make it already!

My previous attempts always gravitated toward the standard 9-inch round double layer cake covered in whip and chocolate shavings et al. But not this time. I’ll claim the muse led elsewhere, but it could just be my inability to ever make something exactly as it is intended to be made. Either way, what resulted is a rather stately black forest-zuccotoesque (that’s not really a word)-dome cake. It’s mighty good, too!

Baked in a bowl.

For the cake layers and dome, you’ll make the same chocolate cake recipe twice. An entire batch of batter gets baked in a bowl (2 quart or larger) and the second batch gets baked into two 9-inch rounds. The rounds get a heaping helping of chopped morello cherries. In most black forest cakes the cherries are left whole, but I chopped them because I wanted this cake to slice beautifully, and I’m happy to report, it does!

The filling is also a bit of departure from tradition. Whipped cream is the usual filling and cake covering, but I used boiled frosting that, to me, resembles a gourmet version of Hostess Twinkie Filling (no kidding!). It is absolutely cloud-like and it holds up better if left standing on a buffet for several hours (as cakes tend to do during our family Christmas gatherings).

I forgot to mention the Kirsch syrup! All the cake layers get a good drenching of Kirschwasser syrup that’s mixed with morello cherry juice. As you can imagine, this makes every bite moist and SO flavorful. If you can’t find Kirschwasser locally, consider infusing a batch of my Homemade Cherry Liqueur. It works beautifully in this recipe.

My inspiration for the little chocolate decors comes from the hand-carving on black forest cuckoo clocks. Oak leaves and pine cones are a common motif, and I decided they should be included somewhere on this cake. Ghiradelli recently sent me a few packages of their dark chocolate melting wafers, so I used them in the molds instead of taking pains to temper chocolate. They turned out pretty cute, and they taste good, too!

This cake takes a bit of time to make, and even though I made it in one day, I can’t recommend doing that. It’d be much easier and less stressful to make the cake layers one day, and the fillings/frostings the next. This cake is certainly time consuming, but it’s very much worth the time and effort. It may just be my favorite cake to date! 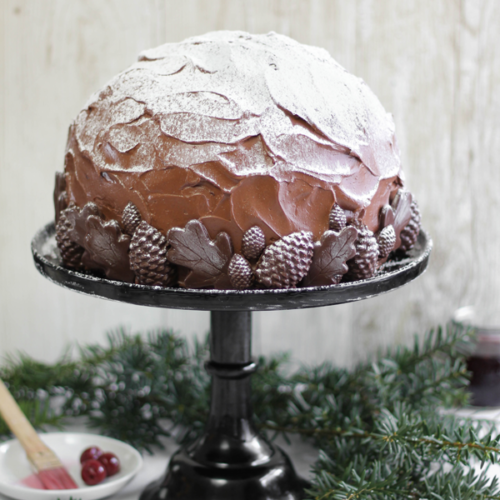 Heather Baird
Stock up on semisweet chocolate before making this recipe. The chocolate frosting uses 1 1/2 lbs., which is more than I’ve ever used in a single frosting recipe, but the end result is a true chocoholic’s dream! I suggest making this cake over the course of two or three days. Chilling the dome cake before filling it is essential, otherwise it will be too soft and break apart under the weight of the whipped filling- so don’t skip that step! Please read the notes at the bottom of this recipe for additional tips.
5 from 3 votes
Print Recipe Pin Recipe
Prep Time 4 hrs
Cook Time 2 hrs
24 hours 1 d
Total Time 1 d 6 hrs
Course Dessert
Cuisine American, German
Servings 24

For the two 9-inch cake rounds

For the dome cake

Some people have experienced trouble with the boiled filling in a previous recipe I developed. It’s usually because the flour and milk mixture wasn’t cooked long enough on the stove-top. Make sure to cook it until it is thick like pudding, and cool it completely until it has the consistency of set custard. The boiled frosting may be replaced with 3 cups heavy whipping cream beaten with 3/4 cup of granulated sugar. It won’t hold up as well if left sitting out on a buffet for hours, so you’ll have to store the cake in the refrigerator at all times. This is a rather large cake – the equivalent of two double layer cakes! I serves up to 24 people, so don’t guffaw at the amount of butter, sugar and chocolate – remember, one person is not eating the whole cake, just one (maybe two?) slices. Calorie counters – look away. It’s okay to use semisweet chips in the dark chocolate frosting – I did. Just make sure it’s a brand that contains some amount of cocoa butter in the ingredients. Of course, high quality chocolate is preferred. Morello cherries in light syrup can be found at Trader Joe’s. If you don’t have one in your town, grocery stores usually stock “dark pitted cherries in syrup” – buy two 12 oz. cans of those – they’ll work fine.
Keyword black forest cake, boiled frosting, cherry cake filling, dark chocolate frosting, dome cake, kirschwasser
Tried this recipe?Let us know how it was!

I love it! You could even do white version or a mixture of the two! Simply you are cake queen, I am so going to try a dome cake this year.

This is one of my favorite cakes and you managed to elevate it to a new level. I am so happy I started following your blog those years ago. Please continue to make these wonderful desserts. Each confection has its own story and that's truly something unique to your style of doing things. They bring a smile to my face. 🙂

Jenn @ Once Upon a Tier

Those little chocolate are so cute! Beautiful as usual 🙂

Wow Heather, this looks absolutely amazing!! I was planning on making the Yule Log Cake from your cookbook for Christmas, but this one looks pretty perfect too… I might just have to make 2 cakes 😉

You continue to outdo yourself! Looks beautiful and delicious!

Heather is a friend of mine. I saw her this week and she brought me a piece of this cake. IT WAS FABULOUS! I didn't know what it was called, but since this cake has forest in the name I will tell you that it was like Animal Kingdom and the cake was the deer and I was the lion. I slayed it, People. All but licked the plate. Totally recommend this recipe. (Thanks for the cake, H. Totally made my day!)

Wow. Amazing! Words truly escape me. Black forest cake is my fav! Maybe, just maybe I could make this happen. 😉

So Christmassy! I love chocolate & cherries together. The powdered sugar "snow" is lovely, too.
Such a beautiful cake, Heather.

I love it, it's perfect and look delicious

black forest cake is my favorite cake of all time and i bake it quite a lot. never thought about making it dome shaped. thanks for the inspiration, definitely going to try this next time.

I don't think that I have ever seen such a beautiful Black forest cake before this one! I never cease to be amazed by your talent!

This is gorgeous! I love how you incorporated elements of the traditional cuckoo clock. So smart and inventive, and the flavors sound wonderful! Beautiful post, Heather 🙂

What a beautiful and unique way to present a good 'ol favorite dessert!

I love your comment about how we shouldn't "guffaw at the amount of butter, sugar and chocolate", since it's for many people–but I like to say some cakes I make are so rich, they're like a million bucks! I'd certainly feel like a million bucks if I made a cake so beautiful. Probably won't make the entire thing, but I might try the vanilla frosting and cherry filling on a simpler chocolate cake, since I've tried boiled frosting once before and it didn't come out as perfect as i would have hoped. Bravo as usual!

This is gorgeous!!!! I'm dying to try making a dome cake, because that looks incredibly impressive! Although mine would probably end up crooked or something..

Your cake is so lovely! Just beautiful! I’m wondering what chocolate molds you used?

I love your use of candy molds to decorate the cake, very nice design!

This is amaz-balls!! How can I adjust the recipe to make an 8inch cake instead of 9inch??

I made this cake for my Mother's 90th Birthday. We enjoyed it yesterday. It was like eating a bit of a heavenly cloud. Mine didn't look as beautiful as yours, but, none the less, it looked impressive and wowed everyone. Thank you. I'll make it again.

I made this for my husband's family for Christmas; while the finished product and every component was moist and delicious, it did not slice and hold together as nicely as yours! It didn't really look pretty on the plate. It was probably because it was so large and tall that I was trying to give people thin slices and it would fall apart. However, like I said, it tasted fantastic and everyone was very happy! The only thing I changed was I used fresh cherries chopped and mixed with a little sugar and cherry jelly instead of the morello cherries.… Read more »

This is the most fabulous take on our family's favorite dessert that I have EVER seen. I will never make it, because I am old and lazy, but maybe I can get one of my daughters to do it……….

What is meant in the dome directions by, “Wrap in plastic wrap and place in the freezer to firm, about 2-3 hours.”?

Hi Laura! That instruction doesn’t belong there. I’ve removed it. It must have accidentally gotten pasted into the recipe when we added it to the new recipe card.

This is the most beautiful cake I’ve ever seen. As soon as I saw it I wanted to make it. You did such a beautiful job. I made a version of this. I used my own Ermine Buttercream recipe which is almost the same as yours, except it has 1/2 cup flour for the two cups milk. It works for me so I just went with it, and for covering the outside I used a whipped ganache consisting of 8 ounces of dark chocolate and 1 1/4 cup cream. I had a little issue with the cake in the bowl.… Read more »

Hi Nicole!
Thanks so much for trying the recipe – and reporting your findings! It’s a big cake, isn’t it? And made for sharing. Perfect for the holidays.
I bet the whipped ganache was wonderful.