This Easy Candy Bar Pie is a simple fix when you need dessert in a hurry. The rich, chocolaty filling requires just three ingredients!

This recipe is some of the easiest pie making you’ll ever do. Especially if you opt for a ready-made graham cracker crust. I happened upon it while browsing through my very first cookbook. It was a community cookbook called Butter ‘n Love that my Aunt Dolly gifted me in 1984, when I was just a little kid. At that time, the only baking I’d ever done was in my Easy Bake Oven. Nobody had ever given me a cookbook before! It instantly made me feel a little more grown up.

I’ve kept the cookbook all these years, and just recently decided to thumb through it again. There under ‘Breads, Rolls, Pies & Pastry’ was a pie recipe that surprised me with 3 ingredients. How good could a pie with so few ingredients be? According to its author, Linda Underwood: “Very good.”

She was right! However, I swapped the Cool Whip for real whipped cream beaten with a touch of sugar. It is my preference.

There’s absolutely no shame in buying a ready-made crust, and it makes this recipe come together in no time flat. But I don’t keep ready-made graham crusts on hand. What I do keep on hand is a massive jar of graham cracker crumbs. I made my own crust but you don’t have to. You can find my scratch crust recipe in the notes of the recipe card. Like the filling, it’s also just 3 ingredients.

Crumble and melt 6 Hershey’s Mr. Goodbars in a bowl, and heat in the microwave (or over a double boiler) until the chocolate is smooth. Let it cool until barely warm, then fold it into some sweetened whipped cream.

That’s all folks! That’s it for the filling. With just three ingredients I didn’t expect it to be so rich, but it is. If you’re not into peanuts, you could use your favorite plain chocolate bar in place of the Mr. Goodbars.

I purchased 3 Mr. Goodbar XLs (4.4 oz. each) instead of 6 regular bars (1.75 oz. each). So I had about 1/2 a bar leftover. I chopped it up an put it on top of the pie. I also tossed on a few candied peanuts that were hiding in my pantry. You could do the same, but this pie is plenty rich enough without additional toppings.

This chilly Easy Candy Bar Pie recipe will definitely see a lot of action this summer. I plan to get myself some ready-made pie crusts to make the entire effort a no-bake affair. Father’s Day is coming up, and my dad loves my Classic Peanut Butter Pie recipe, but this one may have to make an appearance, too! 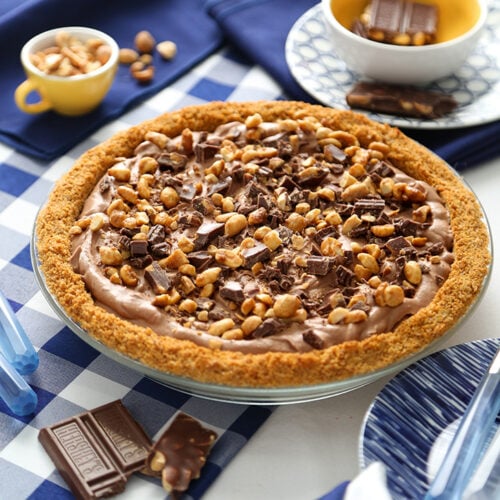 Heather Baird
It doesn’t get easier than this! Easy Candy Bar Pie uses just three ingredients for the filling. If you use a ready-made pie crust, you’ll need just 4 ingredients total for the entire pie. It’s smooth, rich, and kept chilled so it’s great for a cool treat on a hot day.Hershey’s Mr. Goodbar candy can be found at most US grocery stores in the candy aisle. You may also substitute your favorite chocolate bar. Use chocolate that has cocoa butter listed as an ingredient. This ensures the chocolate will incorporate well with the whipped cream.The recipe calls for a ready-made graham cracker crust, but if you’d rather make it from scratch, see the notes below for my recipe. It’s also just three ingredients, but does require 10 minutes of baking to set the crust. Also see notes for garnishing ideas.
4.60 from 27 votes
Print Recipe Pin Recipe
Prep Time 15 mins
2 hours chill time 2 hrs
Total Time 2 hrs 15 mins
Course Dessert
Cuisine American
Servings 10

For a scratch-made graham cracker crust, use the following recipe. 1 cup graham cracker crumbs 1 tablespoon granulated sugar 4 tablespoons butter, melted Preheat the oven to 350F. Combine the crumbs and sugar in a bowl; whisk. Pour in melted butter and stir until the crumbs are coated with the butter and has the appearance of wet sand. Press the mixture into a standard 9 inch pie plate (not deep dish). Bake for 10 minutes. Cool completely before adding pie filling.   Garnishes: Buy an extra candy bar and chop half of it into pieces for pie topping. Toss on a handful of plain or candied peanuts. Make some chocolate shavings by running a vegetable peeler down the side of a frozen chocolate bar. Do this on a cutting board or plate, and transfer the shavings using a spoon. The heat from your hands will melt the chocolate. An even quicker version! If you’re super pressed for time, make the pie exactly as it was originally written. One standard-size tub of frozen Cool Whip or other nondairy topping (thawed) can be used in place of the heavy cream and sugar. Fold together with the melted chocolate bars and proceed as directed.  This recipe was adapted from a small town community cookbook called Butter ‘n Love published in 1984.
Keyword 3 ingredient pie recipe, candy bar pie, easy pie recipe, graham cracker crust, heavy cream, Mr. Goodbar, summer pie
Tried this recipe?Let us know how it was!

I must try this! Easiest pie to make I have ever seen. Thanks for sharing..

I’m thinking of swapping in Hershey Bars with Almonds…aligned with my family’s tastes. An awesome recipe just before Father’s Day. With it being a blistering 100 degrees today, I can keep the oven off. I can also make this instead of placing an order at the bakery! “Refrigerate Leftovers”. My only question is, what leftovers?! Thank you, as always!

That sounds like a wonderful variation! Good point about the leftovers. 🙂

I have been making this pie with Hershey Almond bars for years. Everyone loves it!

I use Hershey bar w/almond or without
I store my pie in, cut slices as need. Delish

I keep mine in freezer.

Hello can you use a different candy bar.

Hi Denise, yes! You can use your favorite chocolate bar.

How about a Butterfinger bar? Yummy

Thats sounds good too. I have the Mr Goodbar pie in the frig right now. One more hour to wait.

Would a caramello or snickers work or just Hershey bar combos?

Hi Jessica! Someone on social media mentioned that they tried it with Snickers bars and it worked well. Seems like Caramello would work fine too, it just wouldn’t be as chocolatey. I haven’t tried it so I can’t say for sure.

Thank you! I will give it a whirl and see what happens 🙂

I can hardly wait to make this pie, it looks amazing, my son asked if I could make it with Snickers 😋 I thought the cookbook you got it from looked interesting so I looked it up, however, Amazon had a bunch with the same name with recipes from different civic and religious organizations. Who put out the one you have, I think I would like to try and find a copy. I’ll let you know how my pie comes out. Thanks for a great recipe.

Hi Albina, I think these cookbooks were from an independent press that specialized in books for fundraising purposes for schools, churches, rotary clubs, etc. The cover of mine is nearly torn off, and some pages are missing. I’m not sure what the organization was. Aunt Dolly passed away some years ago, so I’ll have to find out from other family members. I’ll report back here when I get the info. Thanks so much! I hope your pie turns out great – someone on social media told me that snickers work well!

I normally use the Hershey’s Cookies ‘n’ Cream bars chipped up in mine. It’s mouth watering yummy!!

I’ll have to try that! It sounds delicious.

I made it with Hershey bars and was great. No nuts for our family. Could you use a baking chocolate bar like Giraldi?

Hi Cheri,
Thanks for letting us know how it turned out! Yes – you can definitely use the Ghiradelli semisweet or milk chocolate baking bars. They are sold in 4 oz. tablets. So you’d need 2 1/2 bars (10.5 oz.) total.

Thanks so much for the reply and sharing the recipe. I’m still an uneasy baker and enjoyed all the compliments I got !

One thing you can do is make it with crushed Whoppers and then freeze it, it has a very nice crunchy texture and a great flavor

Can u use sweeten condensed milk not milk

Hi Johnetta,
Sweetened condensed milk won’t work with this recipe. You’ll need to use the heavy cream called for so the filling will whip up nice and billowy.

I made this pie, it has really good flavor, but the pie ingredients did not fill my crust the way it looks in the picture. So, I took a cup of warmed peanut butter and mixed it with powdered sugar to put on top of the candy bar layer, then a tub of frozen whipped cream on top with cut up candy bars on top!

That sounds really delicious! I wonder if the pie crust was deep dish? Glad you found a way to make it work!