‘Tis the season to enjoy alll of the eggnog! I’ll take mine in the form of these mini eggnog bundt cakes. The eggnog flavor really carries through, and it’s enhanced by a golden rum syrup that soaks into the sponge. Gingerbread antler cookies are too cute and so tasty. Place a cookie atop each bundt cake to create a really sweet table display.

Start with the fluffy cake batter portioned into four (or more) mini bundt pans. This recipe will make about 8 minis, or you can bake the batter into one large 12 cup bundt pan.

Bake the bundts for 28-30 minutes. Mine cooked perfectly in 30 minutes. Next, bubble up some butter-rum soaking syrup on the stovetop. Poke holes in the cakes, then spoon or brush on the syrup.

Nothing beats a classic!

For the antlers, whip up a batch of my gingerbread house dough. It’s quite good and easy to work with. The antler cutter I used can be found here. Cutting the shapes is easy when the dough is chilled, but it’s a little fiddly getting the cookie dough out of the cutter. Even with a floured cutter I had to coax the dough out with a pinky finger inserted into each antler-end.

You’ll need 8 cookies for toppers, or if you’re baking the batter in one large bundt pan you could serve them on the side. Either way, you’ll have lots of gingerbread cookie dough left over if you make the entire recipe. But since this is cookie season, I’m sure you won’t mind stamping out some extra gingerbread folk!

Stand an antler cookie upright on top of each bundt cake and insert a toothpick behind a tall end of the antler. The toothpick keeps the cookie propped upright.

These mini eggnog bundt cakes are so tender and lovely. The eggnog is truly present in flavor with the rum sauce carrying a light boozy note. These would make wonderful gifts, or arranged together for a fun centerpiece.

The cookies will soften over time if left on the moist cake. Serve these soon after you assemble them. 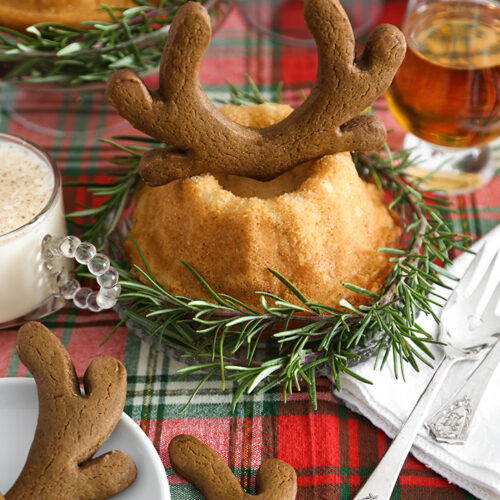 What to expect: These mini cakes have a soft sponge and a moist texture with notes of rum. The eggnog flavor is obvious and so delicious. Top the cakes with the cookie antlers up to an hour before serving. Any longer and they will lose their crispness over time. The cookies will soften due to the moisture of the cake. Some of my cakes that sat 24 hours topped with the cookies (covered in plastic wrap) softened considerably. The cookies were still delicious but their texture was fragile and more cake-like than cookie.  For one large cake, coat a 10 or 12 cup bundt pan with flour-based baking spray. Prepare batter as directed. Spread evenly in the bundt pan and bake for 45-50 minutes, or until a toothpick tester comes in clean. Cool in the pan 10 minutes. Poke holes in the bottom of the cake using a long skewer and pour some of the rum syrup over the cake. Let stand until absorbed, about 20 minutes. Turn the cake out of the pan and brush with more of the syrup.  This recipe was researched and adapted from several recipes online, with thanks and kind regards to The Little Epicurean and Homemade Hooplah. The rum syrup recipe is adapted from King Arthur Baking’s Caribbean-Style Rum Cake.
Keyword eggnog, golden rum syrup, nutmeg, unsalted butter
Tried this recipe?Let us know how it was!