Celebrate the arrival of fall with this seasonal take on everyone’s favorite comfort food. Pumpkin Spice Bread Pudding is light and custardy while Maple Toffee Sauce sweetens it with butter and brown sugar notes.

Fall doesn’t officially begin until next week, but it’s already arrived in my kitchen. Recently I’ve been seeking out the coziest, most delicious fall comfort foods that will fit all occasions. This Pumpkin Spice Bread Pudding is a perfect example. It’s simple and causal enough for a weekday bake, but also totally holiday dinner-worthy. The Maple Toffee Sauce really makes it special.

Start this recipe with a loaf of soft brioche. Cube it up or tear it into bite-size pieces.

Whisk together the custard ingredients and add a whole can of pumpkin puree to the bowl. When buying canned pumpkin, read he label carefully to make sure you’re buying pumpkin puree and not pumpkin pie filling – been there!

Stir in the brioche and toss to coat. Brioche is soft and cottony, and will do a good job of soaking up all that delicious pumpkin spiced custard.

Pour it all in a 2 quart shallow baking dish and cover with plastic wrap. Refrigerate for about an hour.

You could also use French bread in this recipe, but it has a denser texture. So, if you use it instead of brioche, plan on letting it soak for at least four hours or overnight.

The toffee sauce is so easy to make. Use English brickle toffee bits, which can be found next to the chocolate chips in most US grocery stores. You’ll stir them together with butter and maple syrup until melted, then whisk in evaporated milk. The sauce adds some sweetness and buttery toffee flavor to this pudding.

You just can’t get any cozier than this, friends! It’s a lovely dessert, but I’ll admit to having this for breakfast a few mornings in a row. It’s a decadent way to start the day, and could be a nice breakfast offering if you’re having overnight guests for Thanksgiving this year.

Bread pudding is often my go-to dessert for family gatherings and holiday dinners (like this one, which is over-the-top in the best way possible!). And who doesn’t love something you can make ahead?

Pumpkin Spice Bread Pudding with Maple Toffee Sauce will be in heavy rotation at my house this season. I hope you’ll love it as much as we do! 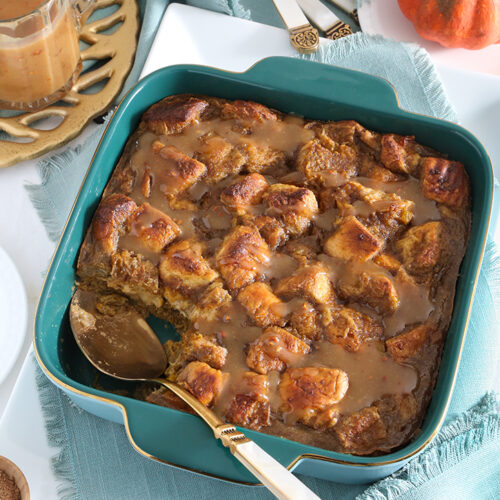 Bits O’ Brickle is a baking ingredient that can usually be found in grocery stores in the baking aisle beside the chocolate chips. Or order it online. French bread can be used in place of the brioche. It will need more time to soak up the custard due to its firmer texture, so plan on refrigerating it for 4 hours, or overnight before baking.
Keyword bits o’brickle, brioche, pumpkin puree, pumpkin spice, toffee sauce
Tried this recipe?Let us know how it was!