Serve up some brunch time fun with these Easy No-Bake Mimosa Pies in pretty glasses. A cup of chilled champagne is stirred right into the zesty orange pie filling.

I’ve had brunch on my mind with Mother’s Day coming up. My regular menu needs a refresh, so I created a brand new recipe based on an old nostalgic favorite. First, can we all agree that the unofficial cocktail of brunch would have to be the mimosa? I think so.

This recipe gives me all the Betty Draper vibes. It’s based on a mid-century recipe called Creamy Jell-O Pie. If you’ve ever made it, then you know it’s practically mousse in a pie crust. In fact, you could probably omit the crust in this recipe and just serve it as mousse. But since I love a graham crust, I patted some buttered crumbs into the bottom of each pretty dessert glass.

The filling starts with a 3 oz. box of orange Jell-O. You probably already know the first step of making Jell-O is dissolving it in hot water. The second step is adding cold water, but instead, we’re adding chilled sparkling wine or champagne. Mix it up well and fold it together with freshly whipped cream.

Pour the filling over the crust, chill, and garnish. It’s so easy! And there’s no mistaking its inspiration with all that champagne flavor sparkling through.

Talk about fluffy! For the best, and tastiest results get Jell-O brand gelatin with no artificial sweeteners or high fructose corn syrup. It’s easy to find because it says this right on the box in a big green bubble. I don’t often use convenience foods in my baking, but I honestly appreciate Jell-O’s versatility. There’s a reason it’s been around for so long!

Served in footed glasses, these easy no-bake mimosa pies look beautiful presented together on a serving tray. If you’d rather enjoy this as pie you can slice, the filling can be poured into a 9-inch graham cracker pie crust. 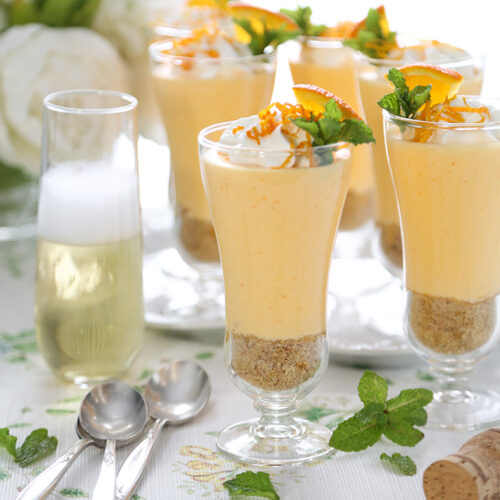 For an alcohol-free version of this dessert, use white sparkling grape juice in place of the champagne. Creamsicle version: Replace the champagne with an equal amount of cream soda. Add 1 teaspoon vanilla extract to the pie filling. Garnish with whipped cream. The crust, filling and whipped cream topping can be made and assembled 2 days in advance. Garnish with the zest, mint, and fresh orange slices just before serving.
Keyword heavy cream, orange Jell-O, pink champange pastry cream
Tried this recipe?Let us know how it was!

For the kiddos, could I use some type of non-alcoholic sparkling fruit cider instead of champagne? Thanks for sharing this recipe, looks fancy but easy.

Absolutely! That’s a great substitute. In the notes I recommend sparkling white grape juice, but you could use whatever your littles like best.

You don’t say to add the sugar to the mimosa filling so I assume copy the garnish instructions?

Hi Kathe,
Yes- so sorry about that. The 3 tablespoons of sugar are beaten in with the 1 cup of heavy cream. Thanks for the heads up!