Fluffy almond cupcakes are filled with delicious plum preserves and topped with a tall swirl of purple buttercream. Lavender sanding sugar makes them sparkle and gives them a crunchy bite.

It’s not hard to guess what inspired these cupcakes! I can practically hear Dance of The Sugar Plum Fairies from the Nutcracker Suite when I look at them. When I was a teenager, my mom would take me to see the live ballet in December, and I’d marvel at the athleticism – effortless leaps and twirls that seemed to go on and on! It was pure magic.

When I found a package of old-school ballerina toppers hidden in my stash of cake decors, I knew I wanted to capture a little of that magic in cupcake form.

This recipe makes a whole troupe of cupcakes!  Plenty for you to enjoy and share with friends. If you do plan to share, you’ll need some extra-tall cupcake boxes (like this) to accommodate the tiny dancers, or you could scale down the frosting swirl just a wee bit! (I’m a frosting girl, can you tell?)

The recipe begins with a one-bowl cupcake recipe. That means that all the ingredients are stirred up in one big bowl and there’s less dishes to do! The cakes bake to a firm yet soft crumb that’s perfect for filling. Damson plum filling is delicious in these cupcakes, and you can find the brand I use here.

For the piped frosting, I used a large drop flower tip (Wilton 2D) to pipe white flowers around the outer edge of the cupcakes. For the center, a large open star tip (Ateco 828) makes a tall soft serve-style swirl.

These vintage-inspired ballerinas got a sugar plum makeover with pinky-purple acrylic paint and German glitter. You can find the ballerinas here, in my pal Amanda’s shop Cranky Cakes.

The plum preserves give the almond cakes a tart, fruity note which is nice with all of that buttercream, but I think my favorite part is the lavender sanding sugar on top. You’ll get a little sugar crunch between your teeth when you bite them! 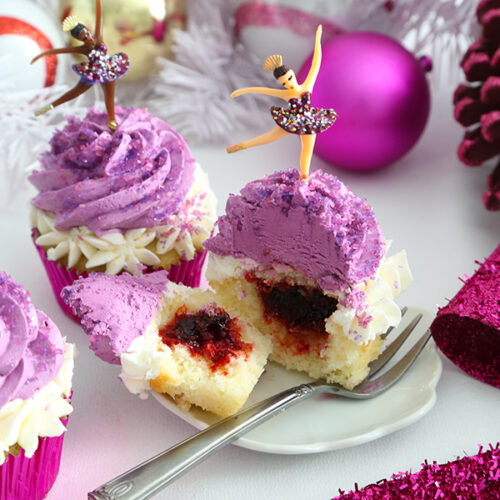 can you use butter?

Can I substitute vanilla instead of almond? If so, would it be the same measurements?

Yes, you sure can! Use equal amounts.