Cream puff cake has a golden crust that puffs high in the pan as it bakes, which forms the perfect container for creamy custard filling. A drizzle of scratch-made chocolate ganache makes this cake pretty and gives it added richness. What makes it extra delicious? Real butter. Butter gives the ganache a beautiful shine and smooth consistency while keeping the choux batter rich and fluffy.

Pâte à choux is one my favorite classic pastry elements. It’s the base for eclairs, profiteroles, savory cheese puffs, and other delicious bites that are carefully piped on baking sheets. I’d never considered the fast and easy option of spreading an entire batch of choux pastry in a dish and baking it as a crust, but it works marvelously! It makes the fluffiest, airiest crust for this cream-filled cake that slices neatly for serving.

One ingredient that you just cannot do without when making choux batter is real butter!

The ingredients are few, using only flour, butter, water and egg. Each one performs a specific function to make a crisp, airy pastry. Flour and eggs give structure, water provides steam to ‘puff’ the pastry, and butter provides texture and, most importantly, flavor. Without butter the texture of the crust would be dense and bread-like instead of airy and light.

Heat the butter and water in a saucepan and then the flour is added all at once. The warm melted butter mixture helps the flour to gelatinize, and when stirred, the mixture will form a neat little ball as it cooks. Spread the ball out on the bottom of the saucepan to let some heat escape, then mix in the eggs one at a time.

Spread the batter into a 13×9-inch baking dish. A rubber spatula coated with cooking spray will make this a quick task.

After the pastry is baked, you’re ready for some creamy filling, which whips up in a flash! You’ll use a mixture of cream cheese, instant white chocolate pudding, and milk. I don’t often use instant pudding in recipes, but in this recipe it’s a real time-saver and doesn’t compromise flavor one little bit!

What’s better than one cream filling? Two! The white chocolate filling is topped with whipped cream, and then a small drizzle of scratch-made ganache.

I couldn’t resist sprinkling on some chopped pecans and serving slices topped with maraschino cherries. This cake was so refreshing served chilled, and the cream puff crust gave the entire cake buttery, decadent flavor.

This cake is potluck friendly, so you may want to bookmark it for your next gathering!

This recipe was developed in partnership with The American Butter Institute for their website Go Bold With Butter! 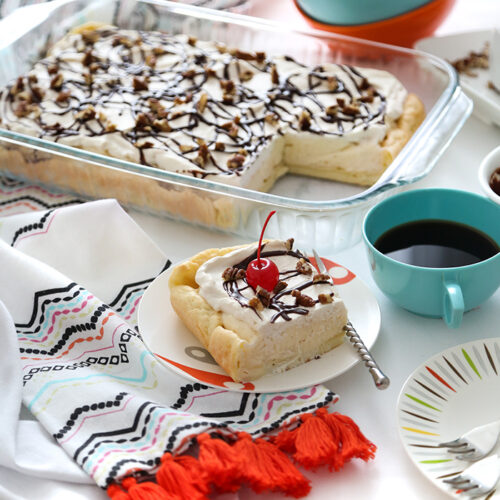 Keyword choux paste, choux puff crust, instant pudding
Tried this recipe?Let us know how it was!

This is such a great and creative idea! I love cream puffs and this cake is simply gorgeous ♥

Hi – I'm writing from the UK! We don't tend to have instant chocolate pudding mixes in our supermarkets, but there is a Jell-O one available at Amazon. Would this do? Is it good enough quality for your lovely recipe? Thanks! Antonia

LOVE this recipe. I make cream puff cake whenever I need something easy to bring to parties. You can switch it up in so many ways with different flavors of pudding. My favorite so far has been butterscotch. YUM!

Hi, how long will this keep in refrigerator?

Ours kept well for 3 days in the refrigerator.

Oh, wow! Thank you for this amazing recipe!  I can’t believe how easy it is to make!

I love this recipe. I tried at home my kids loved. Thanks heaps