This luscious no-bake cheesecake is made using ruby chocolate, a new innovation in the culinary world! It is made from red cocoa beans which yields a naturally pink hued chocolate with mild red berry flavors.

I’ve been eager to work with ruby chocolate ever since it was introduced in 2017 by its inventors, the cocoa producers of Barry Callebaut. You may remember that I first mentioned this chocolate as a gift idea in this December post. It has been unavailable in the US for quite some time.

Just last month it arrived for purchase in meltable callets thanks to Trader Joe’s. Now that it’s becoming more widely available, I wanted to share one of my favorite kitchen experiments – this cheesecake recipe!

I procured my first batch of ruby chocolate callets last year from across the pond, so I’ve had a few months to experiment with its unique flavor.

I can best describe it as a light chocolate that recalls notes of white chocolate, but with the acidity and flavor of red berries. You will not mistake it for white chocolate tinted pink, though. It has its own unique flavors that are deeper, and much more complex than white chocolate. I passed out callets to my friends for sampling to gauge their reactions, and the most common descriptors were red berries, raspberry, strawberry, floral, and espresso.

When melted, the ruby chocolate turns to a pinkish taupe color, which is really beautiful to cast as homemade chocolate bars or to use as a truffle coating. Much as I’d like to claim the color of this cheesecake to be natural, it is only partially so. Ruby chocolate’s color will lighten considerably when mixed with cream cheese, so I helped the color along with a little deep pink gel food color. You could omit this, but I really wanted the color to reflect the unique flavor of the chocolate.

A shortbread crust is pressed into a standard 9 inch springform pan, and then the cheesecake mixture is poured on top.  Freezing the cheesecake will make it easy to unmold and remove from the base, so I recommend doing so.

I couldn’t resist a few edible petals of  dried purple sea lavender (limonium sinuatum). It doesn’t offer much flavor or texture, but it looks beautiful. I also added a few whole red globe amaranth, which I added purely for decoration although they are also edible. You can find the dried flowers I used here, in a variety pack.

Don’t expect this to be a light cheesecake! It really packs a punch with 12 oz. of ruby chocolate. I added dollops of freshly whipped cream on top, which will cut the richness and contrast it nicely.

I crushed a few freeze-dried raspberries between my fingers and sprinkled them on top of the cheesecake, and added a few whole berries, too. This nicely underscored the berry flavors in the ruby chocolate.

I loved sharing this dessert. It was exciting to introduce something so new and different to my friends and family – and to also hear their reactions and responses to its flavor! You can expect to see more ruby chocolate here in the future. I may be its new biggest fan! 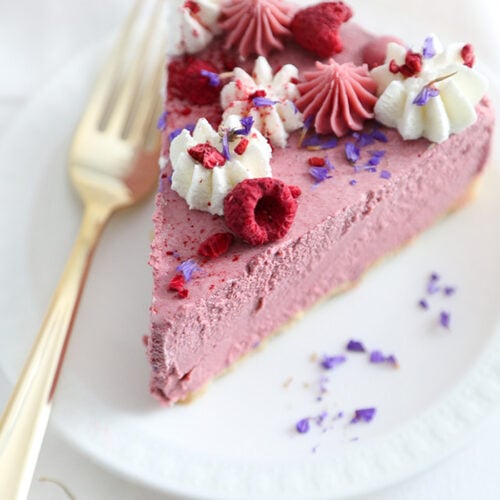 Heather Baird
Be sure to use the correct canned milk in this recipe. Sweetened condensed milk is thick and syrupy, and is the right ingredient for this recipe. Do not use evaporated milk, which is liquid and unsweet. If you are a Girl Scouts cookie-buyer (raises hand), this recipe uses one 9 oz. box of Trefoils.
5 from 1 vote
Print Recipe Pin Recipe
Prep Time 25 mins
4 hours chill time 4 hrs
Course Dessert
Cuisine American
Servings 10

Keyword champagne ganache, edible flowers, no bake cheesecake, ruby chocolate
Tried this recipe?Let us know how it was!

Thanks, Julie! It's unique and very tasty! I hope you get a chance to try it!

This cheesecake is absolutely stunning! I never had ruby chocolate before ♥

Trader Joe's has ruby callets available finally! They really do taste AMAZINGLY berry forward and quite tart, although I think I did see a small amount of citric acid on the ingredients label so TJ is trying to play up that flavor. I'll be trying to turn them into a ruby ganache or buttercream this weekend to go on a pistachio cake (the watercake cake with impeachment frosting, a retro cake described in Vintage Cakes by Julie Richardson – that name, right?!). Thanks for the inspiration!!

This looks amazing…somewhat of a silly question, but how long could it be kept frozen? I'd like to bake it this weekend, but keep it frozen for a few weeks.