I wanted to make something seriously fun to celebrate Halloween this year, but I wasn’t sure what that would be until just a couple of days ago. It’s been years since I’ve seen the movie Beetlejuice (it was released in 1988!) but I recently had the opportunity to watch it again. Even though it’s an older movie, the humor and special effects still hold up today. I loved it as a kid, but I didn’t really catch the meaning of some of the quips and innuendo scripted for Beetlejuice – which was a good thing. He’s crusty, lewd, duplicitous, moldy and a bit cranky, but SO funny!

There was no doubt about it, this cake was going to have a sandworm incorporated into the decor, somehow. I love the movie’s version with graphic stripes and crazy-looking claymation faces. An angry, agitated sandworm will reveal a second head inside the first (which is sooo weird and cool), but we decided to make just one head, mostly because of time constraints.

You might remember my Portrait of Poe cake, or Frankenstein cake, or even this Skeleton Pinata Cake for The Etsy Journal. Creating silhouettes for cakes is kind of my thing now, especially for Halloween-themed cakes. I usually cut the silhouettes from fondant or paint the silhouettes on fondant with black food color, but for this cake I decided to trace the image on wafer paper. The lines were drawn with a food color marker and filled in with a light brushing of black gel food color. The end result was a little bit wavy, which is the nature of damp wafer paper. I’m happy to say the image mostly flattened out when I applied it to the buttercream-covered cake.

The sandworm was fashioned from a large chunk of gumpaste, about 3/4 of a pound! It was easiest to roll a large piece into a body, and then to attach the head after it was placed on the cake. The head is pretty much just a hunk of gum paste, rolled oblong and then sliced down the center. The stripes, lips, and mouth are all fondant attached with a damp artists’ brush. The eyes are red sugar beads.

Zagnut cake filling is a cute nod to the movie, and it’s seriously delicious! Even if you make nothing else in this blog post, I’d recommend trying this cake filling. It’s peanut butter buttercream with lots of toasted coconut and chopped dry-roasted salty peanuts added. There’s also a layer of white chocolate ganache in the center of the cake to fully complete the flavors of the Zagnut candy bar.

I frosted this cake in the style of a grocery store birthday cake with shell piping around the edges. The kitsch felt right! A black, white and silver sprinkle mix (called Mr. Gatsby) also seemed appropriate to jazz up the piping.

I’m not even kidding when I say we were blasting Harry Belafonte’s Banana Boat Song (Day O) and dancing the entire time we were styling and shooting this cake. Maybe you should go ahead and listen to it, too.

How funny is this prop book? It reads like stereo instructions (ha!). I had to have it, and thanks to quick shipping I had it just in time to shoot this project. Just the first couple of pages in the book are printed, and the rest is a blank journal which I’ll use for writing recipes. Those interested in getting a copy can find it here.

I couldn’t resist cutting the corner piece of cake with the sandworm head on it! The sandworm’s teeth are white sprinkles sticking upright in the fondant. I just love that little detail!

The cake is my favorite vanilla sheet cake that is baked in a 13×9 pan. It has a lovely texture and really allows the flavors of the Zagnut filling to shine through. I’m including the cake recipe in this blog post. If you’d like to try to Beetlejuice motif, you can find the silhouette template at this link. 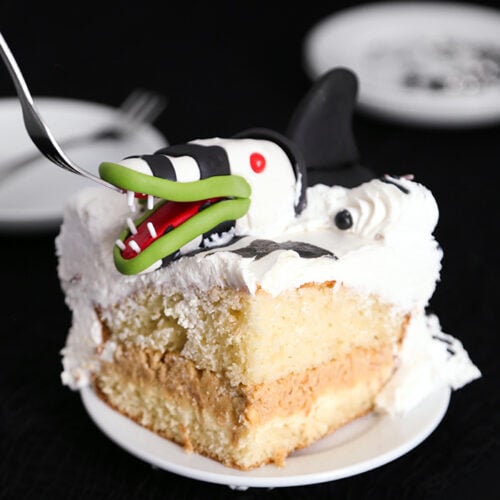 I love this so much! You really captured the spirit of the characters. I don't remember the Zagnut reference from the movie – maybe I overlooked it because I didn't know what it was. Peanut butter, coconut, and white chocolate together sounds amazing!

Haha! Thank you! Zagnut is kind of an obscure candy bar these days. The reference is from a very short part of the film where Beetlejuice is trying to lure a house fly into his lair with the candy bar so he can eat it (eat the FLY!). Blechk!!!

Fabulous cake and so appropriate! I loved Beetlejuice too and I think I will have to try this, or at least the filling. Sounds delicious!

I love this cake!! To late for me to fix this Halloween but, there is next year I will try to make it. Love the colors and the silhouette design is just perfect. I do have a question for your buttercream how did you get regular American Buttercream that white with just butter? I have seen people use shortening but I don't like the taste of that, I usually make SMB. But would love an easy to make buttercream that is pure white. Thanks for the post love it.

This might sound really strange, but I use butter made from corn-fed cows which is less yellow than grass-fed. Then I whip it with the whisk attachment in a standing mixer for about 7-10 minutes, until it's almost white in color. I do this before adding the confectioners' sugar. It will still have a light cream cast, but the end result is nearly white buttercream. You can usually count on store brand butters (such as Kroger, Publix, etc) to be light in color.

Thank you Heather for the quick response I will look for less yellow butter in the grocery store love this idea and recipe along with all your recipes.

I adore this cake and plan on making it for Halloween this year. Can you share with me how you achieved the black boarder around the cake board? The way you have decorated/styled this cake is downright perfect!