This cake came about after a friend asked me to make a Taco Bell cake for her husband’s birthday. I thought that was just the cutest idea ever, so I set out to find examples of what a Taco Bell cake might look like. After an online search – wow! Turns out Taco Bell cakes are totally a thing! I gathered some ideas and came up with something I felt was appropriate to feed a crowd of 50, which was a two-tier cake with two small candy taco supremes on top and the bell part of the Taco Bell logo.

After the birthday party was over and the cake was long gone, I immediately wanted to do a Taco Cake 2.0. I had figured out how to make a pretty near likeness to taco shells using white chocolate and oreo cookie crumbs with the previous cake, so there was only one thing left to do. Make One Big Taco Cake (OBTC, as I’ve been calling it). This cake recipe has several steps but most of them are relatively quick to manage. It’s a fun project and not at all difficult!

One element I used in both cakes was Mexican chocolate ganache. It was a filling for the birthday cake and for OBTC I used it as cake frosting. It’s so delicious and just adds to the fun theme. You could use any combination of chocolate you like, but my combination of Taza guajillo chili, cinnamon, and Lindt chili chocolates was crazy delicious! One note if you use Taza discs – this is stone ground chocolate (mostly used as a tasting chocolate) so the ganache may look grainy – this is normal so don’t fret!

The white chocolate taco shell is quite flexible after a few minutes at room temperature.

Candy ‘shredded cheese’ (ha!). This is made with orange and yellow meltable candy disks.

Dressing the taco! Aside from the shell, I think the cheese is my favorite part!

The cake portion is fashioned from a single 8-inch dark chocolate layer that is trimmed to fit inside the white chocolate shell. This cake will feed about 8 people, so if you’re expecting a larger crowd you may want to double the recipe and make a couple of OBTC‘s! 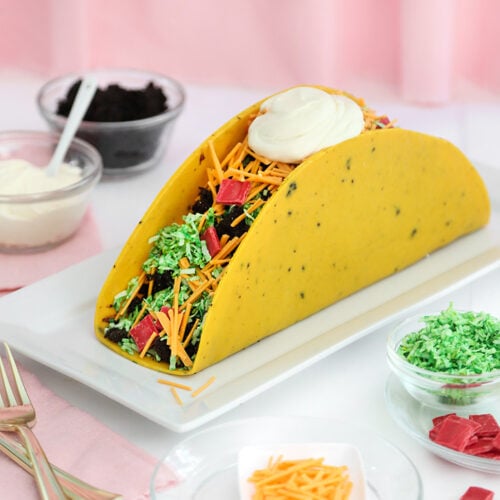 Heather Baird
Make the ganache first because it needs to firm in the refrigerator before being used as frosting for the cake. You can use any combination of chili-flavored or Mexican stone-ground chocolate you like. I listed the amounts, flavors and brands that I used in this OBTC.
5 from 3 votes
Print Recipe Pin Recipe
Prep Time 1 hr
Cook Time 30 mins
1 hour chill time 1 hr
Total Time 2 hrs 30 mins
Course Dessert
Cuisine American
Servings 8

Keyword chocolate cake, mexican chocolate, white chocolate ganache
Tried this recipe?Let us know how it was!

P.S. Here’s the birthday cake that inspired OBTC, if anyone is interested!

Ok, this is so awesome! I have a taco loving 7 year old that I'm hoping will want this for her next birthday!

That would be so perfect! It's not too hard to make, I promise!

This is by far the best taco cake I have seen! Thank you so much for the tutorial! My step son LOVES tacos and I already had the idea to make him a taco cake. Now you have made it sooo much easier! Thanks!!

Question. In the instructions you say to add shortening, but then ingredients list oil. Which should be used? Also, if I want to use just a dark chocolate ganache would I just use equal amounts to add up to the amount of chili chocolate used? I am definitely making this for my daughter's upcoming 10th bday. Thanks for setting the theme!!!

Hi Bryn! I mean vegetable oil. Shortening is a typo! Thanks for the heads up, I'll be sure to fix it. And yes absolutely! You can add equal amounts of dark chocolate for the chili chocolate.

Woow! 🙂 What a great cake for taco lovers! Love the "cheese" there!

Ahhhh Heather as usual you are AMAZING! I love the clean, artful design of your OBTC… it is HILARIOUS and looks so great!! Love the original one you were inspired by, too. That dollop of heaven cream is so brilliant.

You are so fun, your photos are awesome, your recipes are so clear and your videos are delightful. Thank you again so much!

That is adorable. My kids love tacos, and always make jokes about Taco Tuesday if that's the day I happen to serve them. I may have to try one of these to catch them off guard.

The cake looks gorgeous and delicious. Thanks for share!!

Wow, this looks so awesome ahahah I just love it! Hope when I make mine it'll look just as awesome!

Taco cake? Lol! You're always amazing me. I simply love it! Thank you for sharing the details with us!!

I made this cake for myself for my 42nd birthday! It was delicious and SO fun to make! I now want to make taco cakes for every occasion. 🙂 Thanks for the inspiration and how-to!

i was going to try and make this cake as small individual cakes for my daughter's birthday party. wish me luck!

how far in advance is it ok to make the "taco shells" if i keep them in the fridge?

The shells can be made a couple of days in advance. I recommend keeping them at room temperature in a zip-top bag with the air removed. They can become brittle in the refrigerator, and if you try to bend them when they are cold they'll break at the bend. Good luck good luck good luck! You'll do great!

Hi Heather, I wish I would have had as much success as some of the other folks did with their "taco shells." I followed the directions carefully and watched your video several times. However, my shell never got hard enough to mold and wouldn't stick to the cake. When I folded the sides up, it slumped over. I tried several times. I am disappointed and wonder what tips you have that could have made this a success. I have made cakes for years and this chocolate shell was a bit out of my comfort zone but still….. 🙁 All I… Read more »

Hi Nicole! Well darn! I'm sorry to hear your taco shell wouldn't stand at attention. I wonder if it had something to do with the butter fat content in the white chocolate you used. Certain brands of white chocolate are super high in fat – up to 55%! I feel maybe this could be the culprit for a too lax taco shell, but I can't say for sure. If you decide to make a second attempt, look for chocolate with around 30% butter fat, or use white candy melts in place of the white chocolate. Thanks for trying the recipe,… Read more »

Any suggestions for another brand of white chocolate? I am not finding butterfat info on labels and having failed with Ghirardelli chips (bad idea, they were on sale though!) I just want to know if there is a name brand I may easily be able to find in the store (I am in Washington DC so it shouldn't be too hard). Thanks!

I make a lot of cakes and a lot of tacos. I’ve never made a taco cake until this past weekend. I’m so glad i found your fabulous cake! I followed the directions for the shell and it came out perfect! Thank you so much for sharing.

I just made this for my daughter's "Dragons Love Tacos" birthday party and it was awesome. The shell was a little slumpy, but I stuck a toothpick in it and it stayed together. I followed the directions exactly – even bought the taza chocolate (that ganache was amazing)! The only change I made was using wilton candy melts instead of white chocolate for the shell, which worked well. Also, the candy melts in the plastic bag didn't work for me – my bag broke! Next time I'd just put it in a pastry bag and pipe it. But overall, thanks… Read more »

Also had slumping issues with the shell. It would stay rigid for s bit but softens quickly and droops. Was also hard to cut, almost gummy. I used white chocolate melts so I am guessing that was the variable that caused issues?

Where do you find that brand of chocolate you used

Hi Neva,
It’s available at many well-stocked grocery stores in the US, or you can find it online right here: https://www.tazachocolate.com/collections

That’s truly original! My husband would love this!

I made this cake for Cinco De Mayo. Came out great. I couldn’t find the Taza chocolate locally and it was too late to order online. I used all chili chocolate from Lidl for the ganache.

I made this cake & it’s great but the shell wouldn’t really stay up! Any advice?!

Oh no! I’d say stick some more buttercream to the sides of the cake between the shell and cake. Then refrigerate it to set. I hope this helps!

How far ahead can this cake be made and covered in the fridge?

Hi Tonya! You can make it a couple of days ahead. It should keep well in the refrigerator.