I’m so excited to tell you about this cake because it tastes like a tropical vacation. It’s a nice indulgence, especially if you’re like me and you’re not sure a beach getaway is going to happen this summer (I’m still crossing my fingers!). Blue Hawaiian cocktails are fruity and delicious with cream of coconut, pineapple juice, rum and citrusy blue curacao. It’s probably my favorite summertime cocktail ever, and it translates so well to cake!

I baked this cake in three 6-inch pans, but the recipe could be made in two standard 8-inch pans. If you’re an avid baker and ever get the chance to pick up some 6-inch pans, I highly recommend doing so! Six inch pans make such a beautiful little cake – small but tall, an eye-catching centerpiece.

The cake begins with moist and slightly dense coconut cake layers. Cream of coconut (also labeled Creme de Coconut) is the magic ingredient that really makes the cake’s texture special. You can usually find it in the cocktail supplies section at the grocery store. It’s thick, syrupy and sweet like dessert, so coconut milk is not a suitable substitution.

The filling is simple – pineapple chunks that have been crushed and patted dry with paper towels. You can use fresh pineapple or canned, but if you use canned I recommend purchasing unsweet pineapple in pineapple juice (instead of heavy syrup). The acidity of naturally sweet pineapple is best in this cake.

A Blue Hawaiian cocktail is never complete without a fresh pineapple slice and maraschino cherry on the side, so I loaded the top of this cake with both. The only regret I have is the lack of a cute paper umbrella – oh well. Next time for sure!

I hope everyone is having a great summer and has the chance to indulge in a little fun – and cake! 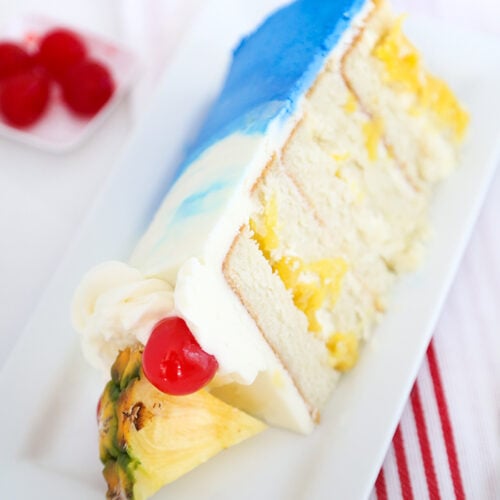 This is so beautiful! I love this idea of a tropical cake.

We Are Not Martha

Ahh this is stunning! So perfect for a summer party!!

This cake is gorgeous! I love blue Hawaiian cocktails, maybe our Halloween theme this year could be Hawaiian so I can make this gorgeous cake!

I love the blue in this cake! It's so vibrant and gorgeous! Love it!

Definitely looks delicious! I'm sure I can't make this without messing up, but maybe with a little help from a more experienced person (cof cof–my mom) I can make it work x)

I love this cake for summertime, mmmmmmm!

How much half and half or heavy cream do you use?

Add one tablespoon at a time until the mixture comes to spreading consistency.

This cake is delicious! The cream of coconut in the cake makes it smell like tropical heaven and taste just as good. I made it for my husband’s birthday several years ago and he just requested it again. It’s ready and waiting in the kitchen. I’m looking forward to digging in!

Hi Claire!
So glad to hear you’ve enjoyed this cake! Thanks for sharing and taking the time to review the recipe. A very happy birthday to your husband. 🙂