There’s nothing happier than a rainbow cake! Cake layer in rainbow hues are hidden behind a wall of rainbow licorice twists and Swiss meringue buttercream.

Here’s a dose of happy color for your Friday! I love rainbow cakes, so I was surprised to realize that I’d never made a rainbow layer cake for this blog. I’ve made Rainbow Frosted Cupcakes and Lemony Rainbow Checkerboard Cake, but somehow the original version has eluded my recipe index.

Hopefully I’ve made up for the exclusion (in spades!) with this cake’s interior and exterior rainbow colors.

The rainbow exterior is a wall o’ Twizzler Twists in rainbow colors. You can find these in the candy aisle at the grocery store, or you can order the required 2 packages here. You can’t get much simpler as far as cake decorating goes. Just line the twists up in rainbow color order at an angle, or you can place them vertically for easier slicing. I served this cake by placing my knife between two Twizzler twists and cutting the cake at an angle. It made for some very interesting slices!

The top edge of the cake is lined with gummy bears in rainbow colors. Now. I’m a Haribo fan from waaay back, but I also love the Albanese brand. I keep a 5 pound bag of the latter on hand because I love how soft they are and also because there’s probably something psychiatrically wrong with me. But, whatever. I love gummies, okay?!

I picked up the ultra-cute lollipop candles at the grocery store. I can’t find them for purchase online, but they are made by Betty Crocker. If you can’t locate the candles, then I think this cake would also look cute decorated with the real thing: swirly candy lollipops standing upright in the middle of the cake.

This cake’s flavor reminds me of white cake; a simple but rich bakery-made birthday cake when frosted with Swiss meringue buttercream.

Be sure to pick up an extra two dozen eggs (!) while you’re grocery shopping. The rainbow cake requires 10 egg whites, and the Swiss meringue buttercream requires 12 egg whites. 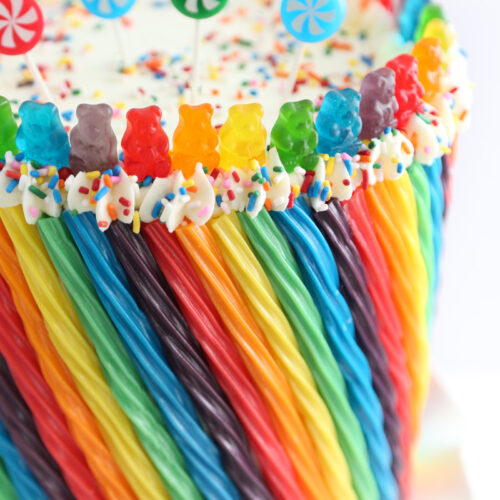 I feel happier from just looking at this post! Perfect for any kid (or adult who is a kid at heart!) beautiful

This is so pretty!
Kari
http://www.sweetteasweetie.com

How is it that the slice pictured is such a perfect cake slice? I would think cutting on a angle in between twizzlers would distort the final outcome? Please advise cuz we SO want to make this one!!!

How is it that the slice is such a perfectly shaped cake slice? I would think cutting at an angle in between the twizzlers would distort the look of the slice? Please advise since we SO want to make this gorgeous cake!!!

Angling the knife between the twists doesn't really distort the cake slices much. You may have to remove one twizzler on one side of the slice in order to get a picture-perfect slice with a pointed end. If you're concerned at all you may consider making a small practice cake or placing the twists upright.

Never thought of decorating with twizzlers. Placing it diagonally makes for a double great idea. This should be in a list of "Easy Cake Decorating Ideas". Lovely!

its a nice read and pinned it to my pinterest account! looking forward as a reference since i will be opening a small business @ home. (pre ordered cakes) set up a online account for my clients.

Im been shopping around for bakeware, so far, shorisuperstore gave me classical deal set that gave me a nod, esp theyre cheaper compared to all other brands..

THIS IS SO CUTE!!!!! I am also a die hard Haribo fan. Cola bottles, gummy bears and twin cherries for life!

This cake is amazing – shared and pinned for inspiration later – the kiddos minds would be blown if this was their birthday cake! WOW!

This is so adorable! I'm planning on a rainbow cake for my daughter's second birthday, and there's so many cute ones out there it's hard to choose. 🙂

WAHHHH this is so cute!! No one else does colour like you, sweet lady!! This is a show stopper to the MAX! (love how many eggs it uses too, hehe!)

how cute, i love it! it looks like the sort of thing youd find in a storybook. you can find similar candles online at party city! http://www.partycity.com/product/lollipop+toothpick+birthday+candles+5ct.do?navSet=271763

Hi Heather! I'm making this cake this weekend for my daughter's third birthday party (she is SUCH a rainbow girl!), and it's going to be outside, albeit in the morning. Now, I live in Texas, so it will be warm (not hot, but you know). Will the swiss meringue do okay, or should I sub in another kind of frosting?
Thanks! I've LOVED making your cakes! I made the chocolate chip cookies & milk cake for my son, and the awesome sprinkles-covered cake for my own!

Beautiful looking cake! So, at 1.5" per layer with 6 layers, that means the cake it a little over 9" tall. My Twizzlers are about 8" long so I'm wondering if you found extra long Twizzlers somewhere? Thanks so much.