I’ve you’re a true coconut lover, this is your cupcake!

I first made coconut ice candy about eight years ago when I was just beginning to blog. It’s a dense coconut confection with pink and white layers. The candy is pressed into a baking dish, and then it’s chilled and cut into squares, much like fudge. I’ve always considered it to be a pretty candy, and recently I had the idea to use it for a garnish atop coconut cupcakes.

These cupcakes have three coconut elements: filling, frosting and candy topping. My favorite of the three may be the marshmallow coconut filling. It’s a combination of prepared marshmallow cream and cream of coconut – so easy to make and so good!

The recipe for this coconut ice candy is no-bake! The original recipe I tried so many years ago required boiling sugar syrup to soft-ball stage (240F), but this version is so much easier. All you have to do is mix the ingredients together in a bowl.

This recipe yields exactly 12 cupcakes if you measure the batter by level 1/4 cups. You’ll have plenty of coconut ice candy left over after you top your cupcakes, so you may want to consider packaging the squares in cellophane for an Easter basket goodie. 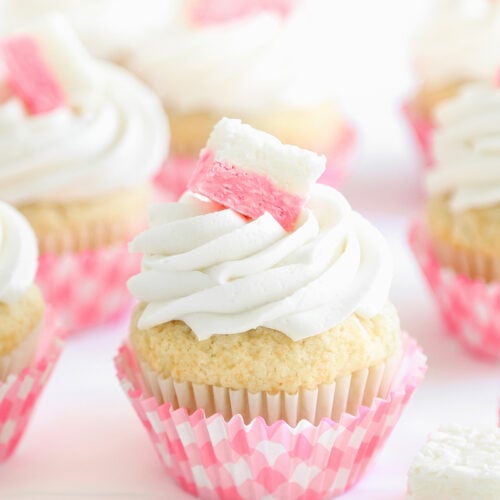 Heather Baird
This recipe uses cream of coconut, which is not the same as coconut milk. You can find this sweet cream in the drink mixers section at the grocery store. The coconut cream may separate in the can, so be sure to stir it well before using it in this recipe. It's okay if it's a little lumpy when you add it to the recipe.I use clear vanilla extract in all of the elements in this recipe. It yields a pristine white frosting and white candy coconut layer. If you don’t have clear vanilla extract then regular extract may be used instead.
No ratings yet
Print Recipe Pin Recipe
Prep Time 35 mins
Cook Time 20 mins
2 hours chill time 2 hrs
Total Time 2 hrs 55 mins
Course Dessert
Cuisine American
Servings 12

Keyword coconut ice, cream of coconut, yellow cupcakes
Tried this recipe?Let us know how it was!

So beautiful and springy! Pink and white make for the cutest cupcakes!

Do you measure the powdered sugar BEFORE or AFTER sifting it?
Help!

Hi! In the coconut candy portion the sugar is sifted and then measured. In the frosting portion it is measured and then sifted. Does that make sense?

Oh it looks so good..

So super cute! Absolutely love these!

Absolutely love these! Can we store the coconut ice candy in room temperature after it's cut? or does it need to be refrigerated?

help! I tried to make these cupcakes this weekend, followed everything totally to the letter, but the cupcakes puffed up and and then totally collapsed. Not just a little, the cupcakes looked like cups. The only thing that i can think of is that i over-beat the butter, introduced too much air into the batter. Do you have an ideas?

Hi! Sorry that happened to you! There are a few reasons why this could happen. If your pan is too close to the top element, then it can cause a rapid rise and then a total collapse much like souffles. Middle rack in the oven is best. Over-mixing could also contribute. If you try again, I'd stir the batter together with a spatula. It takes longer but it will ensure that you don't overmix your batter.

Thank you for trying the recipe. I'm so sorry you had trouble!

We made two batches YUMMMM!!!!

Hi! Can this recipe be made into a cake?? Looks so good, but I would love to make a cake version of this for an upcoming birthday 🙂

Can any part of this recipe be made ahead and frozen?