Easter is on the horizon, and I’ve been celebrating early by eating chocolate bunnies and buying jellybeans in bulk. I think spring-themed candy just the prettiest. I’m tempted to string a few speckled malted milk eggs on ribbon and wear them as jewelry.

This piñata is my way of celebrating the vibrant candy of the season. In fact, it’s a giant piece of candy itself! I made it using vanilla royal icing and edible wafer paper. It’s pretty easy to make (albeit a tad messy) and a fun interactive centerpiece.

There is much amusement to be had with cracking a giant egg. You can tap one side on a counter top to make a weak spot in the shell, and then pull off (and eat!) the pieces that break away (cue the Willy Wonka music Pure Imagination!). I would advise cracking the egg on a table top surface instead of a corner, or else you may end up redecorating your floor Jelly Belly style. If you’d like a neater opening, then you can cut out a hole in the shell with a serrated knife.

I put together a picture tutorial of the egg-creation process, so you can follow along if you are inspired to make your own.

You’ll need sheets of wafer paper cut into strips and prepared stiff peak royal icing. I used 12-inch balloons to make an egg shape, and only inflated them a little over halfway full. The balloons are coated with vegetable shortening, and the excess is blotted away with a paper towel. A small pot or cake pan makes a good balloon holder and will make it easier to reposition the ‘egg’ as you work. Here’s the gist of the ‘paper mâché’ technique: Cover a portion of the balloon in royal icing and add a wafer paper strip on top; frost the paper. Continue working your way around the balloon with icing and wafer paper strips.

The bottom of the balloon needs to be reinforced since the candy sits there when the egg is filled. I did this by cutting three wafer paper circles and fringing the edges. These pieces sit on the bottom of the balloon and the fringe is smoothed down onto the royal icing. The balloon doesn’t have to look perfect, so don’t worry about making it beautiful at this stage. The surface will be covered with more wafer paper later. Let the covered balloon dry overnight. The next morning, make sure the outside is firm by tapping it with a finger all around the surface. If it’s firm and hollow-sounding, the balloon can be deflated and pulled out of the egg. The inside of the egg will still be a little moist, so let it dry for two or three more hours before decorating and filling. Using a pair of kitchen dedicated scissors, trim the hole at the top of the egg large enough to receive candy eggs and jellybeans.

Cut more wafer paper into strips, and then fringe the strips. Using corn syrup and an artists’ brush, paint a line of syrup at the top edge of a fringe piece and adhere it to the egg. Repeat until the entire egg is covered. I used a few circles made of fondant to decorate my egg. They were glued on with corn syrup. When you’re all finished, fill the egg with candy! Remember the wafer paper circle that we fringed to reinforce the bottom of the egg? You’ll make two more of those to close the top of the egg. Just paint a little corn syrup around the top edge of the hole and stick them on.

It’s been fun to have this guy sitting on our kitchen island, where we can nibble candy as we please. With its fringed decor, it struck me as part piñata and part furry Muppet. It has a personality of its own – so much that it startled me when I went downstairs for a midnight glass of water!

I know ‘Edible Paper Mâché‘ doesn’t sound appetizing, but I tell ya – It’s not bad! And I have a feeling that kids will LOVE IT. I’m such a huge nerd for crafty sweets. If you have a heart for them too, then you’ll have lots of fun making this piñata Easter egg. 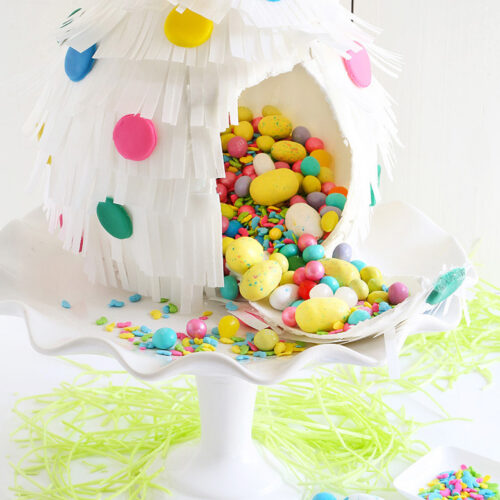 Heather Baird
This totally edible paper mache egg will hold lots of Easter candy – and after breaking it you can eat it, too! It's made of royal icing and tastes like candy.
No ratings yet
Print Recipe Pin Recipe
Prep Time 2 hrs
8 hours or overnight drying time 8 hrs
Total Time 10 hrs
Course Dessert
Cuisine American
Servings 24

People with allergies to latex should choose a different project to make for Easter, unless a suitable replacement for the latex balloon can be found. I’ve seen non-latex vinyl balloons online but have no experience with using them for edible piñata-making.
Keyword latex balloon, royal icing, wafer paper
Tried this recipe?Let us know how it was!

Rhooooo! how amazing is that! Everyone will be in awe! Bravo Heather! Incredible creativity as always!

This is so cute!

This is such a fun!

LOVE IT. Freeeeking Aah-mazing. Plan on using this for gift baskets. Thanks for sharing.

Hehe! Heather you are such a clever sugary genius. Amazing as always. (my kid would freak out over this for sure!!) XO

You, Heather, have taken your dessert ingenuity to another level! This is amazing! x

Edible paper mache is such a brilliant idea! I'm so going to have to try this. It's the cutest!

LOVE your jewelry idea. I would wear candy any day! This is seriously gorgeous. LOVE it!

Wow, this is one of the most clever edible crafts I have ever seen. It's truly amazing!

I will be showing my mom this post…so cool..edible paper mache…!!!

You're always so creative!

ooh, that IS adorable!

Another favorite blogger of mine made some jewelry out of Halloween candy a few years back; you could do the same with jelly beans or spring-colored candy corn =) http://www.epbot.com/2010/10/crafty-candy-bracelet.html

Wowza!!! You are such a sugar wizard. This is genius!!

Are. You. Kidding. Me?! This is fantatic! YOU are Willy Wonka!