I’ve had my serious hat on for a couple of weeks now, mostly due to  deadlines and commitments. I believe that’s partly how these rainbow meringue cones came about. I just couldn’t take one more day with a furrowed brow. And do you know that rainbow treats are the opposite of a furrowed brow? They are.

Another reason why these rainbow puffs made it onto my baking sheet is because ThinkGeek sent me a Sprinkles the Unicorn Sprinkle Shaker. It’s just the cutest thing. I’ve been waiting for the right  inspiration to use it in a blog post, and I felt something rainbow-themed was in order. This morning while drinking coffee and cloud gazing (I do that sometimes when the clouds are extra puffy), I saw a vaguely horse-shaped cloud illuminated by light, and felt it was a sign to use my unicorn shaker today.

Do you see it too? Practically a unicorn without a horn, right?

Or maybe a dog. A goat with an abnormally fluffy tail? (smile)

Because the folks at ThinkGeek are so awesome, they sent along another Sprinkles the Unicorn shaker for a giveaway, and I’m opening the contest worldwide. You can enter with the Rafflecopter widget below. Email subscribers, please visit the blog post to enter.

I’d never made rainbow meringues before, but it’s really easy. Just fit a piping bag with a decorator tip, and then paint long stripes of gel food color on the inside of the piping bag using an artist’s brush. Space the painted stripes out if you’d like some white meringue showing, or if you want a solid rainbow, place the stripes very close together.

Here’s my sprinkle shaker in action! I tried all kinds of sprinkles in the shaker, and found that rainbow nonpareils work best. Sprinkle the piped meringues just before you put them in the oven. The sprinkles won’t melt away because the meringues are baked at a very low temperature.

I decided to make the meringues into cones because the colorful swirls reminded me so much of these little treats I ate as a kid. They were always stale, but I loved them anyway. I filled the cones with chocolate ganache, which makes the finished dessert taste like exactly four bites of rich chocolate tart. The sugar cone makes a great “crust”.

Even though these ice cream cones are the non-melting sort, I think they’d be a cute addition to an ice cream social. It’s good to have something a little different and unexpected. Hope everyone is having a GREAT summer! 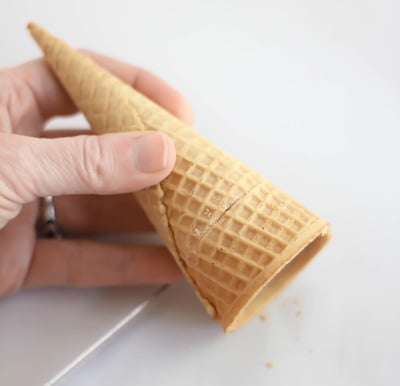 If using standard size sugar cones, trim about two inches from the top by scoring the cone with a serrated knife. Break the top at the scored mark and save the excess for later use (on a bowl of ice cream!).

The cones will need to stand upright to be filled. If you don’t have a specialty ice cream cone holder (who does?!) then cut several X’s into the top of the sugar cone boxes with a serrated knife. Place the cones upright into the X perforations in the box. (See pictures in the blog post for clarification.)

In a large microwave-safe bowl, combine the chocolate pieces and heavy cream. If any chocolate  pieces are poking above the surface of the cream, then pat them down with the back of a spoon. Heat at 30 second intervals or until the mixture can be whisked smooth. Allow the ganache to cool at room temperature until slightly warm but still pourable, about 30 minutes. Pour the ganache into the upright standing cones. Transfer the cones to the freezer until set. Meanwhile, prepare the meringues.

Whip the meringues in a standing mixer until frothy and add the cream of tartar. Beat on high until soft peaks form and gradually add the sugar. Beat on high speed until the meringue is thick and glossy, and will hold a standing peak with the beater is lifted from the bowl. Cover two baking sheets with parchment paper and preheat the oven to 170F.

Using an artist’s brush, paint thick 1/2-inch stripes of each gel food color inside the piping bag, cleaning the brush between colors. If you want a true rainbow effect paint the colors in this order once around the inside of the piping bag: red, orange, yellow, green, blue, violet. Place the meringue inside the piping bag. Don’t worry if the colors smudge – it’ll all be okay in the end. Pipe the first one or two meringues back into the bowl – these will have no rainbow stripe, and the rainbow colors will intensify as you pipe the meringue. Pipe each meringue in two swirls, one on top of the other, to give it the appearance of soft serve ice cream. Bake the meringues for 40 minutes, then turn the pan halfway and bake for another 40 minutes. Turn off the oven and let the pans cool. You can leave them overnight if desired.

Dip the set cones into the melted chocolate and then dip the edges in the multicolor nonpareils. Up to one hour before serving, dip the bottoms of the meringues in a little chocolate and set them on top of the chocolate-dipped cones. Allow them to stand until the meringue is stable. Serve immediately.

I’d love for my puppy-loving pals to check out my Ice Pops for Pups post on the Etsy blog. Biscuit was on

Check out a recipe round up for summer cookout fare on TripAdvisor’s FlipKey blog (you’ll see a familiar watermelon cake there!).

I put sprinkles on everything. I go overboard sometimes!

When I was a child we had sprinkles on mini cupcakes and lightly buttered bread. These were called fairy cakes and fairy bread. My daughter was into fairies when she was little and we made these all the time. I make them now for the grandchildren and they love them just as much.

We sprinkle everything! Yogurt, pancakes, the rims of our milk glass – you name it, we sprinkle! Call us fans if you like 😉

Extremely pretty! And your dog is irresistibly cute.

Ooh I know just the group of young ladies who would love these beautiful cones! I'll surprise em at their next meeting with them!

That sprinkle shaker is adorable.

Sprinkles are fun for everyone, especially cupcakes and cake batters.

I like rainbow sprinkles in my blueberry pancakes. Funfetti Blueblerry Pancakes!!!

Love those! I shake sprinkles on cookies, cupcakes, blondies, and ice cream.

Amazing! Love your site so much! x

Cute cones! I'm a sucker for rainbows! I love sprinkles on my ice cream!

I especially enjoy to put sprinkles on ice cream and cupcakes 🙂

I shake sprinkles on everything I can, but mostly cupcakes

I have to show these to my friend – they would be great for pride events! And you can never have too many sprinkles 🙂

I will literally put sprinkles on anything. I even make my own flavored ones!

Love the rainbow colors and the sprinkles. My granddaughters would love these! 🙂

I put sprinkles on pretty much everything – sometimes even cinnamon rolls!

What don't you sprinkle sprinkles on? I put a few sprinkles in my protein healthy smoothie to pretend like I'm drinking a milkshake.

cupcakes and doughnuts and cake pops !!! love them sprinkles!!

This is so cool!! I absolutely love this idea!

Donuts, for sure! And cupcakes too.

These are amazing! Sprinkles on everything, especially ice cream.

I am SO making these! Thanks for all your inspiration!!

That cloud looks like a My Little Pony. I put sprinkles on cupcakes, sweet pretzels, cookies, ice cream, fruit pizzas pretty much any sweet treat that needs a little color to "happy" it up 🙂

You have the coolest goodies, love this idea, love the blog.

I sprinkle sprinkles on anything! 🙂

sprinkles go on everything!

Awesome! On cupcakes and cake pops!

What are cupcakes without sprinkles? 🙂 So cupcakes, of course!

My sister sent this to me because she knows that I love rainbows, unicorns, meringue, sprinkles, and just about everything in this post.

My sister sent me this post because I love rainbows, unicorns, sprinkles, meringues and just about everything in this post.