I’ve been finding a lot of inspiration at the candy store lately. There’s something so wonderful about all those bins of colorful candies – jawbreakers, gummybears and jelly beans (and etcetera) – just looking at them makes me feel happy and energetic. (Or maybe I’m just having a sugar rush. It’s hard to say, really.)

My last trip yielded a giant tub of candy necklaces and an extra large package of strawberry-stripe marshmallows called Puffy Poles. The two looked so pretty when I held them together, I felt certain that they would live harmoniously on a candy-inspired cake.

I already had a clear image of what I wanted the cake to look like, so it was just a matter of choosing a cake flavor and putting it all together. The Puffy Poles are really soft and delicious with a pronounced strawberry flavor, and I didn’t want to take away from that. I ended up making a simple white cake swirled with pastel color. The frosting is Swiss meringue buttercream – it had to be. It doesn’t crust like American buttercream frosting, so you can take your time applying the candies and marshmallows to the sides of the cake.

Once the beads are in place, you can pull out the elastic string! Viola!

I used two 6-inch springform pans for the bottom tier and one 4-inch pan for the top tier. It made for a dainty little cake, but with the added marshmallows, you’ll still need a standard 8-9-inch cake stand.

I really love the scratch-made white cake recipe I’ve included below, but there’s no reason you couldn’t give any cake the Marshmallow-Candy Swirl treatment. You can find Puffy Poles marshmallow in every color here, and bulk candy necklaces here. 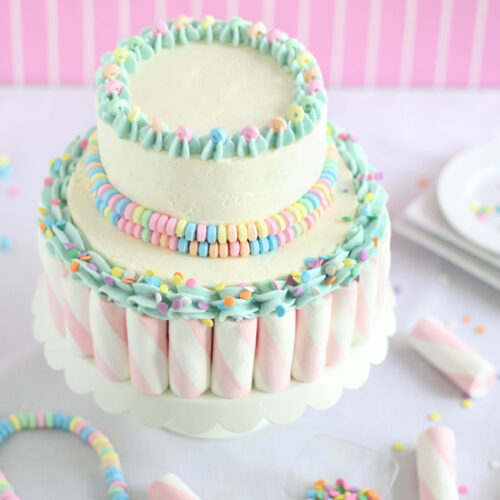 Keyword candy necklaces, puffy poles, swiss meringue buttercream
Tried this recipe?Let us know how it was!

Oh my gosh I just love the pastel colors here! This looks like it would work fabulously for a kid's birthday, with all that candy and delicious-looking frosting! 🙂

Love this!! Prefect for my mother's birthday next week. One question though, is it okay if I halve the recipe? 14 servings is way too much for us.

How fun!!! I love all the colors on this cake! How fun to put the candy necklaces on there. Those were always one of my favorites when I was younger 🙂

This cake looks SOOOO dreamy and whimsical! I love how you combined the candy necklaces and poles – great job Heather!

This cake is so stankin' cute! I love it.

This is too adorable! Candy necklaces on a cake is totally brilliant! And I completely adore the swirly pastel colts of the cake itself—too fun!

Too cute! It looks absolutely adorable! You´re so creative, Heather!

Puffy poles?! Where have these been all my life? My kids would go CRAZY for this cake. Oh, who am I kidding? I'm going crazy. This is amazing. Beautiful cake, as always!
Looks like a trip to the candy store is long overdue here.

So pretty! I love all the candy 🙂

This cake is such a stunner. LOVE!

This is so much fun! The pastels are so perfect on this cake and love the use of marshmallow stick on the out side.

Hi Heather,
Just here to say, that you're amazing!
I'm in love with all your cakes and all your sweets! This is perfect!

Thank you so much for sharing this with other people!

This is such a fun cake. Love the pastel colors. The Puffy Poles are an awesome touch 🙂

Oooohhh, I love it ❤❤❤
Funny, I just used candy necklaces for a cake too:
http://www.saraheinen.de/lovenonpareille/index.php/mein-brauseflummi-herz-tanzt-2/

What a gorgeous cake! You are amazingly talented!

Wow is this amazing or what!? There are so many wonderful things going on here from the swirly inside to the fantastic decor on top. Great job!

That is beautiful. It is whimsical and fun and I love the colors. It reminds me of spring and a little girls dream brought to reality. AWESOME!

This is so pretty! A great cake for a girl's birthday!

This is seriously way too cute. I love the swirl marshmallows on the bottom. I never thought about using them to decorate a cake but why not? The colors are so much fun!

Heather, you make the prettiest cakes. Every time I get that email that you've got a new post, I can't wait to see the photos! This is just so pretty and perfect with Mother's Day around the corner!
Speaking of that,
I have a worldwide giveaway with 2 winners of the CUTEST lil bee salt/pepper shakers to honor Mom and help the effort to save the bees. Please stop by my blog when you have a min.

Suzanne of Simply Suzannes at Home

I've been a long time fan of your beautiful creations.
I smiled so big when I saw this cake . . . I also used marshmallow candy swirls to decorate my daughter's birthday cake a few months ago. Please come by and take a peek! I called mine a 'pink candy cake.'
link here: http://simplysuzannes.blogspot.com/2014/03/a-pink-candy-cake.html
As always, your desserts are stunning.
Have a wonderful weekend,
Suzanne

oh my, this is beautiful and sounds so good,but I do have a question . I only have beaters on my machine. No paddles or whisks. Can this still be made without them?

This cake is such a delight to look at! It makes me happy just looking at it!! If you had a bakery, I bet it`ll be all candy themed!

Can this cake recipe be used for cupcakes?

Hi Heather, I live in New Zealand and we don't have the cake flour you listed in the ingredients and you've noted that it cannot be substituted with homemade cake flour. Is there any other substitute for the flour in your recipe?
Thanks! 🙂

Making this for my daughter's 5th birthday — our first with her home from Uganda with us. So excited to see her face when we cut into it with the pastel colors!

WOW! I mean seriously WOW! I love those cakes very much and I want to make one for my daughter in no time!

This cake is so sweet and precious and fun! Perfect for a unicorn party for my 8 year old. You say, "don't use homemade cake flour". Trouble is, my girl is gluten free. Do you advise against trying to make this with a white, gluten free mix?