Believe me when I say that I may never bake individual cinnamon rolls ever again! My favorite part of a cinnamon roll is the soft, flaky interior, and – guess what. You get more of that when you make one giant cinnamon roll! And you can slice it like cake! I really love how all those beautiful layers separate ever-so-slightly on the plate. It’s irresistible when smothered with orange-nested cream cheese glaze (I swoon!).

Following, you’ll find step-by-step instructions for the skillet cinnamon roll. I hope it will serve as a helpful guide while you make your own!

The entire process is a little messy, but well worth the end result. The muscovado sugar really punches up the brown sugar flavor, so it’s worth seeking out next time you’re at the grocery store.

Just look at that landscape of swirly goodness up there. I can’t wait to try out different versions of this skillet pastry. Maybe I’ll hide some Guittard Fair Trade chocolate between the layers next time. 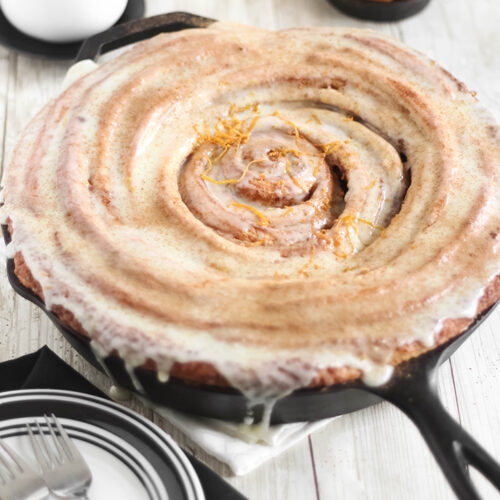 Oh my gosh that cinnamon roll is amazing! I must try that for a luxurious breakfast this weekend. Combination of my two favorite sweet things–cinnamon rolls + cake = pure awesomness. 🙂

What a wonderful giant cinnamon roll!! It looks so delicious too. One of my favorites to have with a good cup of coffee. Blessings dear. Catherine xo

Great recipe, pinned for this weekend's breakfast. The embroidery on the prana scarf looks lovely – thank you!

The cinnamon would be perfect for some savory dishes with farmer's market summer squashes!

That cake looks amazing! I would make cincinatti chili.

I'd love the cinnamon for some apple pie!

I would make homemade rice pudding with Fair Trade cinnamon!

Oh that. Is. Delicious.

I use cinnamon in almost everything. It is my favorite spice to bake with and I would love to win some! Especially so I can get started on whipping up some of these cinnamon rolls!

I would love to win this, fair trade is the best.

I would put it on so. many. sweet potatoes. And in my coffee!

I use cinnamon in both sweet and savory dishes. I will be making this giant cinnamon roll this weekend!

THIS LOOKS SO GOOD! My boyfriend's favorite food is cinnamon rolls, so I definitely want to surprise him with this the next time he has a break from the Navy.

I would try to copy your delicious cinnamon roll recipe! Thanks for sharing and good luck to all!

I'd LOVE to try YOUR recipe…I love cinnamon rolls! I also might make some home made cinnamon ice cream!

I would make churros!

I would use the fair trade cinnamon in some oatmeal cookies…hold the raisins!

I've got to stick with the classic cinnamon rolls…and my mother has a great recipe!

I would make cinnamon roll cake. It is sooo good!

This looks very delicious, i think i might try doing this for mothers day

We'll after reading this the first thing I'd make are these cinnamon rolls they look amazing!

I definitely think good cinnamon needs to be used in cinnamon rolls! Though I'm sure I could find some other uses too.

I would use it in everything possible. I love cinnamon!

I'd make this giant cinnamon roll for sure. But I'd also use it to make my favorite french toast recipe.

Mother of Cinnamon Rolls!!! *see what I did there*

Once again, you continue to amaze me with your creativity! BEAUTIFUL!

This is a perfect breakfast or any meal of the day! I think all that spice has to be used in something speacil like a honey spiced custard tart with pecans. I am planning to make this roll on mother's day it is that good

OMG! I would love to reproduce your cinnamon rolls! I have such a weakness for that sweetness!

With this recipe, I can successfully make my mother something with cinammon in it! I made mojito cake pops based on the recipe on this website and it cams out so perfect!

I would make Chai-Spiced Donut Muffins…. you know, the kind you roll in butter after they are baked then roll in cinnamon-cardamom-ginger? Yummm!

I'd probably be boring and make french toast, but it would be the BEAT french toast there is!

Holy moly that thing is so huge and so awesome! That cinnamon would be awesome in the crumble to a fruit cobbler!

Wow, looks yummy! I'd love to make some cinnamon rolls like these 🙂

This looks fabulous !
Thank you for the pictures to guide with the process.
Rose

Don't even know how to call this thing.. but it looks super delicious!

That looks amazing! I love cinnamon in everything!

"Needs more cinnamon" can be said for just about every baked good, no matter how much I put in.

I would probably make oatmeal and a cup of tea.

I would make these cinnamon rolls!

This looks so delicious, I would love to make this for my mother on mothers day! Such a sweet touch to just the normal brunch! Xo V

I can only say, oh my god! That´s really must tastes delicious! Congratulations from Spain!