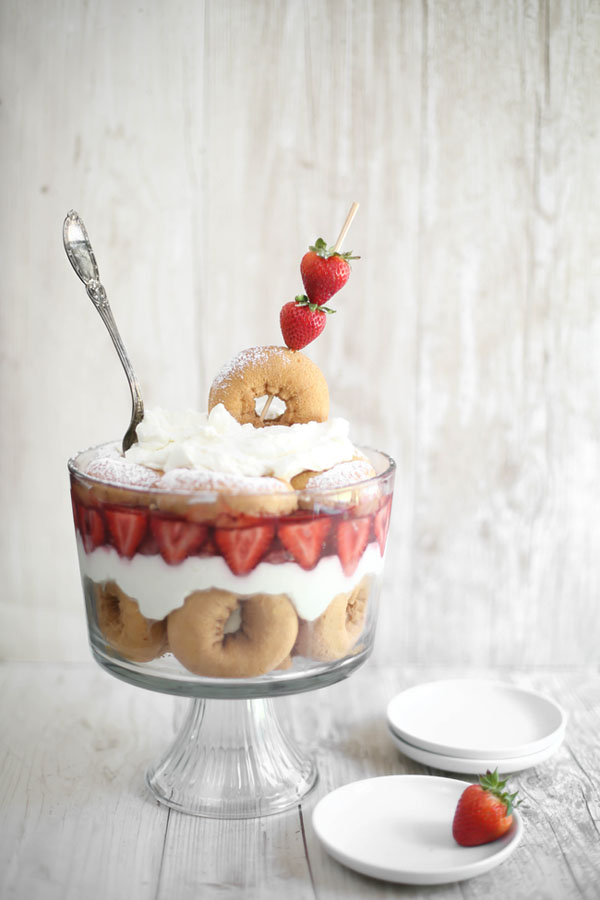 I think we can all agree that a dessert trifle is something you can count on in a pinch.

Don’t have much time to make dessert?

Company’s coming in an hour?

Need a pretty centerpiece for the table?

I came up with this recipe while looking to soothe a craving for strawberry shortcake. It’s easy to make, and there’s no baking involved since you start with your favorite ready-made cake doughnuts. A big bunch of fresh strawberries are sliced up and tossed with melted strawberry preserves before they’re layered on, and fluffy whipped cream cheese is piled high on top. It’s most delicious with in-season berries and definitely something I would take to a summer potluck. 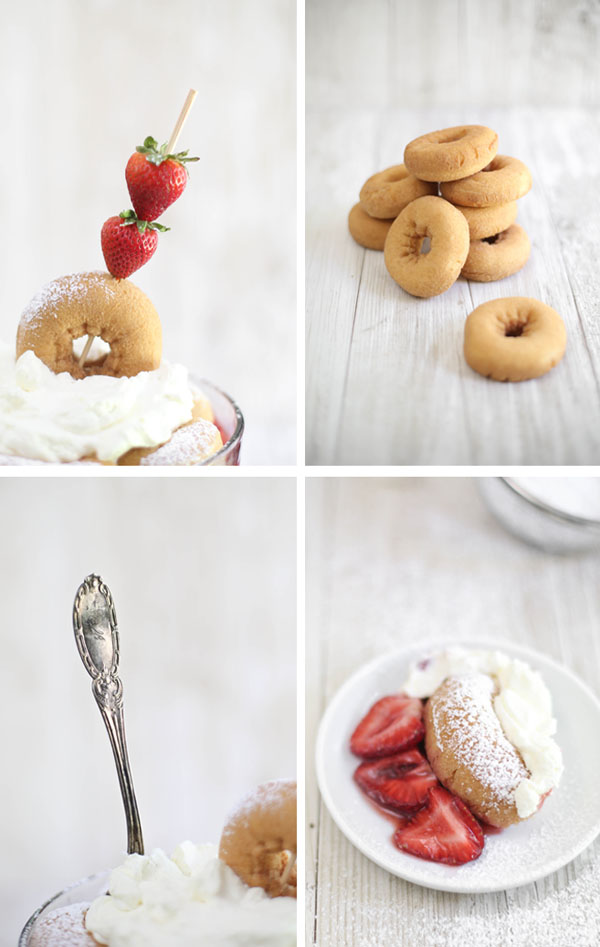 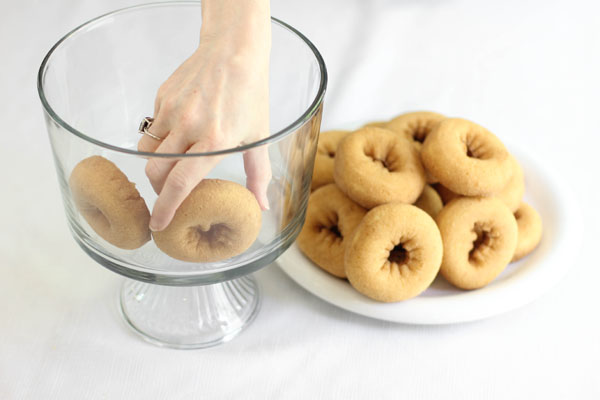 You’ll need an 8-inch trifle bowl, or if you don’t have one, use a  3 quart glass bowl.

Place six whole donuts standing upright around the bottom of the bowl. 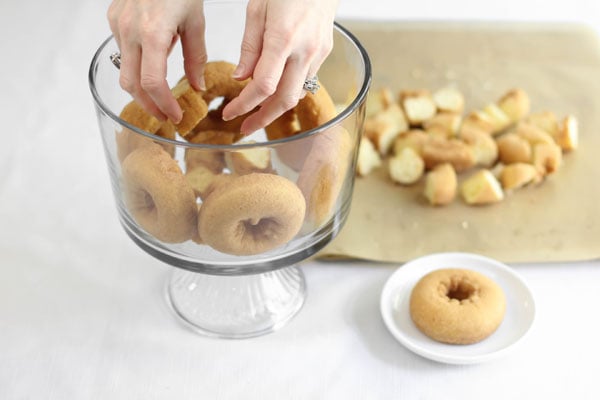 Next, you’ll cube 5 doughnuts and place half of the cubes in the bottom of the dish. 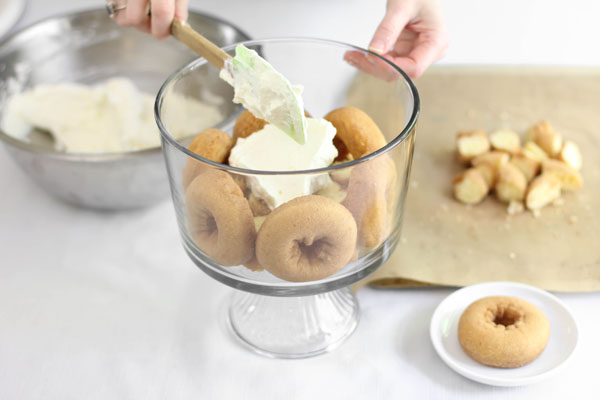 Add in half of the whipped topping. 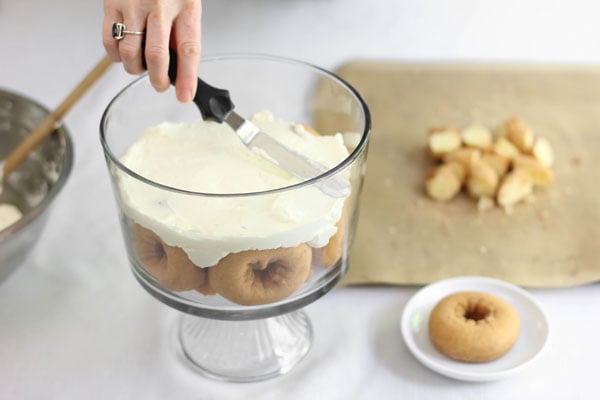 Spread it all the way out to the edges of the bowl with an off-set spatula so there’s a visible white layer. 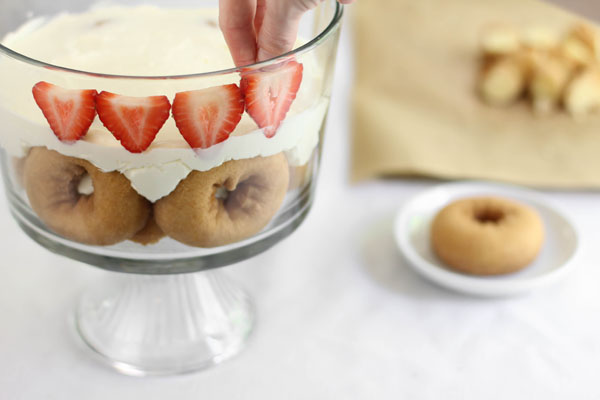 Slice a few strawberries and line the edge of the bowl with them. The juice will allow the slices to naturally stick to the side of the dish. This is purely decorative, so you can skip this step if you wish. 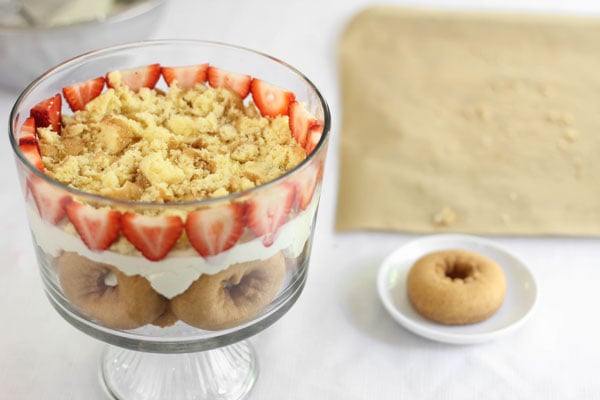 Crumble the remaining doughnut cubes on top of the cream. 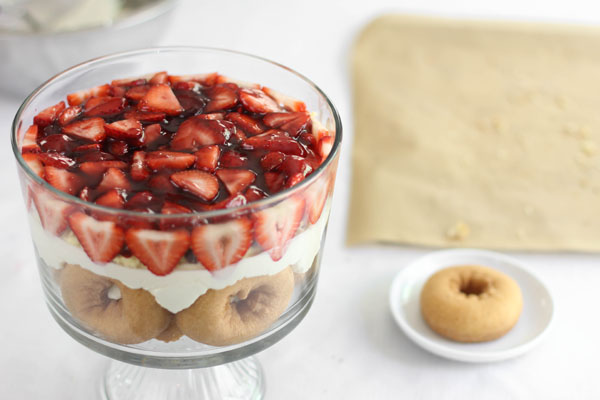 Layer in the slices strawberries that have been tossed in the preserves. 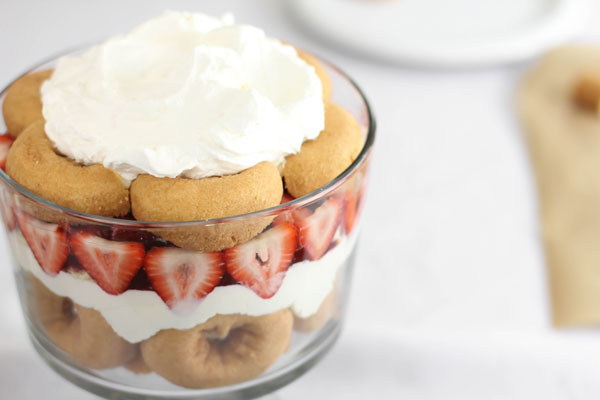 Cut three doughnuts in half and place them around the top edge of the dish. Pour the remaining whipped mixture into the center of the doughnuts. 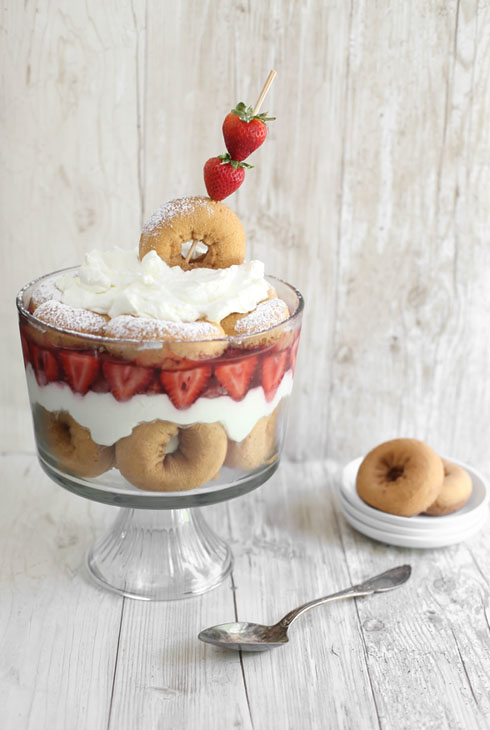 The reserved doughnut and strawberries were threaded on a long skewer and placed in the bowl standing upright, but you could arrange them on top without the skewer if you prefer.

My husband already has plans for a second trifle using his favorite doughnut shop’s sour cream cake doughnuts.  And me? I’m just waiting for fresh peaches to come in season for a peaches-and-cream version.

I hope everyone has a sweet Memorial Day! My utmost gratitude to those who serve. ♥

What a brilliant idea! I cannot wait to make this. Thanks!

Doughnut madness in the best possible way. I Have also experimented with doughnuts and baked into a bread and butter pudding style bake on my blog (because I am living somewhere cold right now). When summer hits I can not wait to try this.

Mmmhhh, that is such a great idea! England meets the US. 🙂

I love this idea! Trifles are so versatile, but I have never thought of using donuts. It opens up a whole new world of possibilities:)

Holy moley! What a neat idea!!

This is an awesome dessert! Now I'm craving donuts and strawberries!

Such a unique way to make strawberry shortcake! Love it!!

This is gorgeous and looks delicious! Perfect for summer! What brand of donuts did you use?

Oh. My. Goodness. I simply love this! What a fantastic, easy idea. Adore Trifles, think I'll make it with berries and some Amaretto splashed over those donuts!

Wow, just wow! This is one amazing looking dessert.

This is an epic trifle. One of the most showstopping and yet simple desserts!

This is so pretty, so crazy, so delicious looking and just so awesome! You are amazing!

I love it! I want it! Give it! Once again Heather, you are awesome. 🙂

ahhhh, I think I will make for my birthday!!
thanks so much for sharing!

Perfect, I think I will make for my birthday ~ this coming weekend!

Oh, this looks like an over the top dessert and the best part is it looks so simple to throw together. Thanks for sharing it Heather.

The donuts are so cute!

Perfection as always. I really feel like I can do this!

What a great idea to use donuts in a trifle!

Wow! What a fabulous idea!

If every wife made this for her hubby, there would be a lot more happy marriages out there!

You're sooo right about trifle – it's my go to dessert when I need something with minimal effort that tastes great and looks gorgeous! I love how you arranged the doughnuts and strawberries!

Wow, the tutorial was much simpler than the dessert first appeared. It's such a showstopper! It does look like you'd need to use cake donuts rather than the airy kind. I usually go to Krispy Kreme, so I'd need to break tradition and go to Dunkin to make this. But it'd be worth it. 😉

Love this recipe! My 5 year old daughter saw it and loved it! So she made it for a church potluck. I did all the slicing but she did everything else. Mixing, layering and making sure "doughnut on a stick" looked just like yours. Thanks so much for a great recipe!

Do you think this would still be good if I made it the night before and served for breakfast? Thx!

I've made this ahead of time and it was perfectly fine the next day!

Hi! Do you think this would still be good if I make it the night before and serve for breakfast? Thx!

Your recipe has been featured here > https://sweetmeetsbakeshop.com/2016/06/17/blueberry-pancake-donut-sandwich-15-more-jazzed-donuts/
Happy Wednesday and keep on desserting!