Hooray for sprinkles! Get the party started with this fun and colorful rainbow sprinkle cake. White sour cream cake layers hold a flurry of funfetti inside.

I’m writing you from my happy place, which is in front of a big slice of cake that is filled with sprinkles inside and out. You probably already know this isn’t my first foray into sprinkle cake territory. In fact, I kind of consider myself a sprinkle cake veteran. Many years ago, on the first blog birthday of Sprinkle Bakes, I made what I often refer to as the original Sprinkle Cake. It’s a great little recipe, and I’ve made it countless times throughout the years. But I love this one just as much! It has the tang of sour cream, and a thick batter that suspends a whole galaxy of rainbow sprinkles inside. It’s like that old Girl Scout song “Make new friends but keep the old. One is silver and the other gold.” That sort of thing. Only with cake.

You may remember the Oreo Cake I recently made. I really enjoyed the flavor and texture of that cake. It did a good job of holding all those cookie pieces inside, and I just knew it would make a really great rainbow sprinkle cake. I’m happy to report that things went just as expected! The pale sour cream batter really shows off all those rainbow sprinkle colors. And the thick, fluffy batter suspends them throughout so they evenly speckle the interior. I’m in love!

Sprinkles: no need for fancy ones.

Regular old ice cream sprinkles (called ‘jimmies’) are perfect for baking in cake layers. They’re often used as an ice cream topping because they won’t melt away easily with moisture. You can find them with the ice cream toppings at your local grocery store, or in the baking section.

White Cake Flavoring is something I use when I want that old school bakery flavor. It gives the cake a rich vanilla flavor with something else that lingers in the background. The flavor reminds me of wedding cake, without as much overt almond flavor. Bakto makes a natural white cake flavor that I use often, and it’s great in this cake. If you don’t have room in your cabinet for another extract, just use pure vanilla extract mixed with just a smidge of almond extract.

This cake is stacked and frosted with white vanilla American buttercream frosting, which is an easy frosting recipe for bakers of every skill set. A classic!

I used my own sprinkle mix for the outside of the cake. It’s a mixture of rainbow sprinkles, mixed with rainbow confetti, rainbow nonpareils, and sugar pearls. My advice is to stir up a combination of shapes and colors that make you happy. However, you can simply use the rainbow jimmies instead of a sprinkle mix.

Pipe swirls of frosting, spaced about 2.5 inches apart, on the top edge of the cake. Then, toss on a few more sprinkles.

I wanted something fun for a cake topper, and just as eye-catching as the allsorts I used on my original sprinkle cake. My local grocery store had ‘gourmet lollipops’ at the checkout counter and I couldn’t resist them! Fun flavors like piña colada, cotton candy, blueberries and cream, blackberry, and candy apple made this cake extra special. I placed them on top of the cake beside swirls of frosting, with their sticks pointing, and meeting at, the center of the cake. If you go this route, then plan to buy a few extra lollipops to serve on the side. Not everyone will get a lollipop with their slice, and it’s best to have enough for every guest.

How cute is the ‘HOORAY’ cake topper? I’ve had it for ages. I just needed the right cake with the right vibe to show off all those glittery letters. This rainbow sprinkle cake is its perfect match! You can find it right here for purchase.

This colorful confection makes a great birthday cake – just add candles! The crumb is sturdy yet moist thanks to the sour cream in the batter. Serve this cake at room temperature, because the flavors and textures will be at their best! 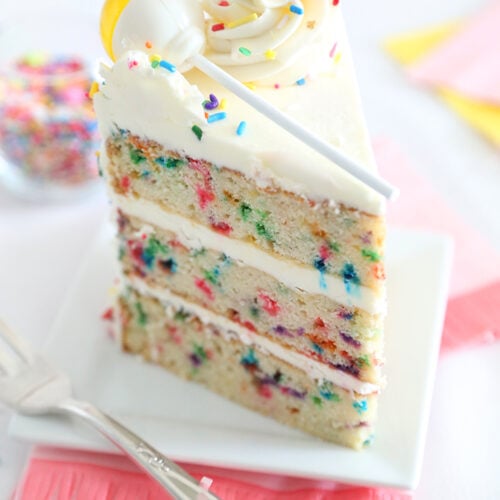 What to expect: Moist cake layers with a light sour cream tang and lots of beautiful rainbow sprinkles inside. White cakes are notorious for drying out quickly, so be sure to keep this cake covered.   Decor: Top the cake with the lollipops just before serving. If you have leftovers, remove the lollipops from the cake before refrigerating. If left on the cake for more than 6 hours, the lollipops will begin to melt with the moisture from the cake. White Cake Flavor: I use Bakto White Cake Flavor (extract) in this cake, which gives it that old school bakery flavor. (See blog post for link.)  It reminds me a little of Princess Cake emulsion, but not as strong, as it is a natural flavoring, and not an artificial product. It has vanilla flavor with small background notes of almond and something a little floral. If you don’t have White Cake Flavor in your cabinet, use 1 teaspoon of vanilla extract and 1/4 teaspoon almond extract for a close approximation. Or, if you’re strictly a vanilla lover, just use vanilla extract.
Keyword american buttercream, rainbow sprinkles, sour cream cake layers, white buttercream, white cake flavor
Tried this recipe?Let us know how it was!

It’s my birthday week and this cake is perfect for a birthday celebration. The recipe listed is for the Oreo cake with chocolate sprinkles buttercream. Is that the correct recipe? Thanks

Hi Sally, thanks for the heads up. I’ve fixed this! Happy Birthday!

Hi,
I love this. It is my great grandaughters first birthday and want cupcakes, can this be made into cupcakes? Her theme is candyland and this is perfect!!

Hi Donna! Yes – this recipe will work well for cupcakes. Your theme sounds so cute!

Hello! This is adorable! I have a sprinkle cake coming up and wondered if it would be easier to roll the frosted cake on a baking pan full of sprinkles? I saw it done somewhere before. Thank you for the recipe!!

Hi Maria! You could absolutely do that. When I use this method, I usually do a crumb coat on the sides, and a full coat on top, then chill until firm. Then I apply a second coat only to the sides and roll the cake in the sprinkles. The top of the cake won’t be tacky, but the sides will be.

Perfect! Thank you! I’ll give it a go!