Dobos torte is such a classic special occasion cake with rich history and flavor. Although the number of layers are often debated (6, 7, 8, 11?) everyone can agree it is both beautiful and delicious.

The cake is named for its creator, József Dobos. The finer details of the original Dobos torte recipe were lost in the Second World War. Perhaps that’s why the recipes are so varied today. This this six layer cake is a fine version of Dobos Torte. It is balanced with light sponge layers and rich chocolate buttercream, and makes a very pretty holiday centerpiece.

These days the sponge for traditional Dobos Torte is made with potato starch and flour. And like most sponge cakes the egg whites are whipped separately from the fatty yolk mixture. No surprises there. But take care not to over whip the egg whites or your cake will be too dry. Look for stiff peaks with a glossy finish. If you have stiff peaks with a dry or matte finish, you’ve gone too far.

Use pasteurized eggs for this buttercream.

The buttercream is wonderfully rich and silky, and that’s due to uncooked egg yolks whipped with the butter, sugar, and chocolate. This method for buttercream was new to me, but it’s not unlike the raw egg yolk custard in My Favorite Tiramisu. It is highly unlikely that microorganisms will grow in such a fatty, sugary frosting, and using yolks from pasteurized eggs is the most preventative measure. So, use them! And save your farm fresh eggs for the sponge layers.

From my research, the addition of yolks aims to replicate the texture of the original buttercream that Mr. Dobos made. Based on the information available, his recipe used cocoa mass (cocoa liquor) and cocoa butter which are not usual staples in the home baker’s kitchen. So this is our more approachable option. If you remain dubious about using raw eggs, see the recipe notes for a quick chocolate buttercream that does not use egg yolks.

The buttercream is not only the filling, but also the covering. I pressed in some sliced almonds while the frosting was still tacky, but you could use pecans, walnuts, or the traditional favorite which is hazelnuts.

You’ll have plenty of frosting left over to pipe large swirls on top of the cake. These are important because they prop up the cake’s eye-catching garnish of hard caramel.

The design creates an almost a windmill effect, and it’s beautiful from a bird’s eye view. The recipe is simply sugar and lemon juice cooked to amber hard caramel stage. It sounds really simple but timing is everything.

How to make the caramel garnish.

First, use the bottom of the same 8″ cake pan you cooked the sponge in to trace an 8″ circle onto parchment paper. Cook the caramel while watching it constantly and be ready to remove it from the heat at a moment’s notice. When the amber color is achieved, pour the caramel in the center of the circle and spread it out with a hot stainless steel spatula. You can make your spatula hot by placing it on the stove eye for 20 seconds, or if you have a chef’s torch you can heat it up with that. If you try to spread the caramel with a cold spatula, it will stick terribly.

Next, wait a few seconds until the caramel starts to set, then score it into wedges with a buttered knife. After the caramel is completely hardened, break it apart at the score lines. My first attempt at making this garnish broke apart irregularly. I had to make a second one, and it turned out much better. Practice makes perfect (or in my case, adequate). Luckily it takes very little time to repeat the process, because hard caramel doesn’t take long to cook!

The swirls on the cake prop up each caramel wedge. I just love the effect.

European cakes are often sponge-based and less moist than what American palates are accustomed to. And although it’s not original, I brush the layers with simple syrup which is included in this recipe. It seems to be an accepted practice, and some even add a boozy note with the addition of bourbon, whisky, etc. Tradition in baking is a wonderful thing, but a dry cake is not. The syrup is an extra step but improves the end result, and if you’ve overwhipped your sponge it’s a fail safe for a moist cake. 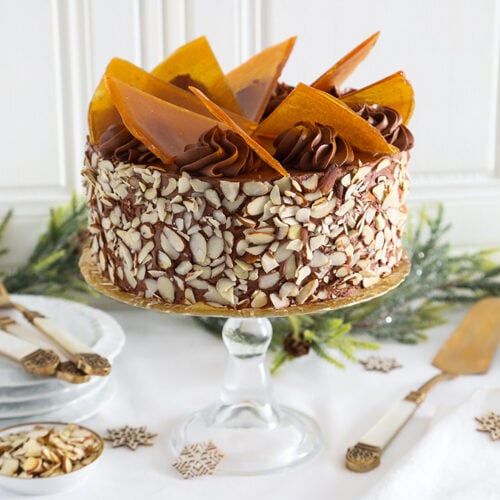 Heather Baird
Dobos Torte is traditionally a confection with thin sponge layers, filled and frosted with a rich chocolate buttercream, and covered with a clear sheet of caramel glaze. In this version the caramel is cut into triangles and placed in a fan design on top of the cake.The chocolate buttercream uses uncooked egg yolks. It's very important to use pasteurized eggs for safe use in this dish. If you're preparing this cake for guests who might be sensitive to this, or if you prefer not to eat raw egg yolks, I've included a quick chocolate buttercream recipe in the notes section that can be used instead.
5 from 4 votes
Print Recipe Pin Recipe
Prep Time 45 mins
Cook Time 30 mins
Total Time 1 hr 15 mins
Course Dessert
Cuisine Hungarian
Servings 10

Use the following recipe if you prefer to not make the buttercream with uncooked egg yolks. It is not as dark or silky as the yolk buttercream, but it is a fine replacement. The recipe is taken from the Dobos Torta recipe in the book Ultimate Cake by Barbara Maher. You may also choose to use your own chocolate buttercream recipe. Quick Chocolate Buttercream
Keyword chocolate buttercream, hard caramel, potato starch, sliced almonds, sponge cake layers
Tried this recipe?Let us know how it was!

I’m Hungarian and used to live in a neighborhood of Cleveland Ohio that had a large population of Hungarians. There was a Hungarian bakery where they had these cakes for sale and every family member wanted this cake to celebrate birthdays. The cake 16 layers of ultra thin sponge cake (almost looked like crepes) with the top a very thin layer of the caramel. Will definitely try this for Christmas. My family will be so surprised as we now live in Las Vegas. Thanks for the recipe.

WOW. Your cakes are always so beautiful. Thanks for all your elegant and grand cakes. Love to see what other people can do.

It’s a good recipe, and it’s really close to the one we make in hungary as the “original”, but there is one big difference: the caramel. We usually make the caramel with a tablespoon of apple vinegar (the lemon juice is also good, the point is the acid) and just a small amount of butter. You also need a last layer of sponge, a really really thin one. So you pour the caramel on this last thin layer, and because the butter and because the sponge soak up half the caramel, it will be just a little bit less hard,… Read more »