Here’s something I can’t get enough of lately – Brown Butter Apple Cider Blondies. They’re are filled with lightly spiced tender shredded apples and loads of chopped pecans. Brown butter adds a craveable toasty note. Although browning butter requires an extra step, it’s so worth it!

One of my favorite ingredients to use in fall and winter months is boiled apple cider. I always purchase Vermont Boiled Cider from King Arthur Baking (or you could try making your own.). It is truly a wonderful addition to this recipe. Nobody’s paying me to say that! As an avid baker I use it in everything from apple pie to apple fritters. You can absolutely still make this recipe if you don’t have boiled cider on hand. See the recipe notes for my suggestions and substitutions.

Brown butter will elevate nearly any baked good. It’s a special ingredient. When making it, butter solids can change fast from light to brown on the stove top. So watch the butter carefully as it cooks. It has several bubbly/foamy stages, beginning with big shiny soapy bubbles. Then, that will subside to smaller bubbles followed by foam that will start to look golden. And that’s when you need to remove the saucepan from the heat.

Pour the browned butter into a bowl with the milk solids that have browned and fallen to the bottom of the pan. Let it cool before using it in the batter.

Next, fry shredded apples in butter. How could that ever be a bad thing? Raw apples give off juices during baking, so cooking off some of that liquid in a saucepan just makes good sense. It also give you the opportunity to spice things up with a little cinnamon.

Mix up the batter.

All the best blondie ingredients are accounted for here. Such as lots of brown sugar. And this is the stage to add in a little boiled cider to give the apple flavor a boost! Next, mix in the dry ingredients and the pecans.

Spread the batter evenly into a 13×9 inch pan. This recipe makes a big pan of blondies that is made for sharing! Then, you’ll bake it until golden and puffy. And all the while you can enjoy the fragrance that fills your kitchen (which beats any fancy seasonal candle, if you ask me).

Creamy glaze flavored with boiled cider adds yet another layer of apple flavor. Spread it on and scatter the top with more chopped pecans.

It’s recipes like this that really make me feel present in the season. And there’s plenty to share! I hope you’ll enjoy making them (and eating them!) as much as I have.

This blog post is sponsored by Go Bold With Butter! View their other fall recipe right here. 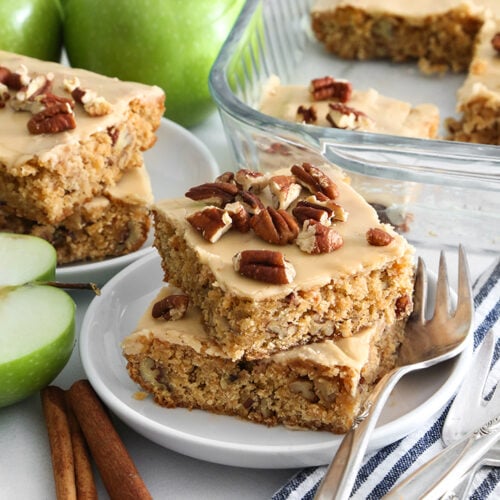 Substitutions Substitute 1/4 cup regular apple cider for the boiled cider in the fried apple mixture. Cook the mixture down until all of the liquids have evaporated before using it in the batter.  Substitute 2 tablespoons regular apple cider for the boiled cider in the glaze recipe. Add a pinch of cinnamon to add a little color to the glaze, if desired. What to expect: This is a delicious, chewy fall treat that has huge apple flavor. It’s a great alternative to apple pie at Thanksgiving. Browned butter is easy to make but requires a watchful eye. Make it in a stainless saucepan so you can best judge its color. It will be much harder to judge the doneness in a dark nonstick pan.
Keyword apple cider glaze, boiled apple cider, brown sugar, browned butter, chopped pcans
Tried this recipe?Let us know how it was!

OMG. They look Divine.
Thank you for sharing the recipe.
Will be baking up a batch as soon as I get home from getting groceries.
Have a great day and enjoy your evening.

Just made these today, and they are utterly delectable! I followed your (excellently written) recipe exactly, and ended up baking a double batch as my apples were on the large size. It’s such a hardship to have two whole pans of these incredible goodies in the house . . . j/k. Your recipes are always amazing: thank you so much for sharing this!

So happy you enjoyed this recipe!
(I don’t think you’ll have much trouble finding a home for that second pan.. hehe!)

Loved the recipe. Sooo goood! This was the first time I made brown butter, I also substituted apple cider for the boiled cider per your suggestion.