These fun Cereal Milk Pudding Shooters can be made with your favorite sweet breakfast cereal. This version uses Froot Loops, which makes a colorful party food that’s kid-friendly, too!

Sometimes I forget how good scratch-made pudding is. Whenever I make it I always wonder why I don’t make it more often. This pudding is extra good, because it comes with a hit of childhood nostalgia. We have Milk Bar to thank for introducing the world to cereal milk as an ingredient. The thing is, we’ve all likely made this as kids sitting in front of the TV, eating sugary cereal and watching Saturday morning cartoons. Who knew we’d be using it to make desserts?

Start this recipe with the biggest bowl of cereal, ever! Five cups of milk to four cups of cereal. I must admit, stirring this together was super satisfying. I was tempted to take a big bite.

Froot Loops (with marshmallow shapes) is my sweet cereal of choice, but you could use Fruity Pebbles, Cap’n Crunch, or even less sweet Cornflakes. You might remember my previous recipe made with cereal milk – Toasted Corn Flakes Cupcakes with Cereal Milk Pipettes. Still love those!

Cover the enormous bowl of cereal and refrigerate it. Let the mixture steep for at least an hour. Longer is better to coax out as much cereal flavor as possible. Aim for 2-3 hours.

Next, strain out the cereal. The loops will soak up some of the milk, so you’ll have less than you began with. You should end up with about 4 1/2 cups of cereal milk.

Divide the cereal milk. 4 cups will be heated in a saucepan, and 1/2 cup will go in a bowl with cornstarch and egg yolks to make a slurry. Add this little bowl of ingredients to the saucepan to thicken the pudding as it cooks.

After the mixture was all whisked together and thickened, something was obviously missing. The thick, pale yellow pudding didn’t really resemble the colorful Froot Loops cereal milk I’d had as a kid. A drop of red food color will make it look more authentic. This is optional.

Cool the pudding before dividing it between shot glasses. I used a piping bag with a tiny hole cut in the end to portion it into the glasses, but you could also just spoon it in.

Add some whipped cream and crushed cereal on top, and you’ve got instant party food! This recipe will make about 20 shooters served in these 2.4 oz. dessert shot glasses. However, you can also divvy the pudding up in larger servings to serve 6-8 people.

How fun would these be for a kid’s party? They’re so creamy and they’re a good summer refresher when chilled. They can be made a couple of days ahead, so if it’s hot where you live right now, wait until night time when it’s cooler to make them. It takes about 15 minutes on the stove top. Enjoy! 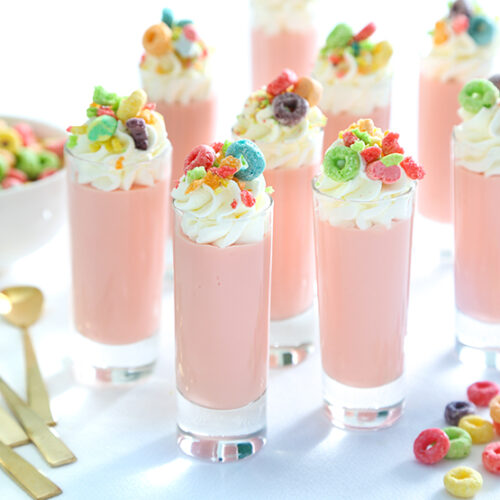 Heather Baird
This recipe can be endlessly varied with your favorite cereal. This version uses Froot Loops, which makes a fun and colorful party food. Kid-friendly, too! These take about 4 hours to chill completely, and can be made 2 days ahead.
5 from 3 votes
Print Recipe Pin Recipe
Prep Time 10 mins
Cook Time 15 mins
Total Time 25 mins
Course Dessert
Cuisine American
Servings 20 dessert shooters

Lighten this recipe by using low fat milk or almond milk. I’ve found that allowing the cereal to steep for 2 hours in the milk will impart more flavor.
Keyword cereal milk, froot loops, heavy cream, whole milk
Tried this recipe?Let us know how it was!

My soon-to-be 4 year old is having a unicorn birthday party in two weeks, and this is exactly what I needed! Thank you!!

Oh, what a sweet party theme. I agree, these would fit right in!