Ground sumac is the surprising magic ingredient in these rich chocolate brownies. It adds tang and enhances dark cocoa notes with new depth of flavor.

If you had asked me two weeks ago what to do with ground sumac, I would have rattled off a list of savory recipes and handed you my favorite kofta kabob recipe. It held no place in my mind as an ingredient for sweet things, but I’m not sure why. One sniff of the crimson powder reveals notes of tart raspberry, red florals, something lemony; a host of opportunity for the sweet kitchen.

While I’m still exploring the possibilities of ground sumac in sweets, there’s one place where it clearly belongs. Paired with dark chocolate, it punches up the flavor and brings forward hidden subtleties. You won’t be able to identify the spice on its own in these brownies, but you’ll know it’s there by the intensity of the chocolate flavor.

If you’re not familiar with sumac, it’ s a wild flowering plant that grows in the Mediterranean and yields red berries. The fruit is dried and ground which releases its tangy fragrance and flavor. It is widely used in Middle Eastern recipes, and most often in savory fare. If you reside in the US as I do, you’ll find it in the Middle Eastern spices section at the grocery store, and it is widely available for order online.

The brownie recipe I’m using originates from Ovenly, the salty-sweet themed cookbook from the eponymous bakery in New York. (see here). It’s hard to improve upon a recipe such as this, and the end result is pretty spectacular on its own, but the magic ingredient of ground sumac really ups the ante.

To further intensify and punctuate the flavors, a sprinkling of thin Maldon salt is scattered on top of the brownie batter. Most of the brittle flakes melt as the brownie sheet bakes, but you’ll know its there when you take a bite. If you own my second cookbook (Sea Salt Sweet) then you know I’m a huge fan of Maldon salt, as I’ve written a primer on the best salts to use in desserts. I’d urge you to pick up a small tin of this salt if you don’t already have it in your pantry.

Just like coffee brings out the flavors or chocolate, sumac plays the same role but in a different way. There’s a new tartness, subtle red cherry notes, a lingering fruity floral… something. The things I can’t articulate are best described by tasting the goods. I hope you’ll give these a try!

If you’ve experimented with ground sumac in your baking, I’d love to hear about your results! 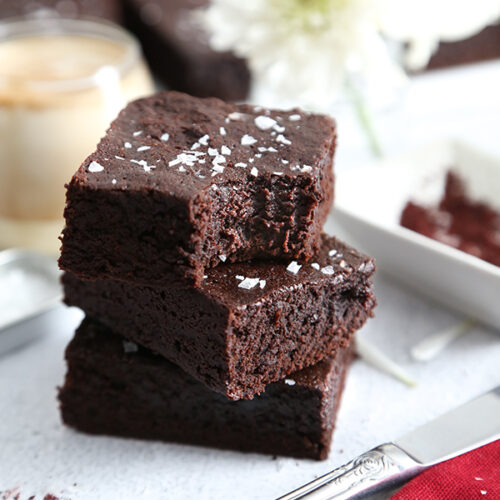 Adapted from Ovenly: Sweet and Salty Recipes
Keyword brownies, dark chocolate brownies, ground sumac
Tried this recipe?Let us know how it was!

Oooooh… I am intrigued! This is going to the top of my "to bake" list…

I hope you enjoy them!

I'd never tried sumac before but I got some to try out this recipe and love it! Made a 1/2 batch of these brownies today and they are gorgeous! So rich and decadent and that tang really comes through! Thanks for another one of your stellar recipes!

I'm so happy you tried the recipe, and that you also love the brownies! Sumac can be used in practically any recipe that involves deep chocolate flavor. I have a chocolate sumac snack cake in the works.

OOh I'll definitely try that one too! Snack cakes are my favourite.

This looks so good! My question is what to do if I don't have dark unsweet cocoa powder? Should I just use all unsweetened cocoa powder, or is there another substitution? Thanks!

Hi Rachel! Sorry for my slow response. You can use all unsweet cocoa powder. The color and flavor won't be quite as dark, but it won't mess up the formula for baking. Hope this helps!