Retro recipes don’t get any better than this! This candy has rich history to match its flavor with creamy coconut and pecan filling.

This old fashioned candy has been around for ages, but not quite as far back as its namesake. It’s something your grandma might have made. It originated in Pennsylvania, but it has come to be a southern favorite – mostly because we’ll eat anything if it has a can of sweetened condensed milk in it.

When I first made this candy I didn’t know its history, and pondered the fact that coconut, which is a main ingredient, didn’t arrive in the United States until late 1800s – long after Mrs. Washington’s time. It turns out that these candies originated from The Martha Washington Candies Company by purveyor Elie Sheetz, which was a confectionery during the early 1900s. The business thrived until the Great Depression, when most shops closed. This recipe survived and has been handed down for generations!

Like most handed down things, this recipe can vary slightly according to its origin within a family (or community), but most all of them have sweetened condensed milk, coconut, and pecans. The version I like most has chopped maraschino cherries folded into the filling.

The filling is rolled into balls and chilled, then enrobed in chocolate. When the candy comes to room temperature, the centers become soft and gooey. These little morsels are small but potent!

This recipe makes quite a lot of candy, and the first pieces you dip may look a little imperfect until you get a little practice. (Taste-test those first ones, and you’ll eat the evidence!) The more perfect pieces can be placed in mini cupcake wrappers, bagged in cellophane, and tied with gift tags for lovely holiday gifts! 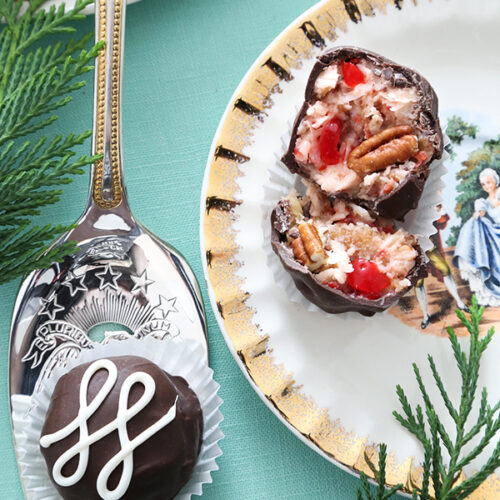 Keyword christmas candy, martha washington candy, vintage recipe
Tried this recipe?Let us know how it was!

I love retro candy recipes. Thank you for posting this recipe. It looks delicious.z

This is my fav version of this candy, TY.