This Depression Era Peanut Butter Bread was inspired by a 1932 cookbook recipe and uses simple pantry ingredients. It’s rich with peanut butter flavor and can be endlessly varied with a smear of your favorite spread.

I’m slightly late to the game with this recipe, as the original was posted to Reddit last year and became internet famous during quarantine. Depression Era Peanut Butter Bread harks back to a 1930’s Five Roses Flour cookbook published at the height of the Great Depression, and contains recipes for home cooks who may not have a large stock of fresh ingredients.

I did some research before making this recipe because lots of people have made this bread. Almost every account had the same recommendation – more peanut butter.  I made the version as written the first time around and agreed with everyone else – more peanut butter!

The second time around I tweaked the amount of peanut butter and added wildflower honey. This was a wonderful improvement! One slice will practically make a meal topped with anything you want to throw at it: Nutella, whipped cream cheese, a drizzle of honey, more peanut butter (and sliced bananas!). Or use it to make the ultimate PB&J sandwich.

Here are the four stages of simple mixing – first whisk the dry ingredients together. (I’m using pink salt in the first picture if you’re wondering what that is!) Second, mix the peanut butter and honey together in a separate bowl. Third, add the peanut butter mixture and milk to the dry ingredients. Finally, mix everything together until a thick, sticky batter is formed.

Scrape the batter into a greased 9×5-inch loaf pan and bake for about an hour. Quick breads usually crack in their centers as they bake. So, I recommend helping this along by making a line in the center of the batter using the edge of a rubber spatula.

I checked my loaf at 1 hour and it needed a little longer according to the toothpick test. So I tented it with foil so it wouldn’t over-brown.

What to expect from the oven.

The end result is lightly sweet, slightly crumbly, and rich! It’s best enjoyed with a tall glass of ice cold milk. I’m already thinking of making another loaf with a cup of chocolate chips added to the batter, for chocolate-peanut butter cup flavor!

My updated version of this recipe doesn’t stray too far from the original. However, I’m including the original formula in the footnotes if you’d like to give it a try first. It’s such a simple bake and I’ll be making some in colder months when we crave a stick-to-your-ribs snack. Enjoy! 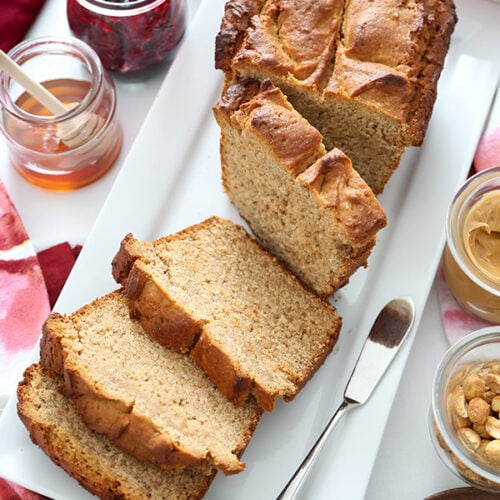 Glen & Friends Cooking – a video of the making of the original recipe.

Reddit r/Old_Recipes– this thread is filled with information and reviews of this bread.

you have 2 cups of flour listed as 300 grams that doesn't sound right I loved the recipe and plan to bake this bread this weekend but am weary of flour amount.

Hi Elopez0218!
I recommend following the weights of Glenn and Friends cooking mentioned in the footnotes of the recipe, which is 500ml(roughly 254g). Some of the cup measures I have at home are slightly larger than others (the American 'cup' volumes are a bit troubling between manufacturers.) I've updated the recipe with this recommendation, and I hope this helps.

My sister LOVES all things peanut butter; this just shot straight to the top of my "to make" list! Thank you for tweaking the recipe to our (present day) tastes.

Just made this today – it’s in the oven now! Added choc chips too 🙂
Fingers crossed!

Oh wow, I bet that will be awesome. Hope you love it!

Making the bread today. I am leaving the salt out. Made a pan last night and I could taste the salt. Adding more peanut butter today. I think it will be great.

I missed the boat somehow, my loaf came out heavy and flavorless. Most likely operator error; leaves me wondering if peanut butter powder would substitute. Glad I tried the recipe.

I am going to use some grape jelly swirled into the batter. I am always looking for ways to use up old peanut butter, but have a surplus of grape jelly too. I will let you know how it turns out. Am using a solar oven to bake it to save on electric. Baling usually does well in these ovens even though they don’t get as hot as 325°F. It it clouds up and threats rain I will finish it up in the oven at 250 to 300°F.

Well progress report! Sun oven (AllSeason brand) an hour into baking had a sprinkle of rain and may even 15 minutes of clouding up. I thought it would keep raining, so I pulled the bread and put it into the oven at 280°F. It had already risen and was quite hot. No sooner I put the bread in the oven the sun came back out. My rationale for the 280°F instead of 325°F was that the dough was already cooking at a lower heat, and I did not want to cook it hard on the outside at the higher temp… Read more »

Thank you for letting us all know how it went! The Sun oven baking method sounds so interesting. Maybe I’ll get to try it one day.

Hello, young aspiring baker here! Just wanted to say thanks for the recipe! Its in the oven right now, and it smells heavenly. The batter was amazing and pretty simple to make. Cheers!

Hi, I wanted to ask if the recipe will work with peanut butter that doesn’t contain the additives that make Jif shelf-stable (a PB with just blended up peanuts, basically). I have a jar that’s too big and wanted to try out this recipe!

Hi Sonal, I haven’t tried natural peanut butter in this recipe, but I think it will work as long as it is stirred together well. Sometimes natural PB will separate, so just make sure it’s well blended before using.