Amaretto cupcakes are frosted with a tall mound of coconut whipped cream and covered with a flurry of shaved coconut. Each cupcake has a hidden cherry inside!

We may not have a white Christmas this year, but there still could be a wintry scene at your table! These snowy-looking cupcakes are pretty and simple. They’re even lovelier dressed in foil cupcake liners and decorated with retro silver pine picks.

Amaretto and maraschino cherries were made for each other, if you ask me, so a maraschino is tucked into each cup of batter before baking.

Aren’t these tree cupcake picks just, dreamy?! You can find them in my friend Amanda’s shop, right here. I really love her eye for curating nostalgic, kitschy baking decors.

The whipped coconut frosting makes these cakes lighter than you might expect, especially if you’re anticipating the sweetness of buttercream. We liked the frosting lightly sweetened, but extra sugar could be added to suit your sweet tooth. 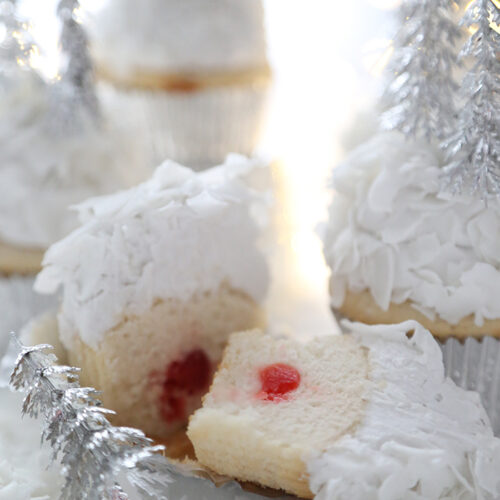 Heather Baird
Amaretto cupcakes are frosted with a tall mound of coconut whipped cream and covered with a flurry of shaved coconut. Each cupcake has a hidden cherry inside! Plan ahead. The coconut milk needs to chill for several hours or overnight before using it as a frosting ingredient.
No ratings yet
Print Recipe Pin Recipe
Prep Time 20 mins
Cook Time 17 mins
24 hours chill time 1 d
Total Time 1 d 37 mins
Course Dessert
Cuisine American
Servings 12

Keyword amaretto liqueur, coconut milk, coconut shavings
Tried this recipe?Let us know how it was!