My good friend Christen had a birthday recently so I made her some extra special cupcakes. They were inspired by a name given to her by her sister Stephanie (during a Skype call, involving glasses of wine, I’m told) – vanilla sunset– because Christen is the only blonde sister in the family. I thought that was just the cutest thing, and when I heard those words I immediately thought – vanilla sunset needs to be a cake!

These were so much fun to make. The cake portion is flavored with pineapple juice, and in addition to that, the colorful layers are flavored with pineapple, orange and coconut extracts. See that little pipette sticking out from the side? That’s where the magic happens. It’s filled with a mixture of coconut rum and grenadine. Just give it a squeeze before you take a bite – yum! Such an easy way to spike a cupcake, and it adds some interactive novelty for parties and special occasions.

Let’s talk about these cupcake toppers for a minute. Too stinkin’ cute, right? I had to have them for these cupcakes, because once when I was having a very bad day, Christen told me my cardigan was everything. Sometimes that’s all it takes to turn things around – a little bit of kindness – your friend telling you that your cardigan is everything.

The pipettes can be found for purchase here.

They open up a whole new world of possibility for flavoring sweets. I can’t wait to use them with other desserts (I’m looking at you, choux puffs!).

A few notes about these cakes:

seeds in both the cupcake and frosting recipe, and I recommend you do the same. Tahitian vanilla has just the right fruity-floral aroma for this cake. It’s a pineapple and coconut flavor-elevator!

I baked these cupcakes in white cupcake liners. I usually double up on cupcake liners because it looks neater (cleaner?) somehow, but not this time. A single liner will allow all those pretty layers of color to show through. 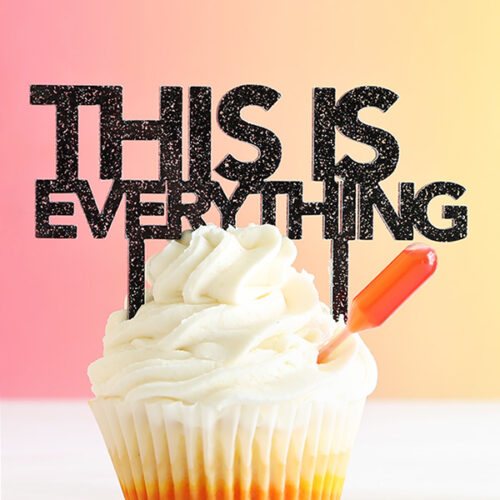 Heather Baird
The cake portion of these cupcakes is flavored with pineapple juice, and in addition to that, the colorful layers are flavored with pineapple, orange and coconut extracts. See that little pipette sticking out from the side? That's where the magic happens. It's filled with a mixture of coconut rum and grenadine. Just give it a squeeze before you take a bite – yum!
No ratings yet
Print Recipe Pin Recipe
Prep Time 25 mins
Cook Time 22 mins
Total Time 47 mins
Course Dessert
Cuisine American
Servings 13

Keyword coconut extract, grenadine, pineapple juice
Tried this recipe?Let us know how it was!

Absolutely beautiful cupcakes! I am now having a "why didn't I think of that?" moment over those pipettes. I am definitely adding this to my "must try" list.

They are soo cute and the toppers too.
You are 100% right.
A small kindness can turn a day around..and sometimes even a life.

These are so pretty! And I love those cake toppers, so awesome!

I love how they were inspired by a complete random source! They are gorgeous to look at and I bet they taste even better. How clever are the pipettes to add in extra flavor!

these are awesome!!! one of my favorite things you've made, ever! love them!

Absolutely amazing!! Love all your recipes. Your presentation is perfect evertytime, that's the best part. Im sure they taste divine too

omg, those cupcake toppers. i die. <3

Love the colors of the cake and the toppers are great too!

Beautiful! I bet that was the best present ever!

I love how these cupcake just scream summertime and how you added the rum pipettes too! Awesome idea, I bet they taste delicious!

YUM! And I love the bit of booze!

I bet Christine felt very special — what a personal homage to a good friend!

These look amazing. I totally need to learn how to make this. I feel a recipe test coming… (when I am bold enough!)

Lemon extract will work well in place of the orange. The overall flavor will still be tropical!

Thanks for asking! -h

Could I use Lorann oils instead of orange and coconut extracts? Also can I leave out the pineapple juice so the untinted portion is just vanilla and not more pineapple?

Where did you get the candles? I didn’t see a link for those.

Hi Amber,
If I remember correctly, I found these on Etsy. There are some similar to be found there. Search ‘vintage birthday candles’ and you’ll find some.

This is one of my favorite blogs! My son’s birthday is Sunday and he requested Mango ice cream and cupcakes… These cupcakes popped into my head to go along with the flavor profile of his ice cream. BUT I live in Puerto Rico and there are no Tahitian vanilla beans in the island and I don’t have time to order any. What can I use as a substitute and how much?

Hi Tasha! So glad you enjoy this post. Tahitian vanilla beans can be scarce these days (and kind of expensive), you could substitute 1 teaspoon of pure vanilla extract for the seeds of 1/2 vanilla pod in the cake and frosting. I hope this helps. I’m so glad you’ve enjoyed this post.