Hello, hello! It’s Monday so I think we should have a cupcake (maybe two) – or at least plan to enjoy one of these tomorrow on St. Patrick’s Day. I love a chocolaty bite after Irish stew, and these are rich indeed! They are heavily infused with malty flavor thanks to a dose of Guinness Draught.

I will find any excuse possible to use my chef’s torch. It’s one of my favorite kitchen gadgets. It’s ideal for toasting the beer-flavored marshmallow meringue on these cupcakes, but if you don’t have a chef’s torch they’ll toast up mighty fine under the oven broiler.

The cupcakes can be poured into paper liners if you prefer (and if you’re looking for one less pan to clean). If you plan to use a kitchen torch to toast the frosting, remove the liners first because they’ll easily catch fire.

My favorite part of this confection is the toasted beer marshmallow meringue topping. The appearance against the dark chocolate cupcake reminds me of the beer foam on a freshly poured pint. Its flavor is nuanced with a Guinness Draught reduction, giving the sweet marshmallow notes of malt, coffee and caramel.

May the road rise up to meet you, friends! 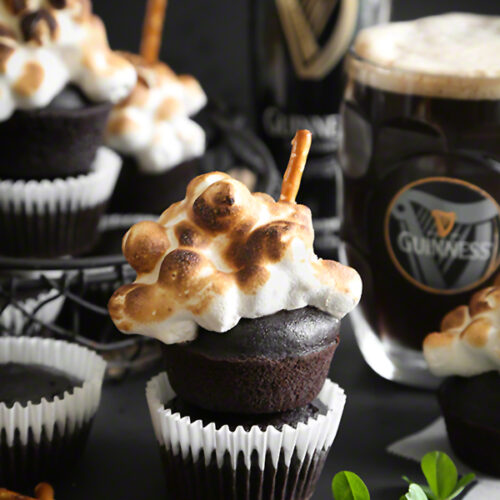 Keyword guinness draught, marshmallow merinuge
Tried this recipe?Let us know how it was!

the visual here is outstanding–i'm so impressed with your creativity! as a bonus, these must be extraordinarily delicious too. bravo!

Wow, that gif is amazing! Cupcakes on fire! 😀 I would love one of these, chocolate guinness is a great flavor 🙂

Looove the white decor on those cupcakes!

Fantastic! Those are great cupcakes.

Wow! This is a work of art!

This is seriously genius on a whole other level. SO fun!

Love the video & the music.
I have a couple of bottle of Guinness in the fridge, waiting for chocolate cake.
So, maybe tonight, Li'l Daisy & I will bake these sweeties!

NOW THIS IS SINFULLY GOOD!

I keep having problems with my cupcakes falling flat as soon as they leave the oven. I notice that there is no baking powder or soda listed, is the Guinness supposed to be the levener? If so, what else could cause the cakes to fall into really dense and delicious brownies instead of the domed and fluffy delights shown?

Hi Caleb, Most chocolate stout cakes are pretty dense (these are) but they shouldn't be falling flat after they leave the oven. It's hard to say what happened. The Guinness is the only leaven used in the recipe. Overbeating can contribute to fallen cakes, so be careful when mixing the beer into the batter. It might be a good idea to calibrate your oven, too. I like to use an oven thermometer that hangs right inside the oven to gauge the temperature. An under-heated oven can cause dense or fallen cakes, too. Otherwise – if things are still not going… Read more »

I made it using half teaspoon baking powder and it came out perfect!

Would like to make these and was wondering: How should these be stored and how long will the meringue hold up?

Hi Natalie! These can be stored in the refrigerator. Bring them to room temperature before serving. They’ll hold up a couple of days.