I’ve always wanted a waffle cone maker, but admittedly, there’s very little space in my cabinets for one to live. I’ve talked myself out of buying one many times, but the desire came back anew when I walked into my favorite ice cream parlor. I can testify that the warm fragrance of freshly made vanilla waffle cones is strongly persuasive (not that I needed much arm-twisting in the first place). So, I got one.

I fully expected the machine to be single purpose (waffle cone iron = only waffle cones) but I’ve found it has a second, and maybe even better use for making one of my favorite coffee time treats – stoopwafels!

For those not familiar, stroopwafles are thin cookie-like waffles with a chewy caramel syrup in the center. They hail from the Netherlands, and recently my friend Darla (who happens to live in Nederland) sent me a care package with all kinds of delicious Dutch treats inside. To my delight, authentic stroopwafels were included. They were better, more dense with filling, than the ones I can find locally. That made me curious enough to seek out a stroopwafel recipe. Until now, I’d never dreamed you could make them at home. I’d pondered their thinness while eating one, and figured it defied any tool that inhabited my utensil drawer. To my great surprise, scratch-made stroopwafels are achievable.

If you’re interested in making them too, you can find the waffle maker I own here. It’s not so awful to store if you keep it in its original box (square things are easier to stack than roundish footed things). Or, if you’re a die-hard stroopwafel fanatic, you can buy the genuine article here (though stroopwafel makers seem to be more expensive than their waffle cone counterparts).

The batter is really easy to whip up. It’s made with yeast, so it has to stand about 45 minutes before you use it. The dough doesn’t raise much, but the yeast definitely adds flavor and helps keep the super thin waffle from tearing when you cut it in half.

It took me a few tries to get the right quantity of dough for the waffle cone maker. Most of the waffles were a little lopsided, so I used a large pastry ring to cut them into 6-inch rounds.

Perhaps the most challenging part of the endeavor is cutting the already thin waffle into two even thinner pieces. You need to do this while the waffle is still hot. I used a large serrated bread knife, and with gentle sawing motions, cut the waffle in two. I found it easiest to position a waffle at the corner of a work surface, that way you can manipulate the movement of the knife easily as you cut.

The filling is easy enough to make in a saucepan on the stove top. I used molasses, though treacle is called for in the recipe (use whichever you prefer, but be forewarned that molasses is a bit stronger-tasting). When mixed with brown sugar and butter, it yields a deliciously rich and chewy filling. I was eating it warm from the saucepan with a spoon.

I love these so much, I already have plans for a cookie butter and caramel-filled version. I urge you to try them if you have the opportunity – or the waffle cone maker – or both. 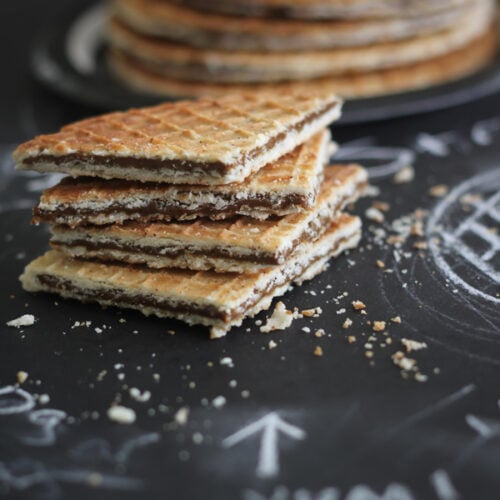 Heather Baird
This is a delicious Dutch treat that goes well with afternoon tea or coffee. The recipe calls for treacle, which is a European ingredient similar to molasses. I used molasses, but it is bolder and darker-tasting than treacle. If you can’t find treacle, and would like a milder tasting filling, golden molasses or sorghum syrup may be used instead.
No ratings yet
Print Recipe Pin Recipe
Prep Time 1 hr
45 minutes rise time 45 mins
Total Time 1 hr 45 mins
Course Dessert
Cuisine Dutch, European, Nederland
Servings 10

Keyword active dry yeast, ground cinnamon, treacle
Tried this recipe?Let us know how it was!

Looks delicious!!! I love your blog
hugs from Spain

These stroopwafels look so delicious! I'm Dutch, so am happy to see a stroopwafel recipe on your blog!

I love them! They look amazing, really have to try your recipe (maybe before I have to buy the machine LOL)!
Xoxo Laura

Yum.
These look delish! I'd never even though of making these at home before; I've only eaten them once or twice. This looks like fun though. And think of all of the things you could fill them with…

Oh my goodness, I love these!! Such a fun idea!

I have always wanted to try a stroopwafel! I have a pizzelle maker; going to give that a try 😉

Never heard of stroopwafels, but they look amazing! Thanks so much for sharing!

When I was college there was a pizza place that would very occasionally have stroopwafels in limited quantities…of course in all the times I was there they never had them 🙁 I've been wanting to make waffle cones for awhile, so the fact that I could make these as well might be a good excuse to buy a waffle cone maker!

good lordy these look so tempting. I've never made waffles and I don't have a waffle iron but i'm tempted to go out and get one just to make these naughty little beauties!

One of the most delicious and addictive sweets ever!

Woop, stoked to see a Dutch recipe on your blog 🙂 You did a helluva job! 🙂

Love these! They remind of something my mom made back in Russia. I can see this with a different filling. Where did you get your waffle form/maker?

OMG, I love stroopwafel! These look perfect and delicious.

This is such a great idea! Looks perfect and your photography is simply amazing!

'Yum' is right! My god, these look amazing, and the photography is so perfect. Captures the essence and beauty of this little delicacy so well!

If I didn't already love your blog I would totally have fallen in love with it after this post! These are my most favorite cafe treat in the world. I think I need to get myself a waffle cone maker. Good thing Christmas is coming up soon!

These look absolutely perfect to enjoy with a cup of coffee!

Loving these delicious stroopwafels.. and I definitely want a cookie butter filling recipe too, sounds delicious!

I'm Dutch and I never made my own stroopwafels… Thank you for the delicious recipe, I only need to buy a waffle cone maker!

i love these cookies. i would think they are hard to make but you made it look easy!

Yum! I want one now! I have wayyy too little kitchen space for all of my impulse buys… but this looks handy enough to invest in! Thanks for sharing!

My coffee always needs a companion and these li'l sweethearts are just what
I'd love these days!

Love these guys. When I was in the Netherlands I bought a bag and ate them all…literally making myself sick. But, SO good. Considering a waffle-cone maker now!

I have a pizzelle iron….wondering if that will work.

Love your blog! ^_^
Nice to read you, Carla.
Hugs from Rome

Haha! This one especially made me smile 😀 Discovered these babies for the first time abroad in Europe and loved them! At first I thought they'd taste like tiny waffles, but, oh wow, they're so much more than that! Thanks for the recipe.

They taste even better if you let them lie on top of a cup of steaming hot coffee. It makes the caramel get soft and the flavor comes out even more.

nice! thank you so much! Thank you for sharing. Your blog posts are more interesting and impressive. I think there are many people like and visit it regularly, including me.

What should be the temperature of the stroopwafel iron? I have one which has temperature settings

Oh my my ! I love stroopwafel! These look perfect and delicious. Thanks for recipe.

I received a pizelle iron as a gift recently and I have been obsessing over making my own stroopwafel – so many recipes and nothing looks right! Thank you for your helpful tips and tricks! I hope to make these this afternoon!

Thought they were reeeely rich, but that sauce is amazing

I literally just bought a giant bag of stroopwafels! Making them at home sounds easy and delicious! Thanks for sharing!