The non-alcoholic Shirley Temple cocktail has a reputation for being super sweet, so it’s no surprise that it translates well into cupcake form. I also really like the grown-up Shirley Temple Black cocktail, which has all the ingredients of the original version, but with a shot of Kahlua (or Campari. Or dark rum, some would argue). So, I decided to make these cupcakes both ways.

The cute little bows on top of the cupcakes are plastic ring birthday party favors. I think they make adorable toppers for Shirley Temple cupcakes. To differentiate the two cupcake flavors, I gave the non-alcoholic cupcakes a pink bow and the Kahlua-flavored cupcakes a black bow.

Honestly, I’m not sure which version I like better. Both are distinctly different and delicious. Grenadine plays a huge role in the flavor of the beautiful pink icing that goes on both types of cupcakes. Most grenadine is flavored with pomegranate or black currant juice, so you can expect a fruity-slash-berry sweet-tart flavor. I used Sprite soda in the cupcake batter, which gives the baked cakes a really subtle flavor that’s hard to put a finger on, but it all works together so very well flavor-wise. If you prefer using ginger-ale in your Shirley Temples, then you can certainly substitute it for the Sprite in the cake batter.

Okay, so this part of the process felt a little deviant, somehow. You literally give the cupcakes a shot of grenadine with a syringe! These flavor-injectors are normally used for injecting marinades into Thanksgiving turkeys, but I love using them to give cupcakes a sweet-hit of flavor in their centers. The syringes are inexpensive, and you can find them online here.

Most of the syringes have metal needle-tips, but if you can find one with a plastic needle, those work fine for cupcake injecting and are less dangerous to come across when rifling in your utility drawer.

The Shirley Temple Black cupcakes were treated in the same manner. Instead of grenadine, they each got a shot of Kahlua in the center. These were so good! They might be my favorite of the two. Maybe. It’s hard to say for sure, so more taste-testing is in order (wink).

One thing is for sure, nothing beats biting into one of these and finding that there’s more to offer than just cake inside. The injected syrups keep the cake so moist and flavorful.

An important thing to note: Don’t overfill the cakes with grenadine or Kahlua. I used just one teaspoon in each of my cakes. If you use too much the liquids will completely soak through the bottom of the cupcake liners and then you’ve got a mess on your  hands. Or on your pretty white tablecloth.

These are really easy to make, and if you don’t have a flavor-injecting syringe, you can cut a little divot in the tops of each cupcake and drizzle syrup in with a spoon.

When party-time rolls around, I’ll definitely serve these cupcakes alongside their cocktail counterparts. I’ve included the drink recipes in this post if you’d like to do the same. 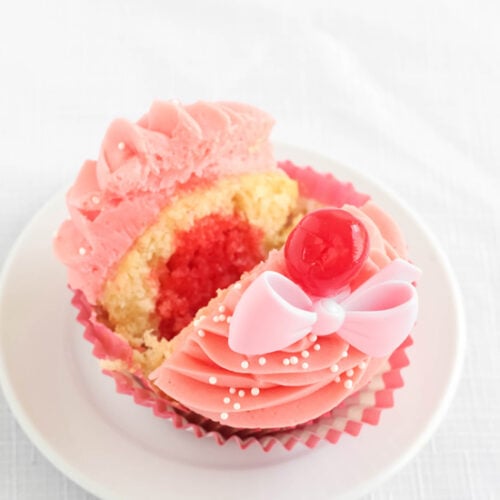 Heather Baird
This recipe is written assuming that you want to make both Shirley Temple and Shirley Temple Black cupcakes. If you want to make an entire batch of original cocktail Shirley Temple cupcakes, just replace the Kahlua with grenadine, and for an entire batch of Shirley Temple Black cupcakes, vice-versa. I like to give my cupcakes a stately crown of frosting but not everybody is into that much on one cupcake. Feel free to half the Grenadine Buttercream recipe.
5 from 1 vote
Print Recipe Pin Recipe
Prep Time 35 mins
Cook Time 22 mins
Total Time 57 mins
Course Dessert
Cuisine American
Servings 15

Shirley Temple cocktail recipe with variation Yield: 1 serving 6 oz. lemon-lime soda, such as Sprite (can use ginger-ale) 1 1/2 tablespoons grenadine Maraschino cherry for garnish Pour the lemon-lime soda into a Collins glass filled with ice. Add grenadine. Garnish with a cherry and a fancy straw. Stir drink just before sipping. Shirley Temple Black variation: Add 1 to 2 oz. Kahlua and an additional cherry.
Keyword grenadine buttercream
Tried this recipe?Let us know how it was!

Heather, these are SO CUTE! I loved Shirley Temple movies and the beverage when I was a kid. Love those bow-ring toppers, too.

These are so adorable!

Oh my gosh these are so cute! Grenadine buttercream sounds heavenly. Like the idea of injecting the syrup, too 🙂

I am loving these cupcakes. The colour of the frosting the little toppers. Everything is just soo cute x

I am loving these cupcakes. The colour of the frosting the little toppers. Everything is just soo cute x

So pretty! I'd love to taste these cupcakes.

These are so, so cute!

Oh wow, "injecting" that syrup into the cupcake is such a good idea! I reckon you could do that with lots of flavored syrups (I'm thinking rum syrup for example).

Ingenious! I just love this idea, and I love the idea of Sprite in the batter! Your photos are to die for. I just want to lick my computer screen! 🙂

These are so sweet! I love the hidden centre,I recently made some cupcakes with a hidden heart centre; http://myownbakeoff.blogspot.co.uk/2013/10/hidden-heart-centred-cupcakes.html

These are so adorable! I like the squirt of grenadine!

OMG I'm dying over the cuteness! I need an excuse to make these for my pink-loving-princess nieces!!! I have never heard of a Shirley Temple Black! I have only ever added vodka to a Shirley Temple, I think I was led astray!!!

What a cute idea! I remember drinking about ten Shirley Temples at a wedding when I was a kid and then running around like a maniac before crashing. Must. Exercise. Restraint.

These cupcakes are SO cute! You did an amazing job injecting a little bit of color into each cupcake too!

I've never had a Shirley Temple Black before but now I want to try one! Thanks for the inspiration Heather!

Oh gosh, these are like painfully cute! And a grenadine buttercream?! BRILLIANT!

Not only are these cupcakes gorgeous, I imagine the flavor is amazing as well! The injection technique is amazing, my mind is running with all the possibilities!

OMG are these cupcakes adorable!!!

i loved shirley temples as a kid. these look delightful!

Love grenadine, bowties and these cupcakes!

Where can I get those cute little bows? I didn't see any source posted. Thank you!

I love this idea! Shirley Temples were my favorite as a kid! Delicious!

I am loving these beautiful cupcakes:X Soo tasy

Flavor injector for cup cakes = genius!! These are so pretty!

Amazing! I have had Shirley Temple Cupcakes on my "make list" for ages, but there is no way I could have done them as perfect as you did!

I love your blog. I use to take a look when I can because I think you are creative. I have a pug too and a bulldog, and my blog has the name because of them.
Kisses from Spain.!!
loschatoschefs.blogspot.com

Super cute and nostalgic for me. PS Did you make the bow tie? If so, inquiring minds want to know.:) Thankyou for sharing your artistry with us !

I'd use it in my sugar cookies!
Your cakes look to die for! I am drooling! 🙂

Cutest cupcakes ever! Love the concept!

Beautiful! (and delicious) looking cupcakes! May I ask what the beverage next to them is called and if there's a recipe? : )

These are precious! Beautiful as always! Kahlua doesn't sound to me like it would taste very good with grenadine, but I'm willing to give it a try. Probably because I'm a bit of a lush. 😉

Oh gosh, these look too beautiful to eat! You've got some amazing decorating skills! I just discovered you blog and I love it :3

Ok, this is GENIUS! Dirty Shirleys are my go-to drink! How have I not make them in a cupcake form?? Definitely trying these 🙂

Made a spin off of your recipe for my sisters 21st birthday, the sprite cake was a huge hit. Very moist and delicious. Thanks for the great recipe!

Thank you so much! I'm making a cake and wanted a raspberry butter cream but could find no raspberry extract so I decided in a bottle of grenadine instead! Hopefully it works out well!

can i use cake mix for this

i was wondering if it's possible to use yellow or white cake mix?

Hi Cherry, you can use yellow cake mix in place of the scratch recipe. Thanks for asking!

Wow these cupcakes look beautiful! What a creative recipe. I haven’t had a Shirley Temple probably since I was before 21!!!!

It looks so yummy. I can't eat it. beacause it is beautifull.

I just made these cupcakes and made them with Cu4Cup gluten free flour using the same measurements in the recipe. They were so delightful!