Our family tradition is to make Snow Cream on powdery winter days. There’s something about its sweet, creamy flavor that reminds me of Tres Leches Cake (no doubt it’s all that sweetened condensed milk and vanilla in the three milks mixture). I had the idea to marry the two as a cake-cone, and since the paper cones are made to hold ice and syrup, I figured they would hold up to the saturation of tres leches.

What I wasn’t sure about – the baking part. I’ve never baked cake in a paper cone before, so I didn’t know what to expect. I was afraid the centers would be under-cooked due to the shape, but I’m happy to say that these baked up just perfectly!

If you decide to try baking in paper cones, I’d suggest getting some sturdy cones like these. Even though they held up beautifully through baking and all that luscious milk saturation, I decided to double up on the cones just in case. Hand-held, they felt a little sturdier, so you’ll probably want to have a few extra just in case you feel the need to double-up, too!

I had no special equipment to make these, just my standard size cupcake pan. I lined the cavities with bunched-up aluminum foil and nestled each cone’s pointed end into the foil so that they stood upright. I’m sure it would be more convenient to have something like this

in which to display them, but I did just fine without. They look just as pretty arranged together standing upright in a clear glass bowl or separately in glasses. A fork or spoon makes it easier to eat these, so stick one in each cake before serving.

Paper snow cones are needed for this recipe, or, if you’d prefer, they can be baked as cupcakes (yield 2 dozen). Be sure to use sweetened condensed milk in the sauce, not to be confused with evaporated milk. 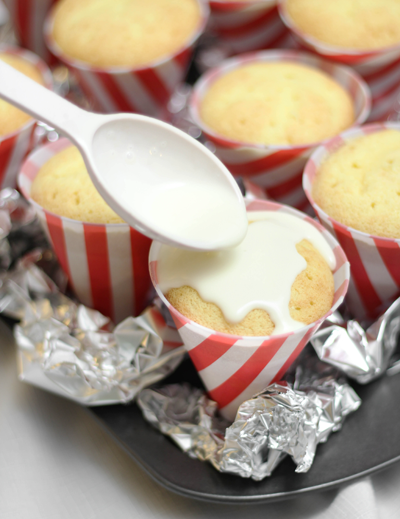 These are so whimsical! I love the cake in a cone idea!

Oh wow! So pretty! I am in love with tres leches.

Holy moley!! These are little cones of heaven!

So cute! The design is simple too much. I love the cone shape, so uniquie

oh so drooling and perfect for kids…sorry dear could not catch up long time, now am back on track

This is a brilliant idea! Tres leches is my favorite cake to make-it never goes past two days in my house! I'm happy to have a new way to make it now 🙂

Elizabeth @ Confessions of a Baking Queen

I love tres leches cake this is amazing in the paper cones!! what a brilliant idea 🙂

I cannot believe I've never thought of this — LOVE this idea. So adorable, Heather!!

I am in heaven this December – each post of yours is so beautiful and inspiring and makes me feel even more festive! I love this idea and am now wondering what else I could bake muffin/ cake mix in. Happy Christmas Heather!

You make everything look fun and delicious!

These are so adorable I've been wanting to make something similar to this for a while!
http://myownbakeoff.blogspot.co.uk

thank you, love this idea