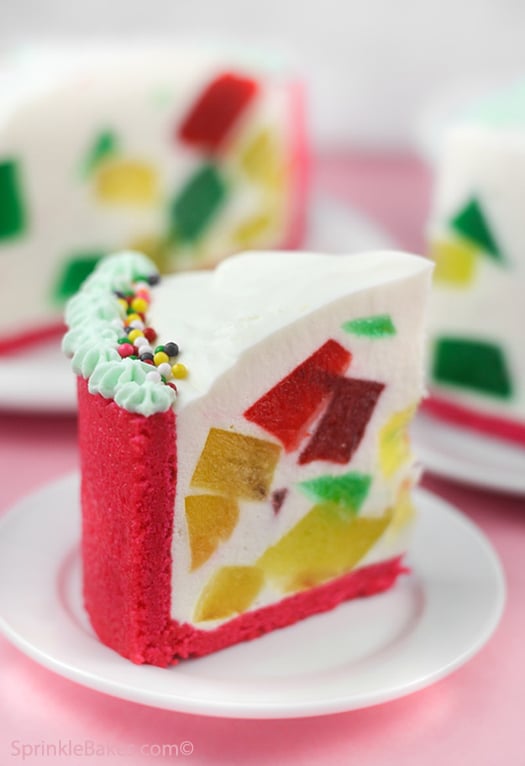 Of all the nostalgic desserts to revive, I think this one is most fashionably worthy.

This cake is based on a recipe that ran on the back of Jello boxes during the late 1950’s.  Long gone are the days when Crown Jewel Cake (a.k.a. Broken Glass Cake) was made with powdered, processed, and if I may say – oldfangled – dream whip.  The hydrogenated stuff has since been replaced with real cream, which makes it much tastier. 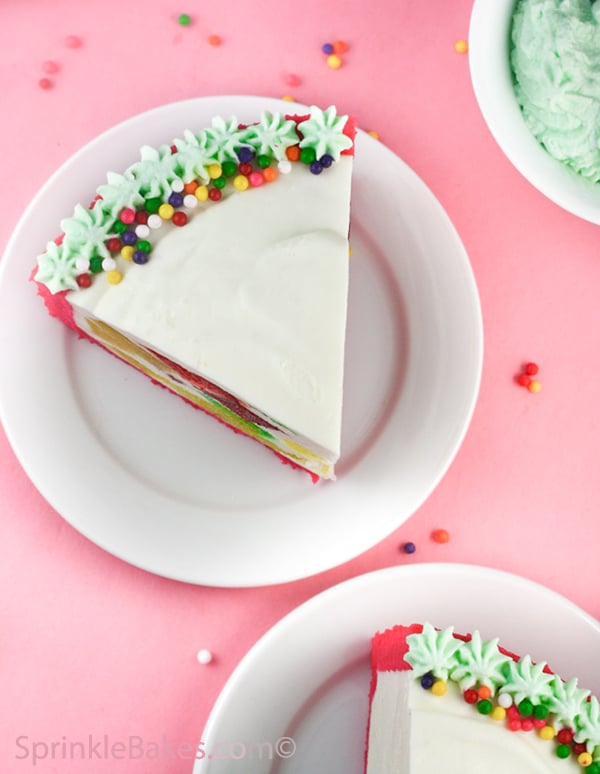 The original 50’s style recipe has a graham cracker (sometimes cookie) crust, so it is really more like pie than cake.  My vision for this recipe was to truly make it cake-like by surrounding the creamy filling with a pink jaconde sponge.

Each time this cake is sliced, it’s like getting a little piece of artwork.  You never know what shapes and colors you’ll get next! 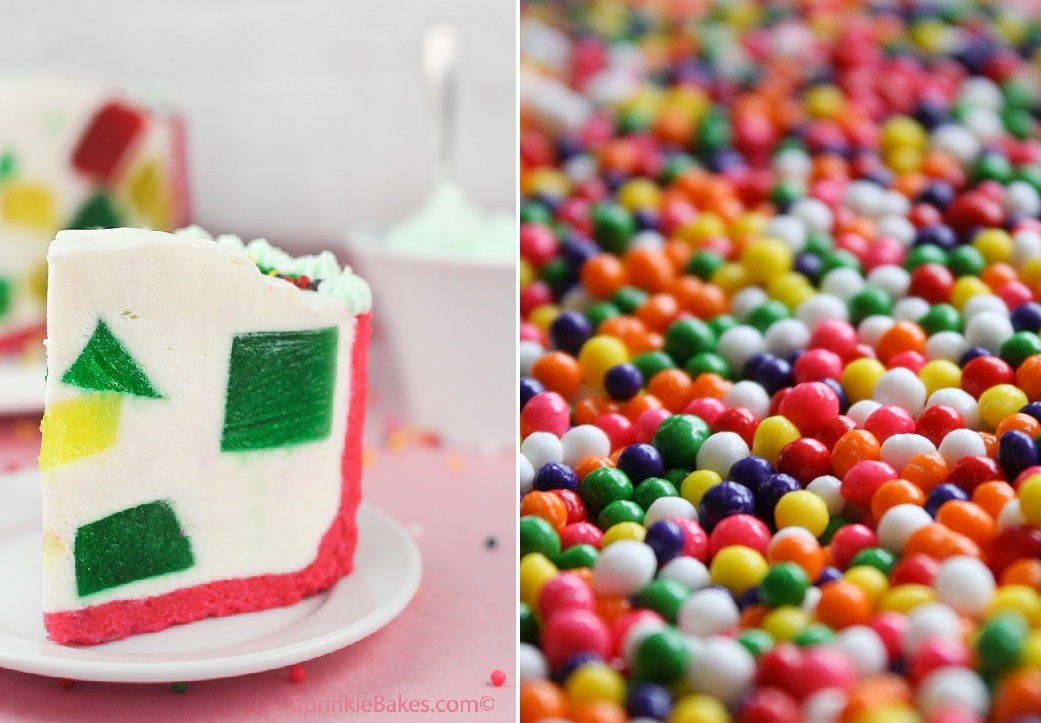 At the bottom of this page, you’ll find a link to the original recipe.  It’s a little less work than my Jaconde sponge version, and still very pretty.

Prepare 3 oz. flavored gelatin packages (I used 3 different colors/flavors of Jello brand) as directed on the box.  When set, cut into cubes and store in refrigerator for later use. 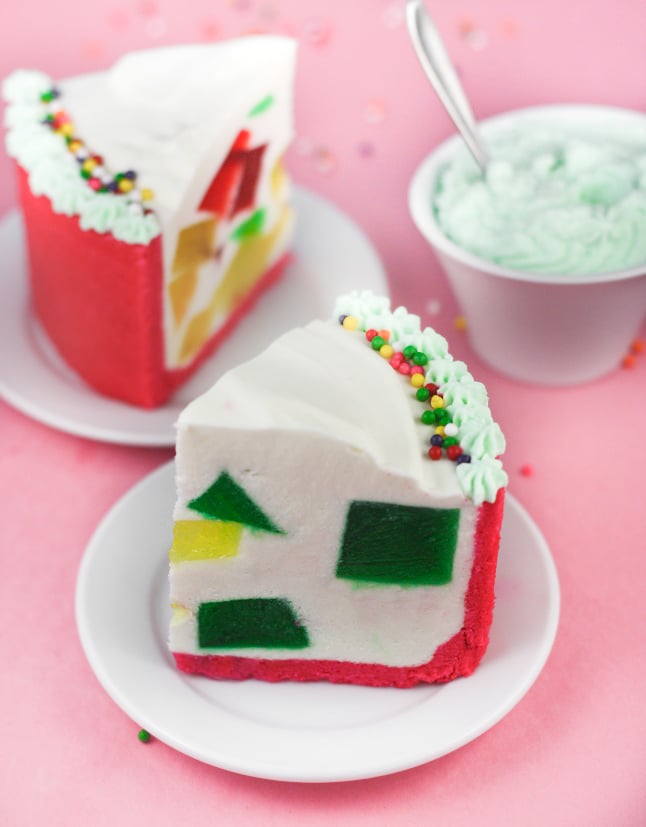 Using a stand mixer fitted with the paddle attachment, beat the almond flour, 3/4 cup confectioners’ sugar, flour and eggs until combined, stopping to scrape down the sides of the bowl as necessary.  Add the 1 egg yolk and food coloring, then mix again to combine.

In a separate bowl, whip the egg whites with an electric hand mixer.  When foamy, gradually add in the granulated sugar until a white, thick meringue forms.  Gently fold the meringue into the almond flour mixture.  Add the melted butter and carefully fold again, as to not deflate the batter.

Pour mixture into jelly roll pan and bake for 5-8 minutes. Watch it carefully as it cooks quickly and will burn easily.

Remove cake from oven and turn out onto tea towel.  Trim edges and cut one long piece of jaconde big enough to fit around the inside of the 7″ spring form pan.  You may have to piece together a bit of the crust, as shown in the first picture below. 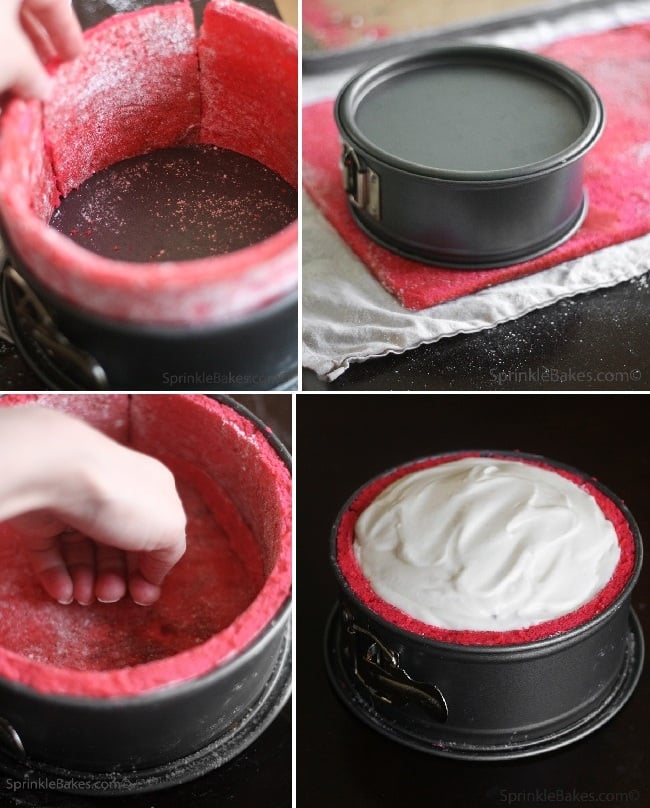 Using your pan as a guide, cut a circle of cake from the jaconde (upper right hand picture) and press it into the bottom of the pan evenly.

Put the pineapple juice in a small sauce pan and sprinkle powdered gelatin over; let it sit for a few minutes until dissolved.  Heat gelatin/pineapple juice mixture on the stove-top until melted.  Remove from heat and stir in the cold water.  Transfer to a small bowl and let stand on counter-top until it cools slightly.  Place in refrigerator until mixture has completely cooled (about 5 minutes) but hasn’t set up – it should still be liquid.

Pour the mixture into the sponge-lined pan and chill for at least 6 hours or overnight.

I’m such a sucker for vintage recipes, I couldn’t help but include the original (I should say, original sans “dream whip”).  You can find a printable version of it  [HERE].

What a pretty cake. I have never heard of such a thing before! Love those vibrant colors!

Love it as usual! It really looks like stained glass. Yum to eat, cute to look at! 🙂

That is the prettiest cake ever. I'm not sure I would want to eat it!

This is gorgeous and looks scrumptious. I have a few old jello recipe books. I have seen that recipe in them. dream whip, pft.

Oh my gosh! What a fun and fabulous cake. Can you be my neighbor?

So pretty! I swear, you're a dessert artist.

This looks amazing! It seems like it would be so perfect for a little get together. 🙂

Oh my goodness, that is just beautiful! I love your take on the 50's classic!!

This looks too cute and I just love vintage recipes, thanks for including both!

this is such an awesome looking cake! i love all the different shapes. you're very talented 🙂

Oh my word, that right there is an incredible work of art. Being a product of the 50s, I'm just going to have to surprise my Mom with one of these for spring. I sure hope it turns out just half as stunning as yours! xo ~Lili

OMG .. this is truly the most beautiful n creative cake i've seen till today .
Love it ………

SO cool. It is beautiful. I am going to have to try it.

Those colors are amazing! WOW!

such a beautiful cake!

So pretty! I love the presentation of this cake 🙂

This is the pumped up, 21st century version. It IS like artwork, but then again Heather, all your creations are artwork!

A real beauty! I love the looks of this cake. Wow!

This is so retro cool! I love the colors – there are some real gems in the vintage recipes.

Man, now I really don't know what cake I like better anymore, rainbow cake or this!

You need to call this "Happy Cake". it's so bright and cheerful. Sounds light and airy too. Puts a spring in my step right to my cupboard to get out all my baking supplies.

Oh my! What a bright and happy cake! I've never heard of this before, but it's so much fun, how could you resist?! Love it!

What a gorgeous piece of work. This was lovely to wake up to! I love the many facets of color and the "edginess" the shards of Jell-O give this cake. Wonderful!

Awesome! So bright and retro looking. I'll bet cutting into it had to be done very carefully. At first, I thought it was a take on some fort of Mardi Gras styled dessert. It could be!

i'm not a big fan of jell-o, but this presentation makes it look yummy! it's almost too pretty to eat…almost.

Heather, wow – this is gorgeous!!! LOVE the retro desserts! Stunning!

Are you kidding me?! This is unbelievable! Nice work, Heather! 🙂

Wow – this cake is a revelation.

I absolutely love how it looks and can only imagine how it tastes – drool worthy.

This cake looks like so much fun! I love how the shapes are just floating in the filling!

You are beyond fabulous! Just absoooolutely beyond. LOVE LOVE LOVE this cake. 🙂

I just discovered your blog while looking for recipes for St. Patrick's Day and all I can say is WOW! This is the most beautiful food blog I've ever seen. It's just stunning. Looking forward to continued reading of this inspired and lovely bright spot on the web!

I love it! My mom use to make Crown Jewel Cake! But not as fancy, with cool whip. I was never a fan, but I'm not a huge fan of jello in general. That said, I always loved cutting into it! I LOVE retro recipes! Thanks for the nostalgic memory trip…

Oh my goodness, this is such a pretty cake and I love that you did it with the jaconde sponge.

This totally makes me feel like Spring is coming (nice, after it rained ALL DAY today!) Hmm. I wonder if it would be overkill to put jello cubes inside a no-bake cheesecake filling inside the sponge…. hmmm… kinda like those retro gelatin-and-cream-cheese "saladesserts" I miss so much from my childhood!

This blog always makes me smile. 🙂

Oh my word, Heather you blow my ever loving mind.

Your desserts and pictures just amaze me…I love scrolling through your site!! It's like going on a beautiful dessert vacation.

the things you make are so so gorgeous

You did a great job on this cake. A few months ago we did a jaconde sponge for our Daring Bakers challenge and it was so much fun to make.
I love the vintage stuff too. Nicely done!

This is without a doubt the coolest cake I have ever seen and I have been trolling cooking websites and cake-related cook books for years. Absolutely amazing, definitely the next thing I want to try out!

I happened on your blog and just LOVE the photography. Went till the end in one breath to see it all. And will definitely try this cake for my friend's daughter's second birthday 🙂
Thank you!

How pretty! It's so girly! Must find a reason to make one of these! Thanks for the great post!

I used to make the broken glass cake as a kid! What a fond memory you just conjured up from the depths of my memory! Beautiful pics.

I make the 'stained glass' cake every summer, but this version with the cake looks amazing!!! TY for the idea & recipe!

Your cake is so perfectly beautiful that it looks like a doll house decoration. It's so gorgeous!