Chai Cupcakes are flavored with a medley of aromatic spices that evoke the essence of fall. Ginger, cardamom, and black pepper notes shine in both the cake and vanilla-chai frosting.

The weather is dipping into cooler temperatures this week, which means I’ll be cozying up to my favorite spicy beverage – spoiler alert! It’s not a Pumpkin Spice Latte (ha!).

Lately chai lattes are my hot beverage of choice. There’s something so comforting, almost healing, about their heady spices. I was inspired to use those same flavors in tender, buttery cupcakes.

You can find a similar sprinkle mix here, and gold baking cups here. The leaf cutter we used was from this set of Wilton pie cutters.

This recipe makes a dozen generously frosted cupcakes. The swirl of buttercream is piped with a large french star pastry tube.

A group of these gilded cakes displayed on a tiered pedestal is almost all the decoration you’d need for your Thanksgiving dessert buffet!

These cakes are buttery and tender, with all of the beautiful spiciness of a chai latte. It’s difficult to think of a more perfect cupcake for fall! 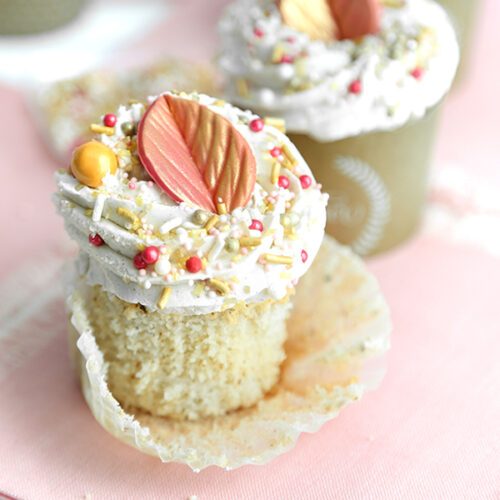 Keyword american buttercream, chai mix, confetti cupcakes
Tried this recipe?Let us know how it was!

I love chai! These cupcakes look so delicious!