It seems as if invisible hands flipped a switch, and just like that we’re having 90 degree weather. It’s nice in some ways, but it’s changed our outdoor lunch breaks to evening sunset-watching. It also has me looking more closely at refreshing treats. Ice cream cakes, ice box pies and other cold bites are foremost on my mind. Panna cotta is a favorite of mine in warmer weather. There’s nothing better than enjoying a chilly cup on a hot day.

The generous people at Numi Tea sent a box of products to my doorstep, which was the best kind of surprise for a tea lover like me! I’ve been a long-time fan of Numi because they are Fair Trade certified and also because their flavors are so interesting and potent. White Rose was the first box I sampled, and instantly I knew it would be perfect in panna cotta.

I’ve had these edible rose petals hidden in the back of my pantry for too long! They are so appropriate for this dessert and such a natural beauty. I love having ingredients like this tucked away. I once dried my own organic rose petals for desserts, but these days it saves me a bit of time and sanity to purchase them. You can find them here (I also love these pink ones).

I’ve been making choux puffs for other projects and had quite a few left over, so I decided to fill some with ice cream and top these panna cotta cups. Maybe this dessert should be called ‘Tea Party in a Cup” because that’s what it looks like – and tastes like!

You can find my tried-and-true choux paste recipe in this previous blog post. It’s also in the Sprinkle Bakes book. I used a small frilled cutter to stamp out pink and white fondant caps for the puffs, and then added a single gilded dragee to each. Fancy? Maybe. It’s hard to feel fancy with ice cream running down your arm, which is what happened when I sampled the first one – ha! (#sofancy)

The panna cotta is made with coconut milk mixed with white rose tea steeped extra-strong. I decided to give the cups a layer of sweet grenadine with just a tiny amount of rose water added. It’s nice and not overly floral.

For those who like a little cream with their cream, I added some coconut whipped cream on top of each cup. I think you’ll find it’s nice with the coconut milk in the panna cotta. 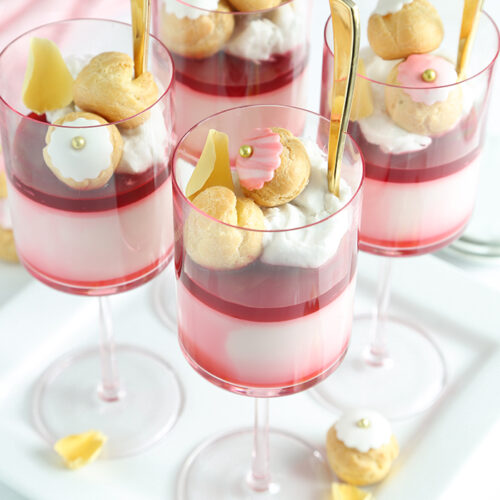 I always love how you put extra attention into details. Like the gold dragee that matches the golden spoons and the hues of red, pink and white that go so well together. Another winner for the books!