Easy Cranberry Orange Stollen is the easiest version of stollen I’ve found, and it’s perfect for busy holiday hosts. No yeast is involved so there’s no lengthy rise times. Makes two loaves – one to give and one to keep.

The stollen I enjoy each holiday season is not homemade. It’s an import from Germany that’s filled with raisins and marzipan, and because of its long trek it can also be described as – dry. I’ve come to love the flavor of this bread and count its virtues instead of its imperfections, however, I was missing out on something. This year I wanted to taste fresh stollen.

Traditional stollen requires yeast and all the time constraints that come with it – until I found a recipe for ‘Easiest’ stollen from King Arthur Flour. I read the instructions twice through and returned my bag of SAF Red to the refrigerator.

I was sold on this version for two reasons: I had all the base ingredients in my pantry and the end result is quick. I’ve been doing quite a bit of baking at night lately, and that’s when I ended up making these loaves – at around 10 p.m. You can’t really start yeast bread at that hour unless you’re prepared to be awake for four more hours, at least.

The method used to mix the dough reminds me of making scones or southern biscuits. You cut the fat into the flour, then add the wet ingredients. Then add the mix-ins. A wet ingredient in the recipe is ricotta cheese. It gives the baked bread moisture and richness. I made these loaves with natural orange flavoring, blanched slivered almonds and dried cranberries. The base recipe can be endlessly varied with your favorite flavoring, fruit and nut mixture.

Whenever a bread recipe calls for dough to be rolled to a certain size, I always lightly flour a work surface and then draw the measurement in the flour with my finger. I patted this dough ball out to an 8×7 oval.

I ended up folding the bread like the traditional yeast stollen. It worked well. Just make two indentations in the dough with a wooden spoon handle. Then fold it back onto itself accordion-style.

Fold the dough backward at the first crease, and forward on the second.

Traditional stollen has marzipan filling. If you have marzipan on hand, you could certainly pipe a line of it between the folds.

I flattened the dough just a little bit after folding it. This made it lose a bit of its signature stollen shape, but having never made the recipe before I needed extra insurance that it would bake evenly (no undercooked centers on my watch!).

For decoration, I punched out fondant in tiny star shapes. I wish I’d had marzipan because that is the usual stollen filling (next time!). I placed the stars on the bread before dusting it generously with confectioners’ sugar, and then I used a toothpick to remove some of the stars to create a pretty pattern.

The end result? A bread that is dense with fruit and nuts in the way my imported stollen is, yet not dry. Admittedly, the texture is different from traditional stollen (which remains on my bake list), but it’s one of the best quick breads I’ve ever made. I especially love that it makes two generous loaves; one for our breakfast, and another for a friend. 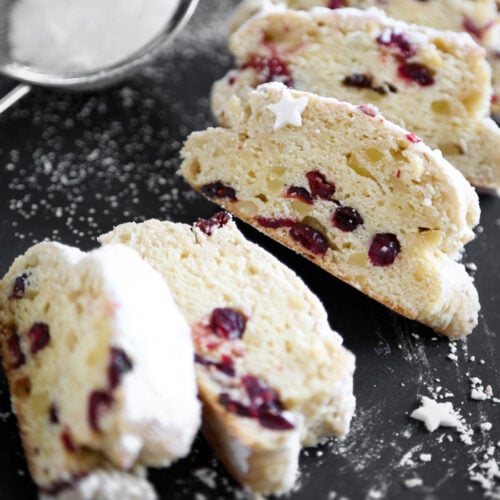 Heather Baird
This is the easiest version of stollen I've found, and it's perfect for busy holiday hosts. No yeast is involved so there's no lengthy rise times. Makes two loaves – one to give and one to keep.
No ratings yet
Print Recipe Pin Recipe
Prep Time 25 mins
Cook Time 45 mins
Total Time 1 hr 10 mins
Course Bread, Dessert
Cuisine American, German
Servings 2 loaves

Keyword dried cranberries, lorange zest, slivered almonds
Tried this recipe?Let us know how it was!

Man I wish I had known your trick for measuring dough before my hubby dipped $30 on a rolling mat from KAF — it was a gift and I love it but still….LOL

I haven't commented on your other 12 days of giftable recipes, but I thought I should as every morning I am so excited to see what you have in store for me! Thank you for making my days brighter. I have already made the chocolate peanut butter marshmallow candy and the cranberry pistachio fudge-they both turned out incredible.

Again, thank you for your always innovation recipes and beautiful photos

OMG, I am so excited about this recipe, Heather! Cannot wait to try it. Thank you! Cheers, Ardith

This is perfect, just what I've been looking for! I'm going to make these a little smaller to give away at the office. Thanks!

Love it recipe, I have to try this before Christmas!
Thank You

Just made two recipes of this to give as gifts. I felt like I had to sample one before I gave them away…so good!!! And very easy. Thanks!

Cool decorating twist with the fondant stars. I marvel at your attention to the details.You find the most amazing moments to teach new things.