If you’ve been reading this blog for very long, then you know I love a cake roll. I found this recipe in a secondhand baking textbook, and was instantly smitten. The alternating chocolate ganache and vanilla buttercream interior was so striking on the page, I had to try my hand at the technique.

Compared to the eye-catching interior, the outside of the cake seemed a little plain. That was easily remedied with a swirl of dark chocolate ganache buttercream on top and an assortment of truffles. You may also recall how much I love bonbons on cake.

Below you’ll find a pictoral of the Harlequin buttercream filling process. I think the finished cake looks quite daunting, but once you see how it’s made, you may be inspired to try it! It’s easier than it looks.

This last process shot is my favorite. I had anticipated having a real mess on my hands after rolling up the cake, but it was a relatively tidy affair. It’s important that the buttercream isn’t too lax in texture. It should have a little heft to it so it rolls up nice and clean.

One prerequisite for this recipe – you must like buttercream (no issues here!). This cake is rich, so a small slice goes a long way. The textbook suggests using slices of this cake to create a beautiful dessert tray. I can imagine slices fanned out on a fancy platter would be quite pretty. 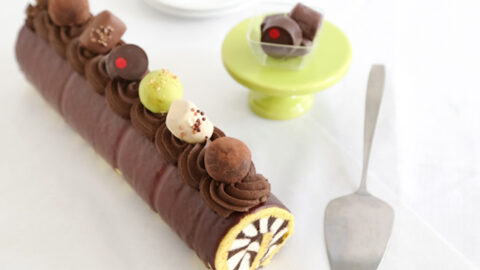 Recipe source: Professional Baking by Wayne Gisslen (6th edition) with my adaptations and notes.
Keyword chocolate buttercream, vanilla buttercream, white chocolate ganache
Tried this recipe?Let us know how it was!

Seriously amazing Heather! I see a treat that perfect for Valentine's day!

This is gorgeous!! I love all that buttercream.

Holy cow that is absolutely gorgeous! You truly never cease to amaze 🙂

Oooh this is spunky and classic all at once! Any reason to eat a truffle is a solid one in my book.

Wow, totally stunning! I love the little truffles on top!

Looks amazing! So delicious and pretty! Pinned it:)

That's a thing of beauty! Lovely!

You are a master in what you do! I can't close my wide-opened mouth…:) what to do….

Wow this is a piece of art… a yummy one 🙂

Damn woman! You are talented!!! I am staring at this wide eyed and drooling unsure of whether to pin it or to lick my screen! YUM!

Gorgeous! I've never made a roulade with stripes of frosting before. I love it and need to make one soon.

Jeez! You just get more and more incredible! Just when I don't think you can stun me anymore…you go and floor me with another creation like this.

Beautiful! What size is your sheet pan?

Omg! It looks so perfect.. I would never be able to make something like that 🙂

I love your work. I am so fan of you! Kisses from Spain

Beautiful! I love the black and white and of course, anything with bonbons is amazing!

I think I am running out of ways to express my awe for your creativity when it comes to desserts! Everything looks amazing and delicious! It's a great balance as we actually eat with our eyes before any of our other senses!

This looks amazing.. somehow all of your recipes look so perfect, I have to try them ALL!! I'm 14 and an avid baker. I just started a blog (attached to my name) and it would be amazing for you to check it out!

Lynn | The Road to Honey

Absolutely beautiful desert from the inside out. It does look somewhat simple to make but looks very elegant and complex when assembled.

I tried this recipe today. It was really easy with the instructions and many pictures you provided. 🙂 I'm super excited to complete the finishing touches and cover it with the glaze. Mmmmmm!

Everything you do has a touch of whimsy, Heather. Love this!

this just looks amazing! never seen a more beautiful roulade <3 I hope it looks about the same when I try it 😛