I can’t tell you how many times I’ve drooled over the thought of making pull-apart bread in my own kitchen. I’ve seen all different varieties – sweet and savory, lemony and cheesy- from my blog buddies and beyond. I’ve been itching to put a new spin on the recipe, and that’s the only reason I’ve waited so long to make it.

Perhaps you remember the time I made Baklava Cheesecake. All that nutty goodness seemed to improve upon something that is hard-pressed to be made better (because, cheesecake alone is pretty darn good!). I felt in the same quandary with this bread. After some meditation, I dug out my baklava filling recipe.

Here’s where I lose my modicum of correct grammar: YOU GUYS. This bread is all kinds of major. Those delicate layers of cinnamon-sugared bread? They hold pockets of nutty baklava filling. It all bakes up so perfectly together. And if that wasn’t enough, it also gets a douse of honey syrup.

I have but one complaint with most yeast dough recipes, and that’s yield size. If I’m going to spend the better part of a day babysitting dough, then I don’t want a measly dozen buns, or just one loaf of bread. So, I’ve developed this recipe to yield two loaves – one for you, and one for a friend (or one for the freezer, if you’re not feeling particularly charitable).

Here’s a look at how to assemble the bread. It doesn’t take long because it doesn’t have to be perfect. This bread is a rustic beauty so it’s really difficult to get wrong!

This recipe yields a large amount of dough, so break out your largest bowl for raising. The nut mixture is ground fine in a food processor, then zest and spices are added. Two to four pulses later, the mixture turns into a paste that clings together.

Divide the dough in half. Each half will make one loaf of pull-apart bread.

Gently flatten half of the dough with your fingers.

Roll the dough out to about 20×12-inches. As you can see, my dough is far from a perfect rectangle.

Cover the rolled out dough in an insane amount of butter. Feel weird about it for exactly zero seconds.

After a generous sprinkle of cinnamon-sugar, grab a handful of the nut mixture and crumble it over the dough evenly.

Cut the dough vertically into six even strips.

Stack the strips on top of each other. This can be a little tricky, because the dough will want to stretch as you pick it up, so I lift part of the dough with my bench scraper. You could also use a spatula.

Cut the stacked strips into 6 square-ish pieces, and layer them standing upright in a loaf pan.

Repeat the steps with the remaining dough half, and then let the dough rise in a warm place for about 45 minutes. When the dough is puffed and fills the pan, then it’s time for baking.

The bread needs to stand in the pan for a little while so all the layers will stay together when you remove it from the pan. This can feel like an eternity, especially when the toasty aroma of cinnamon and nuts is permeating ev-er-y-thing. But it’s worth the wait!

This bread definitely satisfies my autumn frame of mind, but I think it would be great for gift-giving holidays. It’s rich and dense with nutmeats and syrup, so it’d be a suitable (more delicate, more inspired) replacement for fruitcake. This bread is rich indeed, and I’ve been told by my taste-testers that a little goes a long way, but I’ll leave that up to you to decide. 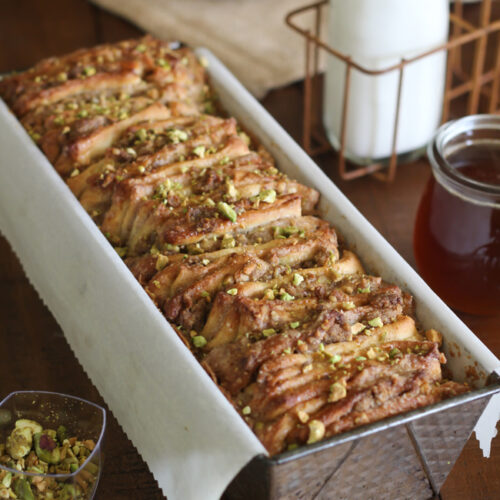 Heather Baird
Before you start, two things: 1. I love using black walnuts in this recipe. Use them if you can find them (and if you like them, they are an acquired taste.) And, 2. you may divide this recipe to make only 1 loaf of bread.
No ratings yet
Print Recipe Pin Recipe
Prep Time 45 mins
Cook Time 35 mins
2 hours rise time 2 hrs
Total Time 3 hrs 20 mins
Course Bread
Cuisine American, Greek
Servings 2 loaves

Keyword honey syrup, sweet yeast dough, walnut filling
Tried this recipe?Let us know how it was!

Yum! This looks absolutely incredible! Love the idea of a baklava filling. So creative! Can't wait to try it out!

I know this technique! There is a lot of heart and soul in this delicious loaf! I must say the photography here is outstanding, too. Pistachios always add a sprinkle of elegance, IMO. Well done!

This is something that I would pull-apart until it was all gone!! It look delicious!! Blessings dear. Catherine

Heather, this is a great idea, especially for those who are not wild about phyllo.
You make it look so easy that I just might try it tonight. Thanks! xo

This: "Feel weird about it for exactly zero seconds." Love it. And love this!

Oh my word! I love baklava, but it always looks so difficult to make. This looks like a perfect in-between recipe!

Oh mah gawd. This looks crazy good. I've always wanted to have a try at pull apart bread but this takes it to another level. I made baklava for the first time earlier this year and loved it ever since. I'm very impressed by your skill and creativity; the combo has to be a winner!

These are perfect. No like, literal perfection right here.
Seriously, pinning this asap. Totally genius.

Where did you get your loaf pans? 🙂

I need to try this!

My friend, Baklava is hard to improve upon! Challenge yourself to make it from scratch and you will be blown away. This bread looks aHmazing too!

Haven't gotten this excited about a recipe in ages! We love baklava and adore pullapart bread. Definitely sharing and saving!

This is the pull-apart loaf of my honey-soaked dreamz! This is absolutely inspired. I'm in awe.

OHMAHGAH I need this bread in my life.

I recognize the pan. I have only found them at auctions and antique stores. Many are rusty or leave cooling bread with spots as if molding. Have you found a supplier of new ones?

I usually shy away from recipes like this because they seem like so much work, but this sounds too delicious to pass up. I'm putting this on my must make list!

O.M.G! There's nothing I like better than Baklava, now this… I guess I'm off to the shops for the ingredients! It looks absolutely fabulous & you can bet that extra loaf is staying right here with me!

woooow! it looks so good! I'd die to try it!

Fantastic! Love all that sweet and nutty filling!

Holy cow that looks incredible! I will definitely have to try this. Such a brilliant idea 🙂

I found the loaf pans on Etsy. They are vintage, and in great condition. Anonymous, you are correct, many have rust spots due to age, but these were well cared for. One has a bit of scuffing on the bottom, but that's it! I believe they are Ovenex brand, but I can't find any clear markings. Ovenex did make "quilted" pans as well as the more recognizable starburst pattern. Bake King is also a good vintage brand to seek out.

I need to get over my fear of baking with yeast…….. this looks divine!!

OMG my husband would go nuts for this bread — must make!!

This looks absolutely wonderful!! I think I might try this now to get the hang of it early. This would be perfect to bring to family gatherings around the holidays.

Oh my goodness, this looks amazing!! I am totally going to make this…and maybe keep both loaves for myself 🙂

This is brilliant! I want any entire loaf to myself!

Oh my gosh that looks too good! I also have been drooling over all the different kinds of pull apart breads but have yet to make my own. This one might send me over the edge.

This looks and sounds RIDICULOUSLY delicious!! Ridiculously. And I'm super excited because I adore baklava but do NOT have the patience to butter a bazillion sheets of phyllo dough to make it myself. Can't wait to try this!

This looks so so good and this is such a genius idea!!

Oh my sweet Heaven, this looks fantastic! I love making pull apart bread and this version looks right up my alley… Thank you for this recipe. Yum!

It looks really irresistible! So so good!

Wow – I am pinning this it looks fantastic!

I loooove Baklava. It is probably one of the reasons I agree to go to Greek restaurants. Well this and the flaming cheese of course! I love that you doubled the recipe!!!!

This is such a cool idea!

This looks amazing and I'm ready to get my Baklava on. Thank you for another amazing recipe!

This bread was SO worth the wait. I completely smitten!

This looks fantastic, its on my must make list 🙂

OMG OMG OH MY GOSH…I am soooooooo gonna make this. Question: Have you tried freezing this? I would love to make a dozen loaves or maybe more, and store for the holidays. Thank you so much for sharing!

This looks utterly delicious! Would be perfect for my Virtual Bake Sale for Macmillan Cancer Support- check it out here http://www.foodnerd4life.com/virtual-bake-sale-2014/

Awesome looking bread…. I am already drooling here.
I love Baklava and I love bread………. this is a killer combination for me.
I am hoping to bake this one soon.
Thank you for sharing.

This is gorgeous! I would love to make this bread tomorrow and freeze to bake on christmas… do you think that's a possibility or will it effect the proofing? Please let me know, thank you!

hey. can we make this dough with out the use of eggs??
thanks a lot.
dhvani

I made this bread over the weekend and between 4 of us we polished off most of the loaf… After we'd eaten breakfast. It's a fantastic recipe. For those who are interested I cut the leftovers into 3 slices to freeze, I later defrosted one in the microwave for 30 seconds and surprisingly it came out perfectly and did not need toasting. I would also guess if you froze a whole loaf and reheated as whole in the oven it would come out the same as fresh baked, I have tried this with other loaves.

Can you use store bought biscuit dough?

Baklava is the most yummy treat , I cant wait to try it 🙂