I’ll be the first to admit that I’ve been to Starbucks a little too often since the Pumpkin Spice Latte has been back on the market. There’s something so lovely about spiced coffee… it makes you feel cozy and assures you that fall has truly arrived.  I’ve been so impressed with the many food bloggers who have tried their hand at a copycat recipe, and there are a few I can’t wait to try. (Like this one!)

Needless to say, this dessert was inspired by that same cozy drink, and it was an instant favorite at my house.  I’ll be bringing one (or two?) home for the Thanksgiving table this year.

This cheesecake is one of the easiest baked varieties I’ve ever tried.  I didn’t experience any surface cracking and I didn’t need to adjust the baking time at all.  I half expected something to go wrong due to the adaptations I made to the recipe – but no.  I didn’t even use a water bath!

An easy way to dress up a cheesecake (or most any cake) is to cut strips of wax paper and lay them across the cake evenly before dusting generously with powdered sugar.  No special equipment necessary! Gotta love that.

It’s so nice when a dessert turns out exactly the way you hoped it would. I piped on a little freshly whipped creme and then sprinkled the entire cake with nutmeg and cinnamon.  Instant coziness on a plate! 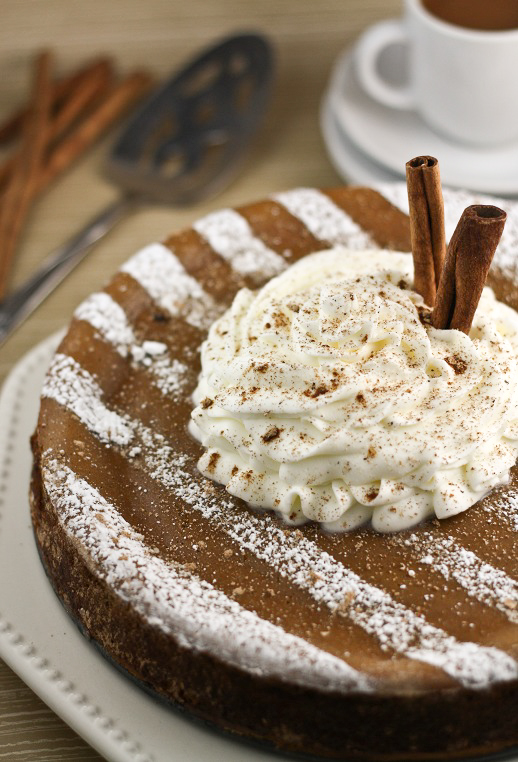 Preheat oven to 350 degrees.  In a food processor, blend ingredients until mixture resembles coarse sand.  Press into the bottom (not up sides) of a 9-inch spring-form pan.  Bake 10 minutes.  Cool completely.

3 tsp. espresso powder, or Starbucks VIA instant coffee (for authenticity)

Using an electric hand mixer, combine the cream cheese, 1/2 cup of sugar and vanilla in a medium bowl and mix until smooth. Mix eggs in one at a time, blending well after each addition.

Remove one cup of the mixture and transfer to another bowl.  Add the espresso powder to the 1 cup of filling and mix until coffee has dissolved and is uniform in color.  Set aside.

Blend 1/4 cup of sugar, pumpkin, cinnamon and allspice into the remaining filling.  Pour the pumpkin mixture on top of the crust in the spring-form pan.  Top pumpkin mixture with the 1 cup coffee filling mixture.

Bake for 55 minutes or until filling is set. The cheesecake will puff up in the middle a little bit as it bakes and then relax back down as it cools. Run a knife around the edge of the pan for easy un-molding.  Allow the cheesecake to cool before removing rim of spring-form pan.  Chill until ready to serve.

1 Cinnamon stick broken in half (decor only)

I have been getting too many pumpkin spice lattes too.. and I'm not even a huge coffee fan! I think I would prefer to eat it in cheesecake form.

ok, this really couldn't be more gorgeous…i love the wax paper trick! i'll be utilizing that one for sure 🙂

Oh goodness…we are such suckers for any seasonal Starbucks drink…but we're even bigger suckers for seasonal cheesecakes!! This is GORGEOUS and we can only imagine how spicy, sweet and perfectly fall it tastes!

Beautiful cheesecake Heather! What a great idea! You know, I've never tried a Pumpkin Spice Latte. It's criminal, I know. I should try one or maybe this cheesecake! Yum!

This sounds so delicious. I'll have to give this a try. Thanks for sharing.

Beautiful! I bet it was delicious!

oh my goodness this looks so wonderful

Adorable, and I love the decoration – I will be suing that for sure.

Definitely going to be utilizing that wax paper trick as well at some point this fall! I also love the idea of including the cinnamon sticks in there as well. Love it!

this looks absolutely amazing! i found pumpkin last year (never craved it prior to that), so now, anything pumpkin, this cake included, is something i want to devour! love the wax paper tip! you have so many ideas up your sleeve!

I really love the way you decorated your cheesecake. I can't wait to do the same soon.

Like you, I love Fall and I love how spice coffee signifies the beginning of Fall.

I absolutely love it, and your pictures are beautiful like always.

Which, I'm not. Therefor, I would love this cheesecake!!

Just wanted to let you know your cheesecake is going on my menu this weekend. Do you mind if I blog about it?

Sure, I would love that! Hope you love it as much as we do. 🙂

So lovely! The stripes are perfect 🙂

Can the crust be done with just almond flour or is there a reason for needing to use regular flour? I was just thinking this may work as a nice desert for a family member with celiac disease… thanks for the great looking recipe!

this is great…& i have the starbucks via (from my too many trips to bucks!)…lovely presentation… super yum!
does your cheesecake top ever split?

I love the sounds of this cheesecake!!! Great job and lovely photos!!

Beautiful cheesecake! I love anything pumpkin, am a big latte fan, and cheesecake is an all-time favorite decadent dessert of mine :).

I just bought all the stuff to make this 🙂 Im excited, but found a small confliction in the recipe. It calls for 3/4 cups sugar divided, but in the instructions it says to add 1/2 cup at one step and 1/2 cup later on. Which would total 1 cup. Was one of these supposed to be 1/3?

To Carol,(hi!) I don't see why you couldn't make the crust with just almond flour, though you may not need the food processor. I found this recipe (below) on Celiac.com. The directions are a bit different than mine, but it may hold together better with the addition of melted butter. You could add the 1 tsp. of cinnamon called for in my crust recipe for similar flavor. 1 1/4 Cup almond meal (or very finely ground almonds, un-blanched) 1/3 Cup butter 3 Tablespoons sugar Directions: Preheat oven to 350F. Melt butter and combine with almond meal and sugar, mix well… Read more »

Oh dear. To answer Aisleen and yojenkim I have a typo in my recipe. It's supposed to be 1/4 cup added in with the pumpkin – Sorry! I'm fixing it now! Thanks for catching my mistake and letting me know!

Ok it is now fixed. Recovering from my mini panic attack. 🙂

That cheescake looks luscious, that wax paper tip is wonderful and your photography always blows me away. You have such an awesome blog. ~Lili

Holy goodness! I can't wait to try this! – Carrie

I don't eat cheesecake, but that is absolutely lovely! Thanks for sharing!

Oh goodness, Heather — EVERYTHING you make is just GORGEOUS!!! I know I've said it before, but I will say it again: you are the Master! And thanks for sharing the tip on decorating the cake like that with the powdered sugar. I never would have thought of that!
Best,
Gloria

This looks lovely … like all the other stuff u've made and generously posted on your blog … i've been following u'r blog for a while now … brilliant stuff !!!

New to your blog and I'm in loooovveee!!

This has been bookmarked, yum!

Beautiful photography! Happy I found you!

Your cheesecake sounds exquisite! I love the flavors, and your presentation is gorgeous.

exscuse me please,whilst i pass out!!
This looks beautiful,sounds beautiful and i want it!!
I LOVE IT,the flavour and themention of starbux just makes me want to cry with joy!! MMMMM

Do any changes need to be made for high altitudes? I can't wait to try this, it looks delish!

You may have to increase the baking time slightly. If the middle of the cheesecake is still very jiggly at 55 minutes, you'll need another 5-10 minutes at least. Other than that, I think you're good to go!

Thanks for your question!

Totally made this today! Oh my YUM. 🙂

I am a pumpkin spice latte girl and this looks perfect!! you really can't go wrong with cheesecake.

Holy wow! This is BEAUTIFUL.

With those spices it has just got to be a winner as I looooovvee those flavors! Perfect call cake!

I love the way you decorated this fabulious cheesecake! Thumbs up for sure.

Thank you so much for the heart shaped pan. Needless to say, I love it! I cant seem to put it away just yet, It's too pretty just sitting on the stove. 🙂

This looks amazing! I bet the pumpkin/espresso combo is to-die-for!

This looks so good, so dense and delicious. So many pumpkin cheesecake recipes are more like a light chiffon fluff. Was this really as swoonably delicious as it appears?